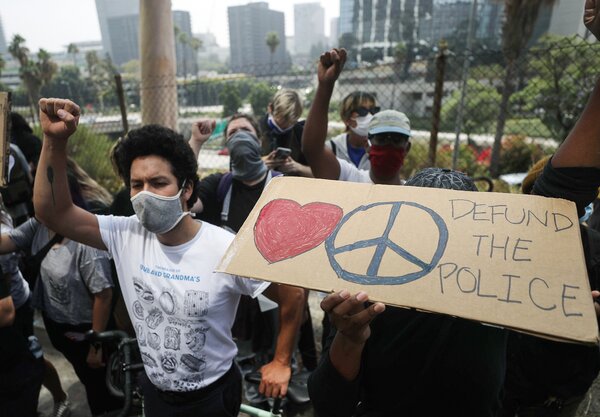 Even as difficult negotiations continue on plans to reopen schools across California, student activists, community organizers and teachers in Los Angeles celebrated what they said on Wednesday was a major victory in a monthslong push to do something thousands of protesters called for last summer: defund the police.

On Tuesday, the Los Angeles Unified School District leaders approved a plan to cut a third of its school police officers and instead divert $25 million to programs supporting students of color, and specifically Black students.

The plan approved on Tuesday eliminates 70 sworn officers, who have arrest powers; 62 nonsworn officers; and one support staff member, leaving 211 officers on the district’s force. Officers at secondary schools in Los Angeles will be replaced with “climate coaches” from the community who will mentor students, help resolve conflicts and address implicit bias.

“I feel accomplished, I’m excited,” said Kamarie Brown, a Crenshaw High School senior who is the district’s first Black female student school board member. “I feel like people in charge are paying attention to what the people who are experiencing this have to say.”

In doing so, Los Angeles joined a growing number of cities across the country that have reduced the presence of armed police officers in school hallways.

[If you missed it, here’s a look at calls to defund the police from the summer.]

Ms. Brown told me she’s thrilled that more funding will go toward programs that help build a “strong campus climate,” and focus on things like conflict de-escalation and relationship building rather than punishment.

Opponents of the move don’t disagree with those goals. But they emphasized that police officers on campuses across the sprawling district — which covers more than 700 square miles — are meant to help keep students safe from outside threats, and make them feel comfortable talking with the authorities when they are victims of crimes.

“I think part of the challenge is people see us as somehow wanting to enforce the law on students, and that couldn’t be farther from the truth,” said William Etue, vice president of the Los Angeles School Police Officers Association.

The vast majority of the time, Mr. Etue said, police officers are called by teachers or administrators for help. He acknowledged that there may be racial disparities in which students are disciplined or suspended, but that’s part of a broader conversation for school leaders.

[Read more about the debate over whether police officers make schools safer or more dangerous.]

Still, for parents like Afreca Howard, whose son is a seventh grader at Audubon Middle School, it doesn’t matter how police officers get involved with students. Their presence can cause trauma.

She said that her family was experiencing a period of homelessness and had mental health needs when her son was in third grade in the district and that he was “stigmatized.” She said that at one point, her son was handcuffed to discipline him.

Ms. Howard said school administrators told her that they didn’t call the police — they were already there.

“They put handcuffs on my 9-year-old?” she told me.

Ms. Howard said that the district’s move to invest more in other programs for students of color made her optimistic. She hopes that the work will continue — that leaders will consider offering students mental health education.

[Read about why reopening schools in the West Coast’s biggest cities has taken so long.]

A spike in Covid-related deaths at a state-run psychiatric hospital in Fresno County has angered and alarmed patients. They blame hospital staff for an outbreak that infected hundreds and killed more than a dozen patients over the past six months. [The Sacramento Bee]

Gov. Gavin Newsom and legislative leaders have agreed to a $9.6 billion pandemic aid package that would provide $600 checks to millions of low-income Californians, and grants and tax deductions to businesses struggling through the pandemic. The Legislature could vote as early as next week. [The San Francisco Chronicle]

Newsom administration officials said they would evaluate the role of California’s landmark carbon trading program as the state examines and updates its climate road map. [CalMatters]

California has a statewide eviction moratorium and there is government rental relief. Even so, more than one in seven renters in the state were behind on their rent payments last month, according to Census Bureau surveys. Some renters have accumulated high levels of debt with no clear way out. [CalMatters]

Orange County, after five weeks of improving coronavirus metrics, is getting closer to meeting the threshold to move to a less restrictive tier of the state’s four-tier system. [The Orange County Register]

The Los Angeles Zoo reopened, again, Tuesday morning, with capacity capped at 2,400 people per day, and a maximum of 400 allowed in per hour. It closed on Dec. 7 for the second time because of the pandemic. [The Los Angeles Times]