The day after the Centers for Disease Control and Prevention announced that fully vaccinated people could safely go outside without masks, I headed to the street with my 1941 Remington typewriter, folding chair and a little sign that read, “Your Life Story in About a Minute.”

After 13 months of basically hiding, I figured Midtown at midday would be a good spot to get back among the living, so I chose the main branch of the New York Public Library and set up in front of one of the lions.

Sitting there with my mask on so as not to worry anyone (even though fully vaccinated), I counted the number of people walking by: eight per minute. On Fifth Avenue!

Back when I used to write stories on the street for a living, I never would have set up in such a surprisingly desolate spot. But this time I wasn’t doing it for the money, so I stayed.

After 10 minutes, I took my mask off, because it was muffling my voice as I tried to catch people’s attention. Finally, a middle-aged man in a motorized scooter stopped to look at me from about eight feet away.

“What are you doing here?” he asked.

“Is there a charge?”

“Whatever you think it’s worth.”

He rolled a little closer and introduced himself as Ron. He told me how he had spent most of his life in and out of jail, beginning as a juvenile. Selling drugs and stealing to get by, he eventually became a crack addict. But he had taken advantage of his latest detention to get clean, for six months so far. Now, he said, he wants to be a motivational speaker.

This is what I had been missing: people and their stories. The freelance science reporting that I do for magazines and newspapers (including this one) had kept my family afloat through Covid-19, but I missed the peculiar literary form I had dreamed up almost 40 years ago: the 60-Second Novel.

It started in Chicago, when I had the crazy idea to try writing instant stories for passers-by on Michigan Avenue. (I realize that street poets are a common sight now, but not back then.) To my surprise, it clicked. I started doing it most weekend afternoons and evenings through the summer of 1983, keeping a carbon copy of every story. The following spring I quit my job, packed my things and became a full-time performance writer on the sidewalks of New York.

Soon I was getting hired to do my thing at parties, where I sometimes met celebrities like Chuck Schumer (who told me he’s a nerd), Donald Trump (who mocked me, jabbing his fingers in the air as if typing) and Jeff Bezos (who made me sign a nondisclosure agreement). It was great fun, and it left me plenty of time to do my science writing. By the end of 2019, I had written more than 50,000 miniature life stories. 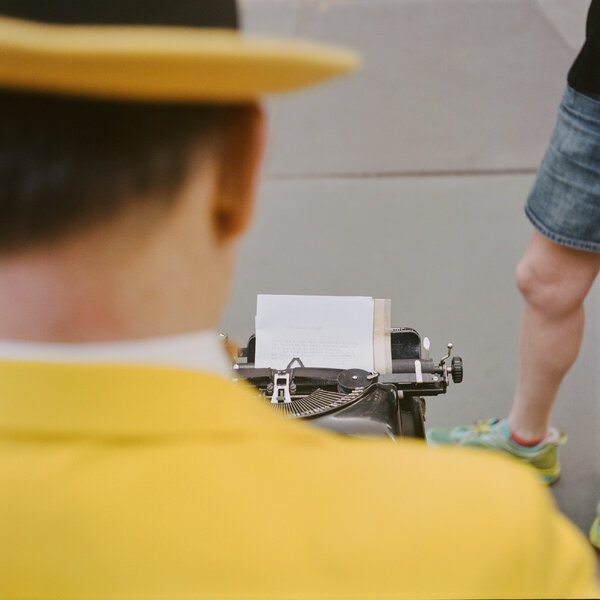 And then the pandemic shut it all down. Over a year later, with the fancy-schmancy parties where I typically wrote my stories still on hold, I could no longer stand sheltering in place with my wife, 14-year-old middle schooler and 17-year-old dog who had taken to peeing on the floor. It was time to hit the street again.

Forlorn as Midtown was, the people who did stop to engage with me were, to paraphrase the Talking Heads, same as they ever were.

There was 17-year-old Diego, whose mother had come from Mexico, and who had already appeared on Broadway in “School of Rock” and in a movie due out next year starring J-Lo and Owen Wilson.

Zach, who had done a commercial for Pantene in which he was dressed first as a leather-jacketed macho man and then in makeup and a dress.

JT and Michelle, the madly-in-love Montreal college students, who had spent almost every minute together since swiping right on Tinder six months ago. (She cried when I read them their story.)

Atul from India, who didn’t feel ready when his family rushed him to marry Madhu when he was just 21. Now he had grown children, and I asked if he loves her. “We are like every couple,” he said. “Sometimes we love, sometimes we fight.” (Annoyed that I took nearly three minutes to write his story, he almost walked away before I finished.)

Kaylee, covered in body art, had worked at some stupid retail job that she hated and was thankful that unemployment had permitted her to focus on her poetry.

Mouna was dressed so casually that I guessed that she might be a barista, but she told me she had just finished medical school.

Shanike sparkled in sequins on her shirt and on her shoes.

And Alice the Australian: Her goal in life, she told me, is to be happy.

How glorious it was to be back among the living, the strivers, the hopeful, the lovers and the losers who won’t say “uncle.”

As for Ron, 15 minutes after I had typed up his story, he came rolling back on his scooter to show me a set of business cards he’d had printed at Staples. I was the first to receive one. Under his name, it said, “Motivational Speaker.”

“I tell people you have to align yourself with the universe,” he said. “Get a life realignment like your car gets a wheel realignment.”

And then he slipped me a dollar.