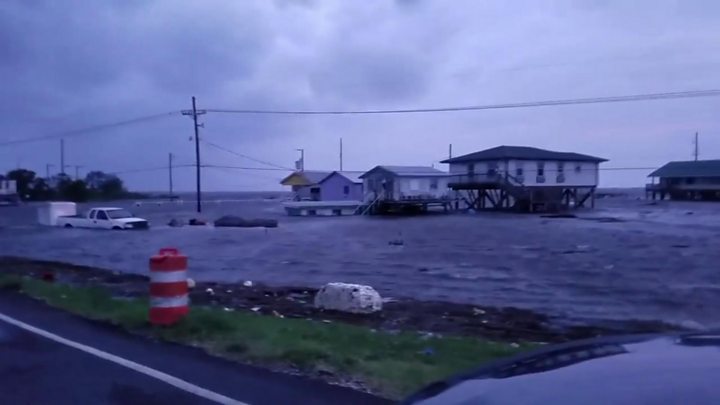 A storm approaching the Louisiana coast has strengthened into a category one hurricane, US officials say.

The system is crawling north-west at a speed of just 6 mph, dumping heavy rainfall as it tracks inland.

The storm is set to most heavily impact an area west of New Orleans and officials warn floods and storm surges could be life-threatening.

Thousands have been evacuated from at-risk areas and others have been told to shelter in place.

More than 60,000 households were already without power on Saturday morning.

All flights in and out of Louis Armstrong New Orleans International Airport have been cancelled.

What is the latest?

In an update at 10:00 local time (15:00 GMT) the US National Hurricane Centre (NHC) confirmed Storm Barry had strengthened into the first hurricane of the 2019 Atlantic season.

Local journalists shared images of flooding in some residential areas and roads, as the rain bands closed in.

Louisiana’s most populous city, New Orleans, looks set to avoid a direct hit – with the worst expected further west near the city of Lafayette instead.

Forecasters have warned the storm system could bring 25 inches of rain in places.

Louisiana’s governor, John Bel Edwards, said on Friday that he was confident the state was prepared for the storm.

“But that comes with a caveat. You never know what Mother Nature is going to serve until she has served it,” he said at a news conference. 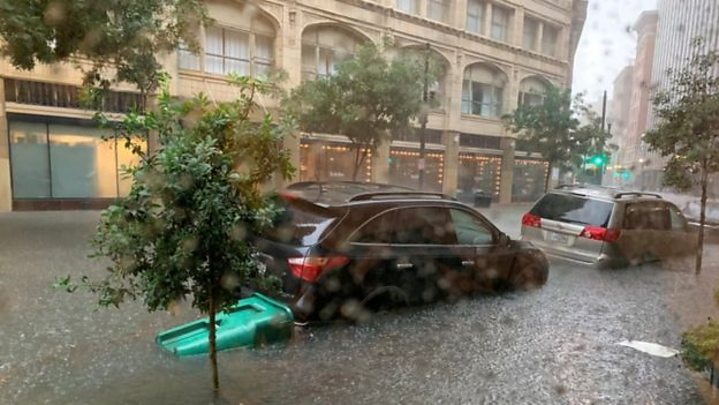 With recent flash-flooding and heavy rainfall, there was particular concern about the flooding risk in New Orleans.

The National Weather Service (NWS) earlier warned the Mississippi River could crest at 19ft or 20ft during the storm, but on Friday revised their estimate down to 17.1ft.

No city-wide mandatory evacuation is in place, but locals were told to shelter in place and stock-up on essentials.

After hitting Louisiana, Hurricane Barry is expected to weaken as it moves inland.

Is climate change to blame?

While there is no definitive link between climate change and Storm Barry, rising temperatures are increasingly a factor in making the impact of events like this more intense.

As the air has warmed over recent decades it is now able to hold much more moisture, meaning tropical storms are pre-loaded with large amounts of rain.

The warming world is also making these storms more sluggish. Over the past seven decades tropical events like Barry have slowed down, going 20-30% less quickly over land in North America.

This is what happened with Hurricane Harvey in 2017, when it weakened to a tropical storm and then stalled for days over the Houston area dumping enormous quantities of rainwater which cost lives and did huge damage.

Sea levels have also increased as a result of global heating, so if winds are blowing towards shore, this makes flooding much more likely during high tides.

Joe Biden may still be the Palmetto State’s comeback kid. Despite disastrous performances in other early states, the former veep maintains a large lead in…