Lubomir Kavalek, a chess grandmaster who fled Czechoslovakia after the 1968 Soviet invasion and, after moving to the United States, became a three-time national champion, died on Monday at his home in Reston, Va. He was 77.

His wife, Irena Kavalek, said the cause was cancer.

From the mid-1960s until about 1980, Mr. Kavalek (pronounced kuv-AH-lick) was consistently among the best chess players in the world, winning more than a dozen major international tournaments. His world ranking peaked at No. 10 in 1974.

He was also one of the first and most elite players to flee the Soviet bloc for the West.

Mr. Kavalek was playing in a tournament in Poland in August 1968 when the Soviet tanks rolled into Czechoslovakia to put down the rising tide of political liberalization and dissent. Ms. Kavalek, then Irena Koritsanska, was with him in Poland. It was immediately clear to them, she said. that they did not want to stay in the East.

As soon as the tournament was over, they drove back to Prague, where Mr. Kavalek paused only to gather a few things. He then jumped in his car and drove to Austria. He had a visa to enter the country, where he was expecting to take part in a tournament in a few weeks. From there he went to Munich to stay with his father, who was working for Radio Free Europe and whom he had not seen in 20 years.

Only 24 hours after leaving Poland, Mr. Kavalek was safely in West Germany.

Ms. Koritsanska left Czechoslovakia a month later for Amsterdam on a student visa. She did not return, living there for four years and seeing Mr. Kavalek from time to time.

Mr. Kavalek stayed with his father until 1970, when he emigrated to the United States with help from the United States Chess Federation. He eventually became a citizen. Ms. Koritsanska was able to join him in 1972, and they were married shortly afterward.

From the moment he entered the United States, Mr. Kavalek, who was often called Lubosh, was among the country’s top players.

In 1972, he tied for first in the United States Championship. It was a qualifying tournament for the cycle for the world championship, but Mr. Kavalek lost the playoff to Robert Byrne. He tied for first again the next year, this time with John Grefe.

Mr. Kavalek became a member of the biennial United States Chess Olympiad team and played for it seven times from 1972 to 1986, including three times as the top board. He played on the 1976 team that was the first American team to win the gold medal since the 1930s, though the win was tainted: The Soviet bloc countries had boycotted the competition because it was held in Israel. 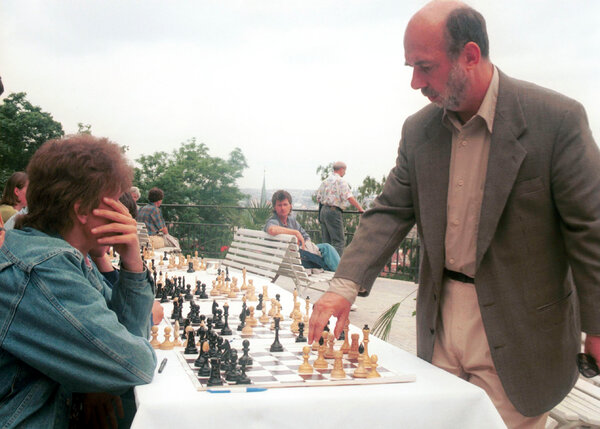 Lubomir Kavalek was born in Prague on Aug. 9, 1943, the only child of Ludomir and Stephanie (Kreipl) Kavalek. His father worked in the film industry, and his mother was a nurse.

When he was 5, his parents split up and his father left for West Germany.

Mr. Kavalek was about 11 when he started playing chess. He joined a chess club in his school and took to the game instantly.

In 1962, just after he turned 19, he won the Czechoslovak championship, becoming the country’s youngest champion. He won the title again in 1968, shortly before he fled the country.

In 1965, he was awarded the title grandmaster, the game’s highest, by the World Chess Federation, the game’s governing body. At the time, there were fewer than 100 grandmasters in the world; there are now more than 1,700.

He studied communication and journalism in Czechoslovakia and, when he arrived in the United States, studied Russian literature for two years at George Washington University in Washington.

During his first two years in the United States, he worked for Voice of America. As part of his work, he covered the 1972 world championship match in Reykjavik, Iceland, between the American Bobby Fischer and the Russian Boris Spassky. He also helped Mr. Fischer analyze some of the games during the match. (They had played each other once, during a world championship qualifying tournament in 1967. That game ended in a draw.) After Mr. Fischer won and became world champion, he gave Mr. Kavalek an exclusive interview.

In 1973, Mr. Kavalek became a full-time chess professional. In addition to earning some tournament prize money, he supported himself by writing about chess, particularly in his later years. He wrote several chess books and articles for Chess Life, the official magazine of the United States Chess Federation, and British Chess Magazine. From 1973 to 1986, he was editor in chief of chess publishing for a small company, RHM Press.

In addition to his wife, Mr. Kavalek is survived by their son, Steven, and a grandson.

In 1979, Mr. Kavalek tried his hand as a chess promoter, organizing an elite 10-player tournament in Montreal that featured most of the world’s top players, including Mr. Kavalek himself. The tournament was won by Anatoly Karpov, the reigning world champion.

The format was that each player faced all the others twice. In the first half of the tournament, Mr. Kavalek finished last, scoring only 1.5 points out of a possible 9. But in the second half he roared back, playing the best of anyone to score 6.5 points.