Luis Palau, who rose from preaching on street corners in Argentina to become one of the most significant evangelical leaders in the generation following his mentor, Billy Graham, died on Thursday at his home in Portland, Ore. He was 86.

His death, from lung cancer, was confirmed by the Luis Palau Association, the ministry he founded in 1978 with $100,000 in seed money from Mr. Graham.

Though his headquarters were in Oregon, Mr. Palau was often called “the Billy Graham of Latin America.” He addressed that region’s 120 million evangelicals through three daily radio shows (two in Spanish, one in English), shelves of Spanish-language books and scores of revival crusades, in which he might spend a week, and millions of dollars, preaching in a single city. The Luis Palau Association estimates that he preached to 30 million people in 75 countries.

“I don’t think it’s hyperbole to say that he was the premier evangelical in the Spanish-speaking world, maybe in the whole world, second only to Billy Graham,” the Rev. Gabriel Salguero, president of the National Latino Evangelical Coalition, said in a phone interview.

But if Mr. Palau followed in Mr. Graham’s footsteps, he didn’t copy them. Instead he charted a course between the conservative evangelism of his mentor and a more socially conscious Christianity that found deep roots in communities of color, both overseas and in the United States.

And whereas Mr. Graham’s events were formal affairs, with choirs and long sermons, Mr. Palau’s were casual family-oriented festivals, with pop music and extreme sports demonstrations — he was a pioneer in welcoming Christian rock bands to his stage. In March 2001, he attracted 300,000 people to BeachFest, a two-day festival in Fort Lauderdale, Fla., aimed at students on spring break.

Speaking to the faithful, he could be chatty and self-deprecatingly funny — another contrast with the more dignified Mr. Graham, and a departure from the stereotypical image of an evangelical preacher — and those qualities helped him reach beyond his flock to convert millions more.

“He remained theologically orthodox without being obnoxious, which is not something we evangelicals always do well,” Ed Stetzer, the executive director of the Wheaton College Billy Graham Center, said in an interview.

Mr. Palau was especially aware of the common assumption that evangelicals are rabid right-wingers — one reason, he said, that he often held his festivals in bastions of liberalism like New York City, the Pacific Northwest and New England. In 2001 he held a $2.5 million weeklong campaign across Connecticut.

“In New England, when you say ‘Christian,’ they think ‘those maniacs on the right,’” he told The New York Times in 2001. “I feel a challenge in Connecticut. I want to show that we are not maniacs but that we are well educated. This is a rational faith, but a faith that fires you up.” 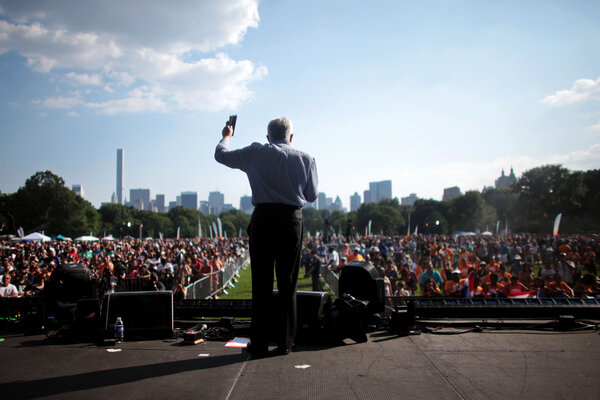 Luis Palau Jr. was born on Nov. 27, 1934, in Ingeniero Maschwitz, Argentina, a town about 30 miles north of Buenos Aires. His family spoke English and Spanish at home. His father, a businessman, was the child of Spanish immigrants; his mother, Matilde Balfour de Palau, came from Scottish and French stock.

His father died when Luis was 10, not long after his parents had converted to evangelical Christianity, and the family slid into poverty. Mr. Palau remembered his mother cutting pieces of bread and steak eight ways — one morsel apiece for her, him and each of his six siblings.

Luis converted to the faith in 1947, after a summer-camp counselor had taken him under his wing. He was 18 when he heard Mr. Graham for the first time, on a shortwave radio, and the experience inspired him to take up preaching.

After high school he got a job at a bank in Córdoba, in western Argentina, and in his off hours he started sermonizing on street corners. He eventually persuaded a local radio station to put him on the air.

At a Bible study group he met Ray Stedman, a writer and pastor from Palo Alto, Calif., who persuaded him to come to America to attend a seminary. In 1960 he enrolled in a one-year program at Multnomah School of the Bible (now Multnomah University) in Portland, Ore.

There he met Patricia Scofield, a former teacher and fellow student. They married in 1961. She survives him, along with their four sons, Andrew, Kenneth, Keith and Stephen; his sisters, Matilde, Martha, Catalina, Margarita and Ruth; his brother, Jorge; and 12 grandchildren.

Returning to the Bay Area, Mr. Palau met Mr. Graham, who was preparing for a crusade in Fresno. Mr. Palau interned with him for six months, translating Mr. Graham’s sermons when he addressed Spanish-speaking audiences. Mr. Palau was ordained in 1963.

He continued to work as an interpreter for Mr. Graham for the next 20 years, even after he became a minister with Overseas Crusades (now known as OC International), a missionary organization. Over the next decade he and his family moved around Latin America, setting up churches and holding citywide campaigns similar to Mr. Graham’s in the United States.

The Palaus returned to Portland in 1972, and he served as president of Overseas Crusades from 1976 until he founded his own ministry two years later.

Partly in deference to Mr. Graham’s dominant hold on American evangelicals, Mr. Palau spent the first 20 years of his ministry focused overseas. Along with crusades in Latin America, he ventured to Europe and the Middle East and was one of the few Western religious figures allowed to preach in the Soviet Union.

Like Mr. Graham, he kept his crusades apolitical, in terms of both his message and the people he was willing to work with. He befriended a liberal Argentine priest named Jorge Bergoglio long before he became Pope Francis. But he also drew criticism for collaborating on a 1982 crusade in Guatemala with the dictator Efraín Ríos Montt, who had recently taken power in a coup.

As Mr. Graham moved into semiretirement in the late 1990s, Mr. Palau turned to the United States. He also moved away from the Graham model of crusades: He shortened his events to just a few days and called them festivals. Held in city parks, they might feature skateboarding, family activities and Christian hip-hop; each night he would preach for about 45 minutes, right before the main act.

Mr. Palau was more than just Mr. Graham’s successor in the United States. As a Latino, and with a more socially engaged ministry, he was more successful in reaching the country’s growing number of Latinos, who today make up about 11 percent of America’s evangelical population.

“His ministry was able to bridge gaps between whites and Latinos in a way that suburban white ministers could not, especially in the 1980s and ’90s,” said Darren Dochuk, a historian at the University of Notre Dame.

In 2015, Mr. Palau organized an event in New York called CityFest. In preparation, he moved to the city for two months, visiting churches, meeting with Mayor Bill de Blasio and setting up community-service projects.

The festival drew 60,000 people to Central Park, the legal limit, and about 120,000 more to events in places like Times Square, Radio City Music Hall and Flushing Meadows in Queens.

“The world thinks, and I used to think, that New York is all secular,” Mr. Palau told The Times. “There’s a hunger and a desire to talk about spiritual things, which surprised me about New York.”