The journalist Martin Bashir has left the British Broadcasting Corporation, as it prepares to publish the findings of an investigation into accusations that he used dishonest tactics to secure a major 1995 television interview with Diana, Princess of Wales.

In an email to colleagues on Friday, Jonathan Munro, the BBC’s deputy director of news, said that Mr. Bashir had stepped down from his position as the BBC’s religion editor and was leaving the corporation.

“He let us know of his decision last month, just before being readmitted to hospital for another surgical procedure on his heart,” Mr. Munro wrote. “Although he underwent major surgery toward the end of last year, he is facing some ongoing issues and has decided to focus on his health.”

Mr. Bashir, 58, could not be immediately reached for comment. The BBC reported in November that he had been recovering from quadruple heart bypass surgery and complications from Covid-19, which he had contracted earlier in the year.

Mr. Bashir’s departure came six months after the BBC announced that it had appointed a former judge to lead an investigation into accusations that Mr. Bashir used deceptive tactics to convince Diana to participate in the 1995 interview.

During the interview, which was hailed by British journalists at the time as “the scoop of the century,” Diana spoke candidly of her “crowded” marriage to Prince Charles, admitted to an affair and told how, in her despair, she suffered from “rampant bulimia.”

An estimated 23 million people watched the interview, which rocked England and catapulted Mr. Bashir to international renown. He went on to interview Michael Jackson for a 2003 television special and to work in the United States, at ABC and MSNBC, before resigning from MSNBC over comments he made about Sarah Palin, the former Republican vice-presidential nominee.

Since 2016, Mr. Bashir had been working for the BBC, where his career began in the late 1980s, according to the broadcaster.

In November, longstanding questions about the methods that Mr. Bashir had used to earn Diana’s trust came under renewed scrutiny in a two-part documentary that was broadcast on the British network ITV.

The documentary contended that doctored bank statements — purportedly proving that royal employees close to the princess were being paid to spy on her — were used to gain Diana’s confidence.

Michael Grade, a former BBC chairman, called the allegations “a very, very serious matter,” in a radio interview with the corporation in November, adding that they left “a dark cloud hanging over BBC journalism.”

Asked on Friday about the status of the investigation, the BBC’s press office said in an email: “We will publish it very soon and will confirm a date shortly.”

Even before the interview was broadcast in 1995, it was the subject of widespread speculation and consternation. 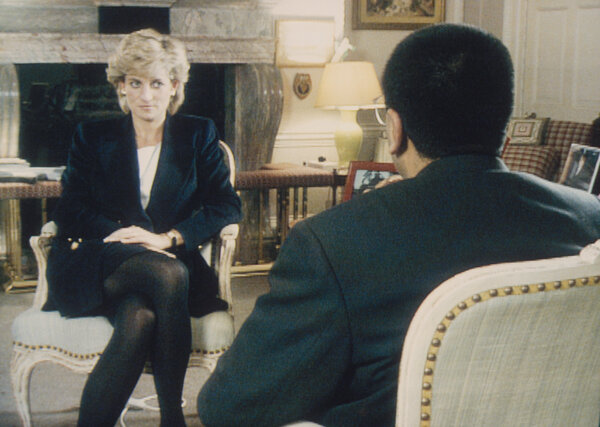 The BBC ordered an investigation into allegations of impropriety in 1996, and Mr. Bashir was cleared of wrongdoing by the corporation’s news chief at the time, Tony Hall. Mr. Hall later went on to lead the BBC, and retired as its director general in August 2020.

Internal documents obtained in a Freedom of Information request by the journalist Andy Webb, who directed a documentary about the interview for another British network, Channel 4, show that Mr. Hall cleared Mr. Bashir while punishing a graphic designer, Matthias Wiessler, who had produced the altered bank statements.

According to the documents, reported in the ITV documentary, Mr. Hall said that while Mr. Bashir was “an honest man” who was “deeply remorseful,” Mr. Wiessler would never work at the BBC again because he had spoken to the media about the events.

Speaking publicly for the first time, Mr. Wiessler said in an interview for the ITV documentary that the internal documents made it clear that he had been used as a scapegoat. He went on to say that Mr. Bashir had asked him to mock up bank statements to be used as props for “filming purposes.”

When he approached BBC managers about his concerns, he said, he was cautioned not to speak to the media. But after an unsatisfying confrontation with Mr. Bashir, he ultimately spoke to a journalist, which helped set off the first inquiry.

“I quite clearly felt that I was the one that was going to be the fall guy in this story,” Mr. Wiessler said. His contract was not renewed, and he ultimately left the industry when work dried up, he said.

Diana’s brother, Charles Spencer, is among those who have accused Mr. Bashir of using deception to land the scoop.

“I knew that Martin Bashir used fake bank statements and other dishonesty to get my sister to do the interview,” he said on Twitter in November, adding that he had only recently discovered that the BBC not only knew, but “covered it up.”

In March, the Metropolitan Police Service said it would not open a criminal investigation into the matter.

Mr. Bashir’s departure came after a high-profile and sometimes inflammatory career. While at ABC, he was suspended after making comments considered crude and sexist at a dinner for Asian-American journalists.

In 2013, he resigned from MSNBC after comments he made about Ms. Palin generated a firestorm.

Mr. Bashir had criticized Ms. Palin for statements she had made comparing American debt to slavery, saying she deserved the same kind of humiliating and degrading treatment that some enslaved people faced. He later said he had made “ill-judged comments.”