For decades, Maryland has had a place on its books for a state song that has been frequently criticized for being a Civil War-era call-to-arms for the Confederacy, from its opening line referring to Abraham Lincoln as a “despot” to its scorn for “Northern scum!”

Now, the song, “Maryland, My Maryland,” is poised to be swept into the dustbin of history, with the governor poised to sign a bill repealing its cherished status after state lawmakers approved the change.

Lawmakers have not chosen a replacement for the song, the singing of which had been tradition at the Preakness Stakes, the second leg of horse racing’s Triple Crown, for more than a century until it was removed from the program in 2020.

On Monday, the Maryland House of Delegates voted 95 to 38 to strip the song of its designation, sending the measure to Gov. Larry Hogan, a Republican, who has said he was open to signing the repeal. Earlier this month, the Maryland Senate voted 45 to 0 to repeal the song.

Previous attempts over the decades to abandon the state song, which was adopted in 1939, had been thwarted by the Legislature. The effort regained momentum after George Floyd was killed last year while in police custody in Minneapolis, which served as a catalyst for a nationwide reckoning on symbols of the Old South and slavery.

“This has stained the pages of our law for too long,” Delegate Sheree Sample-Hughes, a Democrat and the speaker pro tempore of the House, said this month.

Critics of the repeal have said it was another example of cancel culture. An amendment to substitute “The Star-Spangled Banner,” which was inspired by the British attack at Fort McHenry in Baltimore during the War of 1812 and was written by Francis Scott Key, a Maryland native, failed.

The lyrics of “Maryland, My Maryland” are from a poem written in 1861 by James Ryder Randall, a Confederate sympathizer, and the song is set to the tune of “O, Tannenbaum,” according to the state song page on Maryland’s official state website. Randall had been outraged by Union troops marching through Baltimore. Maryland was a border state at the time. 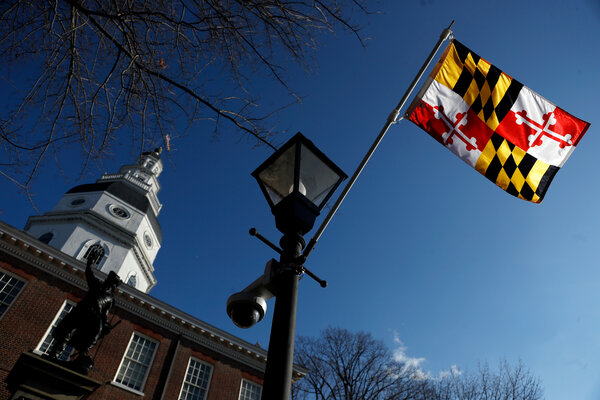 The song’s opening line, “The despot’s heel is on thy shore,” made reference to Lincoln, though not by name. The first stanza delivered a call to arms for the Confederacy.

“Avenge the patriotic gore,” it said, “That flecked the streets of Baltimore.”

Mr. Hogan’s office did not say on Monday when the governor would sign the repeal. When asked if Mr. Hogan supported the measure, a spokesman pointed to comments attributed to the governor last week by The Washington Post.

“I don’t see any problem with it,” Mr. Hogan said, referring to the repeal. “And I never liked the song in the first place.”

When Mr. Hogan was sworn in to his first term in 2015, a choral group from Bowie State University, a historically Black college, omitted the song’s lines that referred to secession, The Baltimore Sun reported.

In 2017, the University of Maryland’s marching band announced that it would no longer play the song at events.

The song has also drawn criticism because John Wilkes Booth might have used similar language as some of the song’s lyrics before he assassinated Lincoln. He was alleged to have shouted the Latin phrase “sic semper tyrannis,” which means “thus always to tyrants” at Ford’s Theatre. The phrase has also been associated with white supremacists. The song’s lyrics use the words “sic semper” and “tyrant’s chain.”