When Marylin Bender was the Sunday business editor of The New York Times in the 1970s, she was one of only a handful of women with any editing clout in the newsroom. Hers was “hardly an elevated post,” she said later in an oral history, but as the boss of her section, she was outraged to learn that her male deputy was making more money than she was.

Outraged, but not surprised. This was still an era when few women could be found in the Times’s cigar-smoke-laden newsroom, when there were no female photographers or national correspondents, and when, in asking for a raise, Ms. Bender was told: “You’re married. You don’t need it.”

The atmosphere prompted some women at the Times to bring a sex discrimination suit against the paper in 1974. Though Ms. Bender was not part of the suit, she was deposed for it.

“I was the one example they had of someone in a slightly elevated, managerial capacity who was proportionately being dealt as much of a shiv as the women plaintiffs,” she said.

Still, Ms. Bender enjoyed a long career as a reporter and editor, most of it at The Times, and as the author of four books.

She died at 95 on Oct. 19 at her home in Manhattan. Her son, James Altschul, said the cause was complications of dementia.

Like many women of that era in newspaper journalism, Ms. Bender started at The Times on the fashion pages, covering the fashion industry for 11 years by looking at it through a sociological lens. As an extension of her reporting, she wrote the 1967 book “The Beautiful People,” which critiqued a growing celebrity culture and examined the symbiotic relationship between fashion and society at a time when people were becoming famous for being famous. 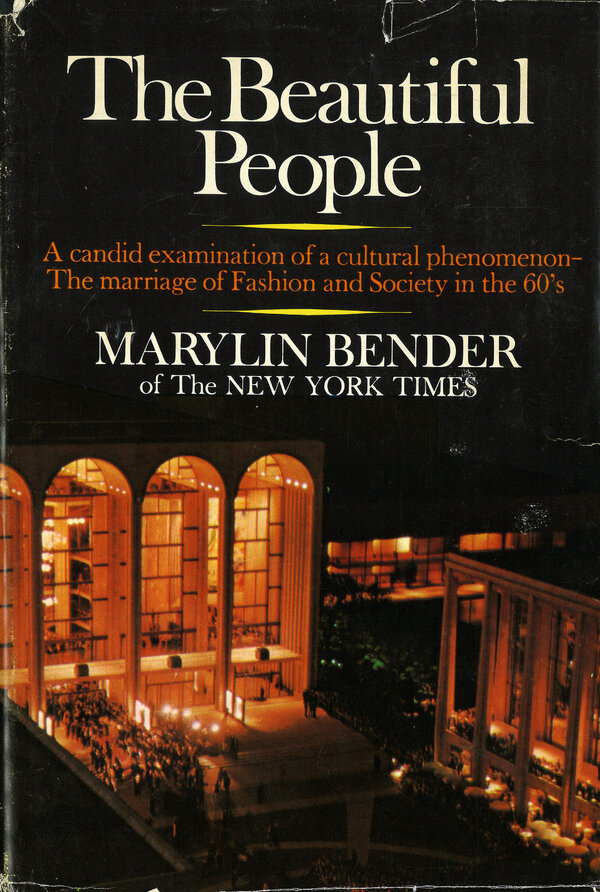 “Miss Bender knows the scene and writes with caustic good humor,” Eliot Fremont-Smith wrote in reviewing her book for The Times.

She was then recruited by The Times’s business news section, where the editors thought her ability to write about a subject through the personalities involved would enliven their otherwise dry pages.

Having earned a law degree and married a financial consultant to the aviation industry, Ms. Bender said, she felt confident in writing about businesspeople. During the oral history interview, conducted in 2000 and 2001 for Columbia Law School, she was asked about her approach to someone like Jack Welch, the heralded chief executive of General Electric who died in March.

“From a business standpoint, of course you’d want to know how he runs his business,” she said. “But the rest of him? It’s hysterical, because he otherwise is not fascinating — unless you dig deeply into his ordinariness.”

Among her subjects was a 37-year-old Donald J. Trump. In a Sunday business section cover story in 1983 under the headline “The Empire and Ego of Donald Trump,” she examined his wheeling and dealing as he expanded his real estate empire across Manhattan.

This “brash Adonis from the outer boroughs,” Ms. Bender wrote, “exhibited a flair for self-promotion, grandiose schemes and, perhaps not surprisingly, for provoking fury along the way.”

He wore “maroon suits and matching loafers,” she added, and won tax abatements and other concessions that critics called “outrageous.”

“You put me down because I’m from Queens,” he told her, according to Soma Golden Behr, who edited the story on the Times’s business desk and went on to become the paper’s first female national editor.

“Marylin had deep knowledge of business and a sharp eye for detail, and she was comfortable writing about the city’s financial class,” Ms. Behr said in a phone interview. “She had insight, and she had chutzpah.”

Marylin Sloan Bender was born in Brooklyn on April 25, 1925. Her parents, Michael and Janet (Sloan) Bender, owned and ran a clothing manufacturing business in Manhattan. They later owned a clothing store, with a branch in Greenwich, Conn. — work that exposed their daughter to the fashion business.

She grew up in Brooklyn and Manhattan and went to Smith College at 15, having skipped a few grades. She graduated in 1944 with a major in history. At Columbia Law School, she said, her classes in evidence gave her good training to be a reporter and steered her to rely on documents. She graduated in 1947.

She married Selig Altschul, a financial expert and counselor to the aviation industry, in 1959. He and Ms. Bender co-wrote “The Chosen Instrument,” a 1982 biography of Juan Trippe, the founder of Pan American World Airways.

Mr. Altschul died in 1992. In addition to her son, Ms. Bender is survived by two granddaughters.

Her first newspaper job was as an editorial assistant at the Hearst-owned New York Journal-American, “a paper for which I had the greatest contempt,” she said in the oral history, “but a job is a job.”

There, she learned how to be a cunning and creative reporter. One of her first assignments, she said, involved going to Queens to asking a woman “how she felt about her daughter having been chopped up and dumped, her body found in pieces, in a garbage pail.”

In time, she helped break open a Salk vaccine smuggling ring. Using a ruse to get a visa, she visited Russia at the height of the Cold War and wrote a series about women’s lives there. She also wrote about alcoholism and aging.

But for the most part she called in her stories from a phone booth to a rewrite desk in the finest “His Girl Friday” tradition. It taught her to think quickly on her feet but had little to do with writing.

“It was the ability to get people to talk that was important, to get information,” she said. “Get the story.”

She landed a job at The Times in 1959. On the fashion page, she worked mostly with women, but once she moved to business news in 1970 and became the first woman to head the Sunday section a few years later, friction with the men there became apparent.

“As Sunday business editor, I believe I did exercise control over the editorial matter, but on the personal level it was a struggle,” she said. “The deputies wanted my job. They weren’t used to taking direction from women, and they were deeply resentful.”

When she left to write a book, her job was given to a man who, she said, “knew nothing about business.” Three months later she was asked to come back and help him. He was making more money than she had. She declined the offer.

But she did support the seven women plaintiffs, led by Betsy Wade Boylan, chief of the foreign copy desk, in their sex-discrimination suit against The Times. Eventually the case evolved into a class-action suit on behalf of almost 600 women. “My deposition was useful,” Ms. Bender said.

Just as a trial was set to start in 1978, The New York Times Company settled out of court, announcing a cash settlement and an affirmative action program under court decree for four years.

Today, women make up 49 percent of the newsroom staff and 46 percent of its leadership. Companywide, they make up 51 percent of leadership positions.