Nine students will sit at desks six feet apart in classrooms that used to hold 30 children. Gyms, cafeterias and auditoriums will be largely off-limits. And, if all goes according to plan, students and staff will not see each other in-person without their masks on for many months to come.

When hundreds of thousands of children in the nation’s largest school system stream back into school buildings this week for the first time since March 13, they will find their schools and classrooms transformed.

New York City is the only major school district in America restarting in-person classes this month, and that herculean task has not unfolded entirely as planned. Mayor Bill de Blasio has twice delayed the start of in-person classes for most students. And on Sunday, the union representing the city’s principals called on the state to take over the reopening effort from Mr. de Blasio.

Under the latest reopening plan, some young children and students with advanced disabilities returned to schools last week, and classrooms will be open for the rest of the system this week.

Here’s what the city’s schools looked like in the weeks leading up to the reopening, as principals and teachers scrambled to prepare for a school year unlike any other.

A classroom can be anywhere 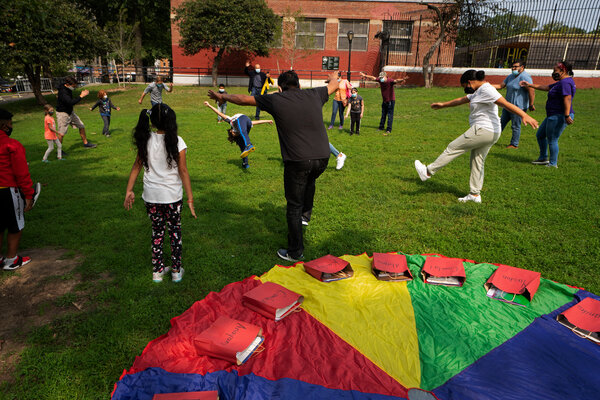 When it comes to the youngest students, “We’re all about the hugs, the sitting together, rolling around on the floor together, that can’t happen now,” said Julie Zuckerman, the principal of Public School 513 in Washington Heights.

Ms. Zuckerman has been thinking of ways to recreate some of that spontaneity. Earlier this month, before the start of in-person classes, her students and their parents gathered in a park near the school to play games and get to know their teachers.

Other schools are making use of outdoor space, from playgrounds to adjoining streets and sidewalks. At SAR Academy, a private Jewish school in the Bronx, morning prayers are held in the schoolyard, with painted circles marking where each child should sit.

SAR was the very first school in New York City to close in March as the virus spread, and it is now one of the first batch of schools that has reopened for in-person learning in September.

Many of New York’s roughly 1,400 school buildings are about a century old, and the city has had to scramble to upgrade ventilation in buildings already in urgent need of repair. In some cases, that has meant prying open windows that have been shut for years. In other buildings, more involved repairs have been made, and some classrooms have been deemed unsafe and will not reopen at all.

Michael Perlberg, the principal of Middle School 839 in Brooklyn, said he had spent hours learning the intricacies of his building’s ventilation system.

“There are four to five hours of my day when I’m dealing with things I never thought I’d be dealing with,” he said.

Mr. Perlberg’s entire staff did a dress rehearsal of the first day of school earlier this month, before they learned that in-person classes would be further delayed. Teachers stood on decals marking where students would stand and cycled in and out of classrooms while keeping six feet of distance.

After city schools were left with little personal protective gear and hand sanitizer in the spring, when the virus was spreading largely undetected throughout the city, Mr. de Blasio promised that schools would have sufficient cleaning supplies, masks and other materials when they reopened. But some teachers have said that the personal protective gear they’ve received will only last a few weeks.

Whether children return to classrooms or take their classes exclusively online, learning will look radically different for all of New York City’s 1.1 million students this fall.