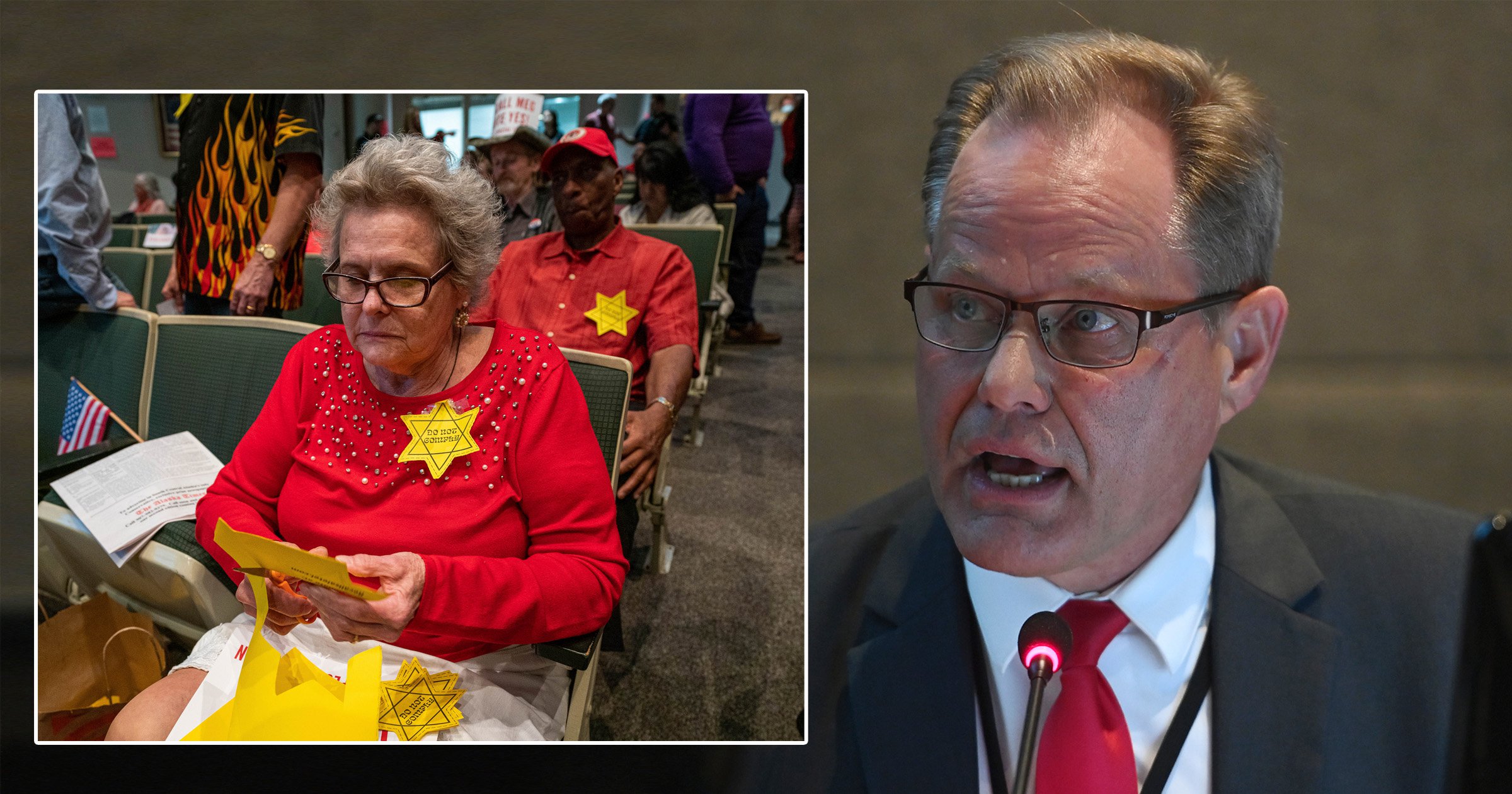 The mayor of Alaska’s largest city has apologized for defending some residents’ use of Holocaust imagery to equate a proposed mask mandate to the oppression endured by Jewish people in Nazi Germany.

Anchorage Mayor Dave Bronson strongly opposes a proposed citywide mask mandate – so much so that he defended the use of yellow Stars of David worn by other critics during a heated public hearing this week.

The proposal before the Anchorage Assembly would require people to wear masks in indoor public spaces and outdoors at large events. The yellow Star of David was utilized by Nazi authorities during the Holocaust to segregate, humiliate and control Jews.

Over 6million people died in the Holocaust.

Bronson could veto the proposal, though the Anchorage Assembly could override him.

If approved, the ruling would require businesses and building owners to deny entry to people without masks, with exceptions for small children and some others.

The contentious debate comes as Alaska experiences a serious spike in coronavirus cases.

Over the last week, the state has seen a 42% increase in new Covid-19 cases, officials said.

The state’s largest hospital has declared crisis standards, which allow the facility to modify its normal levels of care to stay afloat amid the onslaught of incoming coronavirus patients.

Anchorage instituted mask mandates under two different mayoral administrations, but Bronson was elected in May after vowing not to enact mask mandates.

The mayor, during a Tuesday assembly meeting, called the proposed mask mandate ‘reckless and ill-conceived’.

‘But most of all, I oppose this ordinance because it pits neighbor against neighbor, shop owner against customer and friend against friend.’

The next day, he defended the use of the yellow stars during a hearing. Some attendees donning the stars had the words ‘do not comply’ written on them.

Christine Hill, who ran twice unsuccessfully for the city’s assembly, printed out the stars at home and handed them out for others to wear to draw a comparison to the oppression and genocide of Jewish people in Nazi Germany.

Assembly member Forrest Dunbar, who is Jewish and lost to Bronson in the mayoral race, decried the use of the Star of David. Dunbar read a letter he recieved from his rabbi, Abram Goodstein.

‘For myself and most Jews, seeing the yellow Star of David on someone’s chest elicits the same feeling as seeing a swastika on a flag or the SS insignia on a uniform,’ the letter reads.

‘I believe it is a constitutional right to protest for your values. But I request that you do not use symbols that diminish the 6million Jews who were murdered during the Holocaust.’

Bronson defended himself on Wednesday, saying: ‘There was a formal message that came out within Jewish culture about that, and the message was, “Never Again”. That’s an ethos. And that’s what that star really means is, ‘We will not forget, this will never happen again.”‘

‘I think us borrowing that from them, is actually a credit to them,’ the mayor said at the time.

But on Thursday, he back peddled on his previous remarks, saying he should have ‘chosen his words more carefully’.

At Thursday’s hearing, many in the crowd testified against the mask mandate. Others expressed their support for the proposal, citing rising case numbers and overburdened hospitals.

The hearing was scheduled to continue Thursday. Bronson could issue a veto on the proposal, but the assembly has the authority to override it.