[Want to get New York Today by email? Here's the sign-up.]

It’s Thursday. ⚾️ Baseball season begins today. The Yankees’ home opener is against the Baltimore Orioles. The Mets play the Nationals in Washington.

Weather: Early in the day, the wind chill will make it feel as if we’re in the 30s, but it’ll probably reach the mid-50s. 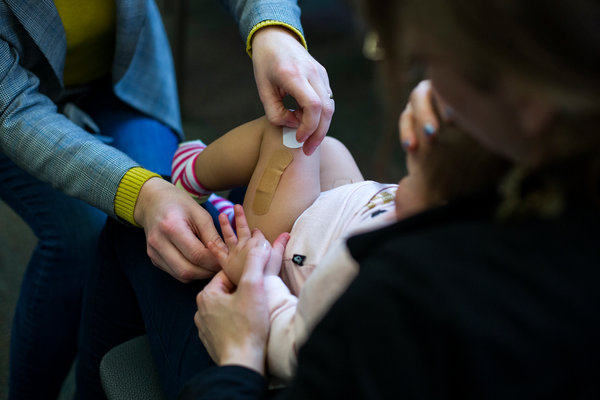 A severe measles outbreak has been plaguing New York since October, with hundreds of confirmed cases both in the city and suburban Rockland County, prompting officials to spring into action.

New York City issued an emergency order in December, demanding that some schools prohibit students who were not vaccinated against measles from attending classes.

And in an extraordinary step, Rockland County on Tuesday barred unvaccinated children from public places for 30 days.

In 2018, New York and New Jersey accounted for more than half of the measles cases in the country. Nearly two decades ago, the United States had gone more than a year without any “continuous disease transmission.”

Here’s what you need to know about measles in New York today.

There have been 214 confirmed cases of measles in Brooklyn and Queens since October, according to the city’s health department.

In Williamsburg, 161 cases have been confirmed; in Borough Park, there have been 47. The remaining cases have been in the Brooklyn neighborhoods of Midwood, Marine Park, Bensonhurst and Brighton Beach, and in Flushing, Queens.

The county, which is north of New York City and has a population of more than 300,000, has had 155 confirmed cases since October, according to its Health Department.

Are these cases linked?

The outbreak in both places has mostly affected ultra-Orthodox Jewish communities and is associated with travelers who brought back measles from Israel, where the disease is spreading.

What exactly is measles?

Measles is among the most contagious of the infectious diseases. It killed 110,000 people globally in 2017, mostly children younger than 5.

In some cases, measles can lead to pneumonia, permanent deafness and brain damage.

What are the symptoms?

People may show no symptoms up to two weeks after being infected.

At first, the signs of measles can appear benign — a moderate fever, cough, sore throat or runny nose. Later, a fever may reach 104 or 105 degrees, and the telltale red dots can appear on the skin.

How is measles spread?

Measles is transmitted by droplets from an infected person’s nose or mouth. The virus can live in the airspace where the person has breathed, coughed or sneezed.

According to the Centers for Disease Control and Prevention, someone who is not vaccinated “can catch measles just by being in a room where a person with measles has been, up to two hours after that person is gone.”

How safe and effective is the measles vaccine?

The measles-mumps-rubella vaccine is extremely safe and effective. The vast majority of people who contract measles have not been vaccinated.

It does not cause autism.

If I choose not to vaccinate my child, why should anyone else care?

An unvaccinated child can get the virus and spread it to those who can’t protect themselves. Infants and people with compromised immune systems cannot get vaccines.

Why is this a problem now?

Vaccination rates are down worldwide. Public health officials are fighting back, repeatedly pointing out that medical and scientific evidence confirms that vaccines are safe. Still, dangerous misinformation is proliferating.

“This feels like a very real-world manifestation of what can happen when you’re in an echo chamber,” said The Times’s Michael Gold, who has reported on the recent outbreak.

[Here’s more on what you need to know about measles, including where else in the country it has spread.]

Photo of the day

It’s Opening Day, and 50 years ago the Mets started their improbable run to the World Series championship. Here was a group of players who had stumbled all over the place in 1962, with fans who embraced them almost in defiance. A team that slowly improved in the years that followed, and figured it all out for one intensely memorable season.

A secretive dinner where $25,000 buys access to Governor Cuomo (and filet mignon).

Why the plan to legalize marijuana in New Jersey suddenly unraveled.

Subway bathrooms: Are they as bad as you think?

“They’re leaving us with nothing.” The cutting of 150 teachers threatens a troubled New Jersey city.

Scanning 900 pages of Michael Cohen documents in fewer than 10 minutes: How two Times reporters sped through them.

[Want more news from New York and around the region? Check out our full coverage.]

A Brooklyn councilman is facing criticism for writing “Palestine does not exist” in a tweet directed at a local reporter. [Brooklyn Daily Eagle]

A young man from the Bronx — whom we’ve told you about — is changing the face of birding. [WNYC]

The executive producer of HBO’s “Veep” wants Alec Baldwin for New York City mayor and the “ghost of Mario Cuomo” for president. [Politico]

The city filed a lawsuit against Ballyhoo Media, the company behind those floating billboards. [Gothamist]

Hear rare audio recordings of Lou Reed from his archive at the New York Public Library for the Performing Arts in Manhattan. 11 a.m. to 7:30 p.m. [Free]

The Afro-Puerto Rican author Dahlma Llanos-Figueroa celebrates the 10th anniversary of “Daughters of the Stone” with a reading and book signing at the KRVC Development Corporation in the Bronx. 7 p.m. [Free]

Tune into an electronic music performance at the Old Stone House in Brooklyn. 8 p.m. [$10]

March Madness brackets aren’t just for basketball. They’re for pizza slices. The name of the year. And one-liners.

Emily Winter, a writer and comedian from Brooklyn, founded One-Liner Madness, a bracket-style single-elimination joke contest, six years ago, and she is hosting a version tonight in the borough. (She’s hosted more than a dozen of these shows across the country.)

Here’s how it works:

• Sixty-four comedians compete. Two are onstage at a time, and each tells a one-line joke.

• The audience laughs (or boos — this is Brooklyn, after all), and judges decide who advances to the next round.

The contest lasts about 90 minutes, and there are lots of jokes flying around — from the competitors, Ms. Winter and even the musician who performs between rounds.

The sets are short. No context is needed.

“I’ve never thrown a bad one,” Ms. Winter said about the show, adding that it’s usually a hit, even if the one-liners aren’t.

“The people that don’t have the jokes get eliminated right away, and if there’s somebody you don’t like, they won’t be onstage that long.”

Metropolitan Diary: Catcher in the reservoir

They’re lonely and cold and prob’bly depressed,
It’s tough in this town when you haven’t a nest.
When the trees are all bare and the temper’ture’s brutal.
And the mood is despair and the journey is futile.

But kiddo, take heart, because this is the crux:
If you listen for quacking, you’ll see that the ducks
Are here in the park and they haven’t flown far —
They splash and relax in the grand reservoir.

The ducklings, the drakes, the mallards, the hens,
All the ducks in a row, our fine feathered friends.
Dining on sushi, a marvelous feast,
Central Park’s their address: West, Middle and East.

So, hang in there, Holden, everything’s ducky,
Both you and the birds are lovely and lucky.
No need to wonder just where the ducks go,
Look no further than here, and thank Jackie O.