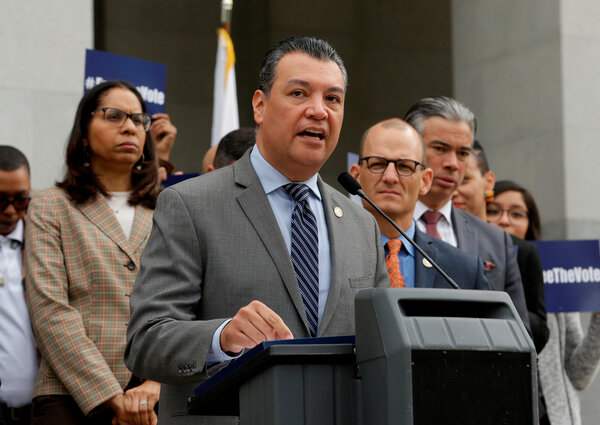 It’s official: California — a state where nearly 40 percent of the population identifies as Latino — will have its first Latino senator.

Alex Padilla, California’s secretary of state, has been appointed to replace Senator Kamala Harris when she becomes vice president.

And Shirley Weber, a State Assembly member, was tapped to replace Mr. Padilla as secretary of state. She’ll be the first Black woman in the role.

For those of you who have been following along, Mr. Padilla’s appointment may not be much of a surprise. A longtime ally of the governor, he quickly emerged as a top contender, along with Attorney General Xavier Becerra, and Representatives Karen Bass and Barbara Lee.

[Read more about the jockeying over the Senate vacancy.]

Ultimately, Mr. Padilla’s ascension drew congratulations from Democratic leaders across the state, including his competitors. And political observers say that both Mr. Padilla and Ms. Weber have important — but difficult — work ahead of them as leaders in a Democratic Party that still doesn’t fully reflect its constituency.

My colleague Shawn Hubler, who’s been covering the state’s game of political musical chairs, and I each caught up with Mr. Padilla recently — Shawn on Tuesday, shortly after the news broke that the governor had offered him the job. I spoke with him earlier this month.

Here are excerpts from our conversations, lightly edited:

SH: Congratulations, Senator. I know it’s been a long process. The Zoom conversation the governor tweeted, of you accepting the appointment, was very moving.

Yes — that excerpt was recorded unbeknownst to me. I was overwhelmed with emotion. There is a lot of work to get to, of course, but I couldn’t help but think of my parents, who came here from Mexico in pursuit of the American dream. All I ever heard as a child was work hard, study hard. And all I ever wanted to do was honor their sacrifices.

To think that the son of a cook and house cleaner will be serving as a U.S. senator is immensely humbling.

SH: How did your dad react?

He was my first call this morning. He was pretty ecstatic. We actually lost my mom a couple of years ago. His first remark was, “Your mom would be so proud.”

SH: You live near your dad in the Valley. Your mother-in-law lives with you and your wife, Angela, and your three children. Will you all be going to Washington?

No, no. Our support network is here. For eight years when I was in the State Senate, I did the back-and-forth to Sacramento. It will be a similar routine. Just a longer flight.

SH: What will be your first order of business?

Covid, Covid, Covid. It has been devastating to so many families, both from a health and economic perspective.

There are big issues at hand, but we can’t fully address them until we get control of this pandemic. American families are going to need more support for many, many months, as will small business. I also hope to continue the work I did as secretary of state on election security and voting rights.

SH: There was intense lobbying by others to appoint someone who was Black, female, progressive, younger or gay. Representatives Karen Bass and Barbara Lee were floated as contenders, as was Mayor Robert Garcia of Long Beach. How can that disappointment be healed?

I’m looking forward to being the best senator I can be for all Californians. I’m proud to come from a background I share with 40 percent of the people in the state. But the way I’ve gone about my work is to build bridges and coalitions of support. That’s going to continue.

JC: You’ve talked before about how you went to college thinking you’d be an engineer. But instead, you got into politics, driven in large part by Proposition 187. Can you tell me more about how that happened?

I was fresh back from the Massachusetts Institute of Technology, ready to embark on a career, thankful for a world-class education, the product of my parents’ struggles and sacrifice, and the message I was getting from Gov. Pete Wilson and the Prop 187 proponents was that California was going downhill and it was the fault of people like my parents.

I was just absolutely enraged and insulted and like a lot of young people, probably cynical about politics and politicians. I never dreamed of running for office or being involved in electoral politics, but I realized that I had no choice, that I had to engage — otherwise our community would continue to be a target.

It’s been a tremendous arc because, you know, 25 years later, I was serving as the chief elections officer for the state of California.

JC: I’m curious about how you think about your work overseeing the system that gave Proposition 187 a venue, especially after what we saw with Proposition 22 this year and the way huge amounts of money can shape those initiatives.

There’s two ways to look at it, right? There’s the process and the content.

Let’s look at the content: Today, people view California as the land of the resistance. That wasn’t the case just 25 years ago. People say: “The bad news about Prop. 187 is that it passed. The good news is that it never went into effect.” It was deemed unconstitutional.

The single biggest reason that California is different today than the era that produced Proposition 187 is because the Latino community and other immigrant communities chose to engage. You had a whole generation of people that chose to to try to make a difference.

And you had at least hundreds of thousands, if not a couple of million, people like my parents, who, up until that point had legal permanent residence for nearly 30 years with no urgency of becoming citizens. And that changed immediately after Prop. 187 began.

They became citizens not just to protect themselves, if you will, but specifically so that they could register to vote.

Just hours after the governor announced his long-anticipated pick to replace Ms. Harris, he announced he’d also asked Dr. Weber to take over for Mr. Padilla as the state’s top elections officer.

Mr. Newsom, in a statement, described her as “a tireless advocate and change agent with unimpeachable integrity,” who has worked to expand voting rights.

“Becoming the first African American Woman in this position will be monumental, and I am up for the challenge,” Dr. Weber said in a statement on Twitter. “Being at the center of voting rights and laws that govern this state is a motivating factor in the work I will continue to do.”

As Shawn reported last week, Dr. Weber’s father, a sharecropper in Arkansas who fled racist violence to California, didn’t get a chance to vote until well into his 30s. But once the family was settled in Los Angeles, their living room served as a polling place.

“We knew as kids how important it was to vote, and how significant it was that my dad and mom were denied the right to vote,” Dr. Weber said.

And now, Mr. Newsom has one choice left to round out his historic reshaping of the state’s leadership: He hasn’t chosen a successor to Attorney General Xavier Becerra, who is President-elect Joseph R. Biden Jr.’s choice to lead the Department of Health and Human Services.

When Shawn talked to Mr. Padilla just before Thanksgiving, he was making pumpkin chili for his family. Now, we have the recipe, from California’s newest senator himself, below:

In a slow cooker, place the following ingredients and let cook for at least 4 hours:

*Feel free to try different meats. I’ve made this recipe with chicken, ground beef and even shredded turkey.

** You can use any kind of beans, really. I’ve used spiced black beans, pinto beans, cannellini beans, great northern white beans. You can use two cans of the same kind of beans, but I like to use different beans to vary the flavor.

(And while you’re here, don’t forget about Cooking.)