WASHINGTON — Judge Merrick B. Garland always made a point of wearing a coat and tie when he surveyed the wreckage at the site of the 1995 Oklahoma City bombing, the worst domestic terrorist attack in American history.

He had been dispatched from Washington to oversee the case for the Justice Department, and he told colleagues that he viewed his daily uniform as a gesture of respect for a community left devastated after Timothy J. McVeigh placed a 7,000-pound bomb in a Ryder truck and blew up the Alfred P. Murrah Federal Building, killing 168 people, including 19 children.

“It really looked like a war zone,” Judge Garland said in recalling the destroyed and still-smoldering building, part of an oral history he participated in for the Oklahoma City National Memorial and Museum. “The site was lit up like a sun, like the middle of the day.” The worst part, he said, was seeing the demolished day care center. “There was nothing there,” he said. “It was just a big empty concave.” His own daughters were 4 and 2 at the time.

The Oklahoma City case, he later said, was “the most important thing I have ever done in my life.” 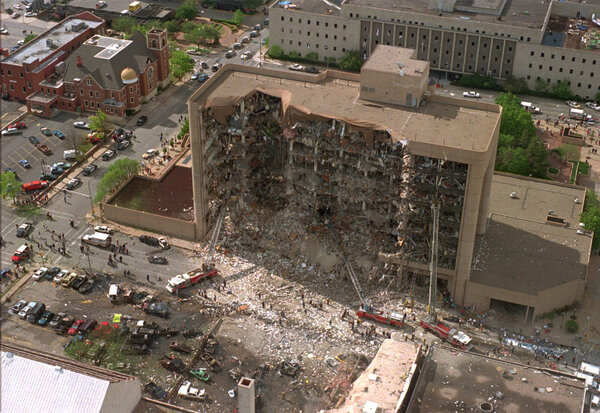 When President Biden nominated Judge Garland last month to be attorney general, the news conjured up his ordeal in 2016 as President Barack Obama’s thwarted nominee to the Supreme Court. But Judge Garland’s experience prosecuting domestic terrorism cases in the 1990s was the formative work of his career, from the nuances of federal statutes down to the feeling of broken glass crunching beneath his dress shoes.

The man has now met the moment. At his Senate confirmation hearings starting on Monday, he will almost certainly be asked about the Department of Homeland Security’s warning that the United States faces a growing threat from “violent domestic extremists” and that the Jan. 6 mob attack on the Capitol may not have been an isolated episode. In a strange, or perhaps fateful, turn of events, the news leaked that Judge Garland was Mr. Biden’s pick for attorney general only hours before the deadly riot. Mr. Biden formally nominated him for the position the next day.

“He has seen this hatred up close and in a very personal way,” said Donna Bucella, a former Justice Department investigator who worked with Judge Garland in Oklahoma City. In the oral history, Judge Garland recalled the “stone cold” demeanor of Mr. McVeigh and his chilling absence of emotion. “There was just no indication from him that he had any feelings about what had just happened,” Judge Garland said.

Judge Garland has been a Court of Appeals judge for the District of Columbia Circuit since 1997, and in Washington, he is known as a centrist whose congenial manner places him stylistically at odds with an era that might require more prosecutorial zeal. But friends said no one should mistake his gentleness for softness, and point out that he was part of the Justice Department team that sought the death penalty for Mr. McVeigh, who was executed by lethal injection in Terre Haute, Ind., in 2001.

In addition to Oklahoma City, Judge Garland supervised high-profile cases that included Theodore J. Kaczynski (a.k.a. the Unabomber) and the bombing at the Atlanta Olympics in 1996. “The militias and the right-wing terrorists whom we encountered in the 1990s were a foreshadowing of the groups you saw storming the Capitol,” said Jamie Gorelick, who as deputy attorney general under President Bill Clinton was Judge Garland’s immediate boss at the Justice Department. “Their literature is the same, their tattoos are similar, and their language is similar.”

Judge Garland will take over what prosecutors are calling the biggest, most complex investigation in Justice Department history, the Capitol assault that led to the second impeachment of President Donald J. Trump. So far there have been at least 230 arrests connected to the riot, but federal officials are investigating as many as 500 people in all. Prosecutors have brought five major cases involving 11 members of the Proud Boys, a far-right nationalist group that was out in force at the Capitol. Nine members of the Oath Keepers militia group have been charged with conspiring to stop the congressional certification of Mr. Biden’s victory.

“There’s an undercurrent in this country that has waxed and waned over the decades with people who do not believe in the federal government,” said Michael Chertoff, a former Justice Department official who served as the secretary of homeland security under President George W. Bush. Mr. Chertoff called the nature of today’s threat “strikingly similar” to what Judge Garland confronted, but also distinct. Guns and other weaponry have grown in abundance and sophistication. Social media has allowed for terrorist networks to communicate and expand rapidly.

The scope of these law enforcement challenges are only part of what associates said would await Judge Garland at a Justice Department left battered, divided and demoralized under Attorney General William P. Barr. He will also inherit a docket of politically charged matters, including possible criminal inquiries into the conduct of the former president as well as an open investigation into the tax affairs of the current president’s son, Hunter Biden.

“He knows how hard this is going to be,” said Senator Michael Bennet, Democrat of Colorado and a former colleague at the Justice Department.

The Job He Was Denied

People who have worked closely with Judge Garland say there was no better demonstration of his mettle than the time he spent in Oklahoma City after the bombing. On a late April day, he watched the calamity unfold on television from his fourth-floor office at the Justice Department, and his immediate association, he said, was the bombing of the U.S. Marine barracks in Beirut 12 years earlier — “a similar kind of concrete building and pancaked down in the front.”

Within 48 hours, Judge Garland was in Oklahoma City, where he went directly to Mr. McVeigh’s arraignment and that night toured the obliterated federal building. He worked out of a command post set up in a Southwestern Bell Telephone Company building a few blocks away — close enough to the site to have had its windows blown out. The Salvation Army set up a chow line on the first floor. He consumed a vast array of the city’s finest fast food and bunked at an Embassy Suites over the next several weeks.

“Once you’re there, you just do not want to leave,” Judge Garland said in the oral history. “We all wanted to be there all the time. None of us wanted to miss any lead.” He declined to be interviewed for this article.

Officials who dealt with Judge Garland in Oklahoma City said he brought humanity to what was a stressful and at times contentious environment. “Usually with prosecutors who are dealing with heartbreak and horror, there’s a temptation to step away and put all the emotions off to the side,” said Frank Keating, the Republican governor of Oklahoma at the time. “That was never true with Merrick Garland.”

For weeks afterward, Judge Garland carried in his briefcase a program from a memorial service that bore the names of the victims.

In more recent years Judge Garland has come to occupy a peculiar place in Washington life: someone best known for the job he was denied. Mr. Obama nominated Judge Garland to the Supreme Court in March 2016, praising him as a moderate and nonpolitical judge. The choice was partly a calculus to appeal to Republicans, since Judge Garland had a record of often siding with law enforcement in his criminal rulings. He had only tepid support from the liberal wing of his party, particularly Senator Bernie Sanders, who said in his primary campaign for president that year that if he won the White House, he would ask Mr. Obama to withdraw the nomination.

Senator Mitch McConnell, Republican of Kentucky and the majority leader, held up Judge Garland’s nomination a full eight months before the election for the stated reason that the next president should decide, which Mr. Trump did. Mr. McConnell later called the maneuver “one of my proudest moments.”

Stung and deflated, Judge Garland returned to his appeals court seat resigned to his quirky place in history. Strangers would approach him to offer condolence, as if this figure of unrivaled achievement would be marked forever by this singular disappointment.

But fate once again intervened. “So as we stand here today, we do so in the wake of yesterday’s events, events that could not more have vividly demonstrated some of the most important work we have to do in this nation,” Mr. Biden said on Jan. 7 in announcing Judge Garland’s nomination to the court. There was “no more important place for us to do this work than the Department of Justice that has been so politicized,” Mr. Biden added, then lauded Judge Garland as “a federal prosecutor who took on terrorism and corruption and violent crime, always with the utmost professionalism and the duty to the oath he swore.”