REYNOSA, Mexico — As the human smugglers stalk the bus stations, migrant shelters and twisting streets of this Mexican border town, they have no trouble collecting clients like Julian Escobar Moreno.

The Honduran migrant arrived in Reynosa, Mexico, intending to apply for asylum in the United States. But new policies north of the border have instead driven him into the hands of the city’s smuggling cartels, whose business is booming.

“I honestly don’t want to cross illegally, but I don’t really have a choice,” said Mr. Moreno, 37.

The Trump administration, which has partially shut down the federal government in a fight over funding for an enhanced border wall, has adopted a number of strategies over the last two years to deter migrants and persuade them to turn around — or not to come at all. 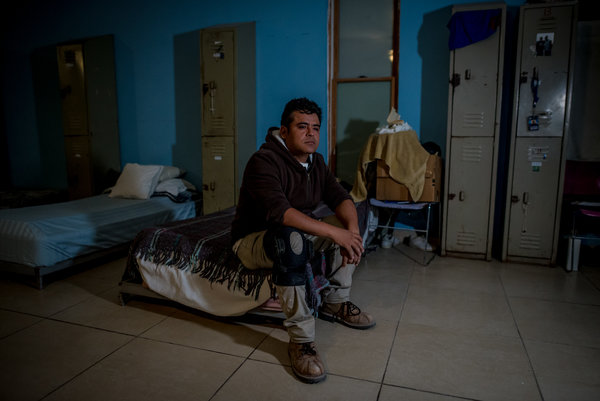 Its latest effort is a policy that admits only a few asylum seekers a day, if that, at border crossings. As a result of this metering, migrants are now waiting on the Mexican side of the border for weeks and months before they can submit their applications.

In Reynosa and elsewhere, the delays caused by the policy are prompting many migrants to weigh the costs and dangers of a faster option: hiring a smuggler, at an increasingly costly rate, to sneak them into the United States.

In November, the number of migrant families apprehended attempting to cross the border skyrocketed to its highest levels on record, with some of those caught having turned to smugglers at some point in their trip.

“What we have seen is that no one is getting across the border,” said Hector Silva, the director of a center providing services to migrants that sits near the banks of the Rio Grande, which separates Reynosa from McAllen, Tex. “This forces families, with all the desperation they feel, to go illegally.”

The decision to endure a long wait or illegally expedite the journey to the United States is playing out not only in Reynosa, where the crack of gunfire has become a soundtrack of the city, but across the long sweep of the United States-Mexico border, all the way to Tijuana, where a crisis is unfolding as thousands of Central Americans wait their turn to cross the border.

A visit to a Reynosa migrant shelter quickly makes it clear how many are considering the smuggling option.

“I’m scared to go to the border crossing, because they will deport me,” said Maximo Rene Arana Nunez, a Guatemalan who arrived in Reynosa a few days ago and is looking to cross. “I’m stuck here until my family in the United States can save enough money to pay for a smuggler.”

According to those recently deported, migrants who are attempting to cross and local officials, the price that smugglers can command is rising along with the demand for their services.

For those able to afford it, and willing to accept the risk, finding smugglers in Reynosa is easy. The streets seethe with smuggling cartel agents, who openly pitch their services.

The dangers of an illegal crossing are not enough to dissuade migrants. They are fearful, but many feel they have no other recourse. For many, the calculation is predicated on a simple truth: What lies behind them is worse than what may lie ahead.

“I don’t have an option, I can’t be there,” Mr. Moreno said of his native Honduras. “Our government is totally corrupt, and if the Mexicans or Americans deport me, I’m dead.”

Mr. Moreno now works 12-hour shifts on the outskirts of the city, trying to save enough to pay for a smuggler.

For other migrants in the shelter, the equation was not necessarily of life or death, but of exchanging well-known hardship for vaguer hope.

“Look, we know what the situation is in our country,” said Osman Noe Guillén, 28, who reached Reynosa with his partner shortly after their marriage, having treated the ride on the buses up from Honduras as something of a honeymoon. “We don’t know what will happen when we cross.”

Mr. Guillén gripped the hand of his wife, Lilian Marlene Menéndez, and allowed himself a smile. Blind faith and economic need were enough for them. They did not know how grim and dangerous Reynosa was before they arrived, only that it was the closest crossing from Honduras and therefore the cheapest to reach.

Yes, they had heard the angry rhetoric migrants coming out of the United States, they said, and knew about the deportations and long waits at the border. But they didn’t care.

“Desperation makes you do crazy things,” Mr. Guillén said. “I don’t think anything would stop me. And certainly not a wall.”

The couple, having priced out the next leg the journey with local smugglers, said they have accepted the risks of continuing. The smugglers, or polleros, are known to kill or strand migrants who falter in their payments, and to extort those who have families that can mortgage homes or drum up more money.

In recent days, the couple was quoted a price of $7,000 apiece just to make it to the banks on the Texas side of the river.

That appears to be on the higher end; many Central Americans recently have been quoted $5,500 to be ferried to reach the other side of the river. Not long ago, $4,000 was the going rate.

Some of the migrants interviewed who were planning to try the smuggling route said they still intended to apply for asylum if and when they made it to the United States.

While the United States’ revised policy toward asylum seekers is primarily aimed at dissuading Central American migrants from making the trip to the border, it is also affecting Mexican policy and the lives of Mexicans in border cities.

The mayor of Reynosa, Maki Esther Ortiz Dominguez, noted that her city, in the state of Tamaulipas, was already one of the most dangerous in Mexico. She said she is worried the situation in Reynosa could grow even worse, as migrants are either preyed upon by criminals or recruited to join their ranks.

“This policy could at any moment detonate a new crime wave here,” Ms. Ortiz Dominguez said.

In the center of the bridge that connects Reynosa with McAllen, the United States Border Patrol this summer constructed a new booth for prescreening people hoping to make it into American territory. At least two officers are on duty in the tiny structure, asking everyone who passes for their documentation.

More recently, Mexican officials have begun acting as a first line of border defense. As people queue up to cross the bridge, Mexican agents are now pulling Central Americans out of the line, demanding their paperwork and detaining them if they have not filled out the proper documentation.

Some have languished for months waiting for family members to send money to pay the fee for the paperwork.

The new approach by Mexican agents at the border was begun under pressure from the United States, said one Mexican official in Reynosa, requesting anonymity because this person was not authorized to discuss the decision publicly.

It was this new approach by the authorities in Mexico that ensnared Mr. Moreno.

Having been run out of Honduras by the notorious 18th Street gang for refusing to work for them, he believed he had a good case for political asylum in the United States and went to the bridge in Reynosa so he could start the application process.

But moments after arriving with his pregnant wife and three children at the foot of the international bridge, he and his family were stopped by Mexican officials and detained.

A few months ago, Mr. Moreno’s lack of proper paperwork would have been ignored by the Mexican authorities, according to local officials and immigration lawyers. But Mr. Moreno was held in a cell for 20 days and his family was placed in a temporary shelter.

The lure of the smugglers in Reynosa is not limited to Central Americans. Mexicans, too, employ their services, although the cost is lower — the prices charged seem to depend on just how bad the situation is in a migrant’s home country.

On a recent day in a migration office in Reynosa, a group of Mexicans sat waiting to be processed after their deportations from the United States.

“For the migration authorities, it is a job,” said Melvin Gómez, 18, who is from the Mexican state of Chiapas. “For Mexicans and Central Americans, immigration is a dream.”

Mr. Gómez had just tried crossing for the fourth time the day before.

“We have something to live for,” he said, “and that keeps us going.”