TIJUANA — Life in Tijuana’s largest migrant shelter has begun to take on the familiar rhythms and sounds of a Central American neighborhood: Early in the morning, adults rise and get ready to go to work. Children dress for school. Mothers gather huge bundles of dirty clothes for the day’s wash. Vendors hawk coffee.

“We are getting used to this life,” said Norma Pérez, 40, who left Honduras in a migrant caravan bound for the United States about two months ago with her 5-year-old son.

For weeks, they walked from Central America up to the Mexican border with the United States, fleeing poverty and violence. All along the way, President Trump described the migrants as a danger, as invaders trying to crash their way into the United States. But they didn’t stop their trek north.

When they arrived at the border, Tijuana was not ready for them. The conditions were deplorable, and the migrants were surprised they would not be able to apply for asylum right away. Twice, groups of migrants approached the border fence and were repelled by border patrol agents using tear gas and pepper spray. 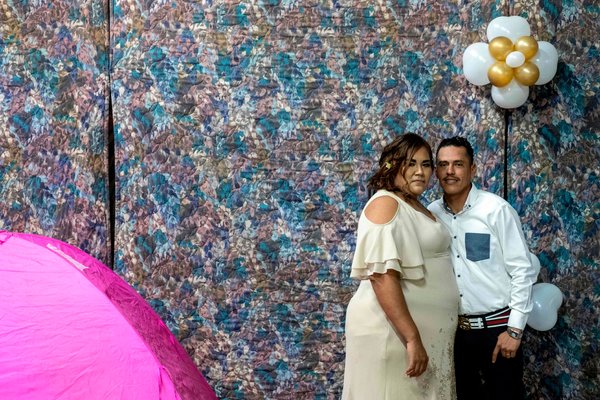 But now, life for many of the new arrivals has settled down.

Mexico’s new president, Andrés Manuel López Obrador, has begun to make good on promises to create alternatives to immigration, and he has already rolled out a plan to increase wages along the United States-Mexico border.

And the migrants themselves have begun to create a sense of community in the shelters here, like the city’s largest, known as El Barretal. They said they have no intention of turning back.

Mr. Trump “should personally go to Honduras so he can see with his own eyes that we simply can’t go back, that there are no jobs, no companies, nothing,” Ms. Pérez said.

So she is settling in at El Barretal, a concert venue turned into a shelter where tents are lined up in orderly rows on the clean concrete floor. For the thousands of migrants like her in El Barretal and 18 other Tijuana shelters, this is home — for now.

As she waits for her chance to apply for asylum in the United States, Ms. Pérez has decided to apply for a temporary humanitarian visa in Mexico. That will let her find a job in Tijuana and support herself and her child for as long as necessary, she said.

Rodolfo Figueroa, an official with the National Immigration Institute, a government agency, said most of the migrants who arrived in Tijuana with the caravan and who applied for humanitarian visas have been approved. In total, 2,200 visas have been awarded in little over a month, he said. About 1,300 migrants have either been deported or voluntarily returned to their home countries, he added.

Early on a typical morning in the El Barretal shelter, migrants who already hold a temporary Mexican visa head to work at a nearby market as meat and poultry vendors. Others make their way to jobs as truck drivers, construction workers or laborers in the city’s electronics manufacturing plants.

The shelter’s manager, Leonardo Nery, said the number of people living there had dropped from 3,000 a month ago to around 1,000 as some migrants found their own living arrangements in town. Others have crossed over to the United States or returned home, he said.

Around 10 a.m., loudspeakers inside El Barretal announced that buses sent by the Mexican federal government had arrived to take anyone interested in Mexican humanitarian visas to an immigration office. The same voice reminded migrants to gather any trash and place it in the available cans.

Around noon on most days, English classes start inside a small white tent with bright blue carpets covering the concrete floor. Puzzle pieces are spread on tables, along with drawings and crayons. Posters with names of colors hang on the walls.

Darwin Bardales, an 18-year-old Honduran, has been working as a volunteer in the shelter’s English school.

“It feels good to do something for the others, especially the kids,” he said. “After all, we are all in the same vulnerable situation.”

The children usually take classes in English and Spanish, learning to read, to color and to eat healthy foods. This Friday, the classes got a late start: The arrival of donated teddy bears and piñatas had the children’s full attention until a female voice boomed from the loudspeaker.

“Hello everybody, it’s your teacher!” the voice said. “It’s time for class, kids!”

Adult migrants scattered around the camp cheered in response.

Food is cooked and distributed both by private aid groups and by Mexican marines twice a day — rice, soup and sandwiches. It is a bare-bones existence, but friendships have developed and at least one wedding took place in a downtown shelter.

Early on Friday, José Daniel Castro, 44, was already busy managing what has become the shelter’s corner shop, where he sells cigarettes, potato candy, soup and other basics around the clock.

Mr. Castro left Honduras in mid-October. Now he buys supplies in Tijuana every morning, and he earns about $20 a day reselling them — enough to buy his own food, he said. Having been deported from the United States three times, he plans to stay in Mexico indefinitely, working as a vendor, he said.

“I can work here and make a little money,” he said. “That is already more than I can say about back home. In the end, all we wanted was to work and help our loved ones back home.”

“We are fighting, and hustling,” said Mr. Pérez, who also scrubs floors in a downtown Tijuana restaurant. “The dream was and is the United States. But it has all become so difficult and dangerous for us that the best thing to do is work while we wait for things to get better.”

Their first few days in Tijuana last November were chaotic, and a bitter disappointment, migrants said. The Trump administration had limited the number of asylum applicants that could be seen in a day, separated parents from their children, sent troops to patrol the frontier — and even, starting last month, shut down the federal government in a bid to get funding for a border wall.

Housed initially in an open-air sports complex, the migrants saw a torrential downpour turn the ground to mud around their makeshift tents. Children started to get sick and adults grew dispirited.

But to many, those hardships felt temporary — and less threatening than the conditions they had left at home. And life at El Barretal is a definite step up from those first, soaking days.

Elisabeth Ponce, 38, was putting the last touches on her makeup before she started her day’s work. She came from Honduras and now has a job inside the shelter, handing out toiletries, medicine and other basic supplies.

She fled Honduras, like so many others, fearing for her life after being threatened by criminal gangs. Joining the caravan was a drastic decision: It meant leaving behind her four children and venturing outside her country for the first time, knowing she had no one to help her if she ever got to the United States.

Now she knows she may never get the asylum she is applying for, and that crossing illegally is dangerous. But she remains resolute.

“I am going to try, regardless,” she said.