The unified command responsible for the United States’ nuclear strike capabilities drew attention on Monday when it tweeted a message and video that threatened the possibility of dropping a bomb.

In the tweet, which was posted as Americans prepared to celebrate New Year’s Eve and was deleted about three hours later, the United States Strategic Command said the nation was “ready to drop something.” A video that was part of the tweet showed a B-2 stealth bomber soaring across the sky before releasing two GPS-guided bombs that exploded into a giant ball of fire after hitting the ground below.

In the video, which was viewed more than 120,000 times, pulsing music beats in the background as the words “STEALTH,” “READY” and “LETHAL” flash across the screen in white block letters.

“#TimesSquare tradition rings in the #NewYear by dropping the big ball…if ever needed, we are #ready to drop something much, much bigger,” the tweet said, adding the hashtags: “#Deterrence #Assurance #CombatReadyForce #PeaceIsOurProfession.” 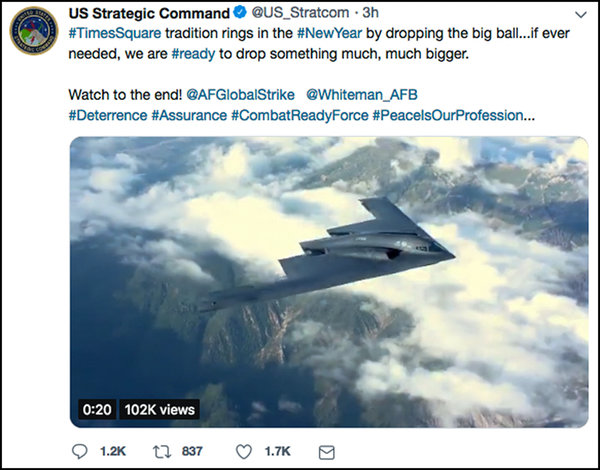 It was quickly derided on social media. Walter M. Shaub Jr., who resigned in 2017 from his position as the head of the Office of Government Ethics, tweeted a screenshot of the deleted Stratcom message, asking: “What kind of maniacs are running this country?” Other critics called it “a sick, bragging joke” and inappropriate and unamusing. The tweet’s defenders argued that any alarm was overblown.

A spokeswoman for the Strategic Command said the post “was part of our Year in Review series meant to feature our command priorities: strategic deterrence, decisive response and combat-ready force.”

“It was a repost from earlier in the year, dropping a pair of conventional Massive Ordnance Penetrators at a test range in the United States,” she said in a statement that did not elaborate.

About 30 minutes after the statement was issued, Stratcom apologized on Twitter, saying that its “previous NYE tweet was in poor taste & does not reflect our values.”

“We are dedicated to the security of America & allies,” the new tweet added.

The video in the original tweet shows a B-2 stealth bomber dropping a GBU-57 Massive Ordnance Penetrator. The GPS-guided bomb weighs tens of thousands of pounds and is designed specifically to penetrate thick concrete that protects entrenched structures such as underground bunkers and weapon storage sites.

Stratcom is one of the American military’s 10 unified commands. While some of those commands oversee operations in a specific region, like the Middle East or Africa, Strategic Command oversees specific capabilities, such as the Air Force’s bomber wings that can strike anywhere in the world, encrypted communications or the tracking of global weapons of mass destruction.

The military’s misstep was not its first on social media in 2018. In May, the Air Force tried to link fierce fighting in Farah, a city in western Afghanistan that was at the time besieged by Taliban militants, to a debate on the internet. The Air Force deleted that tweet and acknowledged that it, too, was in “poor taste.”

A violent storm that has ravaged parts of Spain with heavy rain and violent winds has left at least 13 people dead. Spanish authorities said…

City Councilman Ydanis Rodriguez (D-Washington Hts.) is leading a drive to give the right to vote in municipal elections to non-citizens living legally in the…