Gov. Andrew M. Cuomo announced this week that businesses like indoor fitness studios would be allowed to reopen. 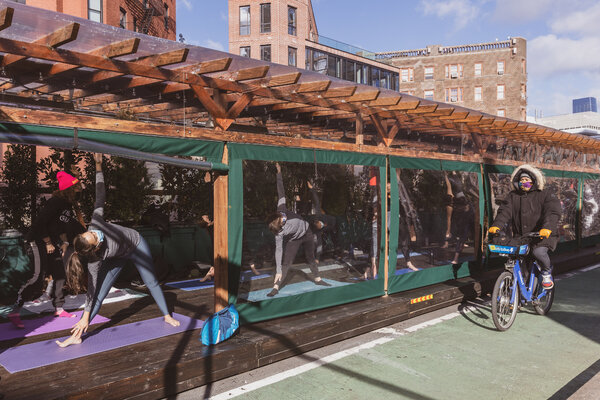 Gov. Andrew M. Cuomo announced recently that New York City would take several more steps toward normalcy: More people would soon be allowed in restaurants; an 11 p.m. curfew at businesses like movie theaters would end; and yoga classes, among other indoor fitness activities, would be allowed to restart.

“Covid’s coming down, vaccine rates are going up,” the governor said at a news conference on Thursday. “Start to look to the future aggressively, and let’s get back to life and living and get that economy running, because it is safe.”

Daily coronavirus cases reported in the city and state appear to have reached a plateau after a post-holiday spike, death rates and hospitalization rates related to the virus are on the decline, and more people are receiving the vaccine.

But not everyone agrees that reopening is safe, partly because the presence of variants that are more contagious, and possibly deadlier, complicate the short-term outlook.

“Our health care team has said very clearly this is not what they would have done,” Mayor Bill de Blasio said on Thursday about the reopening of fitness studios. “The state just doesn’t care.”

So is now a good time to take in a ballgame or break out your dusty yoga mat? Opinions are divided.

The case for reopening

For business owners and state officials, the case is clear: just look at the numbers.