A man hurled a 52-year-old homeless woman onto the New York City subway tracks in broad daylight and fled.

Surveillance footage shows a man approaching a woman from behind at the Jackson Avenue station in the Bronx on Sunday around 4.45pm. He grabs her with both of his hands and throws her down into the tracks, a video released by the New York Police Department (NYPD) on Monday shows.

The woman is seen hitting the platform before falling down onto the tracks. A train was not approaching at the time of the incident.

Bystanders helped the woman out of the track and back on the platform, an MTA spokesperson told the New York Post. 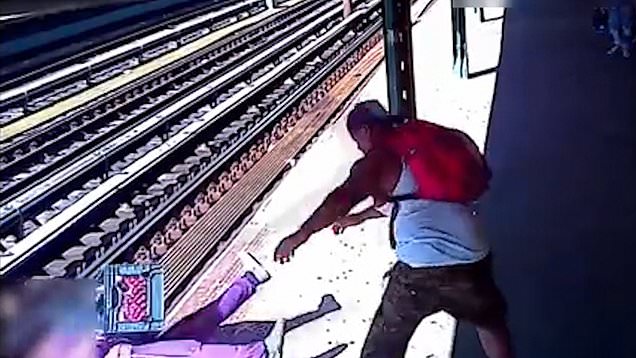 The woman sustained cuts on her head and arm. She was transported to Lincoln Hospital in stable condition, cops said.

Police arrested Theodore Ellis in connection with the attack, CBS 2 reported on Tuesday. Ellis allegedly told officers that he previously had an argument with the woman, could not remember what she said that angered him, and was not aware of his strength.

Cops are investigating whether the woman knew the suspect.

Ellis has been charged with assault and reckless endangerment.

A recent Seina Poll showed that seven in 10 New Yorkers feel less safe than they did before the coronavirus pandemic, and that 76% are worried they could be targets of a crime.

But Bronx resident Cassie Perez said she gets ‘nervous’ about riding the subway.

‘You see people get close and I’ll back up. I always remind her, stay back,’ she told CBS 2, appearing to talk about a loved one. ‘Stay close to wall, don’t leave me, and things like that.’