It was arguably the most bizarre attack to befall New York City’s subway system in recent memory.

A group of women dressed in neon green body suits swarmed a car and reportedly beat and robbed two young women, one who was celebrating her 19th birthday.

The victims, both 19, were at the Times Square station waiting for an N train around 2am on Sunday when the suspects arrived ‘loud an obnoxious’, a mother of one of the victims told the New York Daily News.

Video footage shows more than a half-dozen women in the alien-esque leotards targeting two riders inside a train car. The assailants fling and punch the teenagers in the wild, violent act. 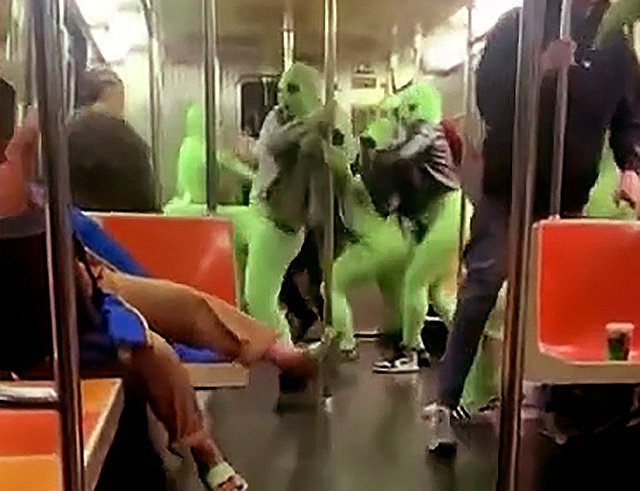 The suspects robbed the teenagers of their phones, credit cards, wallets and other items, police said. They then fled at the next stop and have yet to be arrested.

Their costumes make them difficult to identify. Most of the suspects were fully masked, but one of them had her face exposed in the video.

The mother, who remained anonymous, said ‘there were no words exchanged prior’ to the attack.

‘They just jumped. My daughter’s words were, they bum rushed them. I asked, “Why? Did you say something?” She said, “I wish I did, because then there would be a reason for what happened to me.”’

The mother added that at least four men in the car recorded the assault as it unfolded.

‘They video instead of calling 911. It’s so disturbing for me as my mother that this is the world we live in,’ she said.

‘My daughter is literally getting beat while all these bystanders just stood there. Maybe police would’ve gotten there faster if someone called 911.’

The teenagers refused medical attention in the subway but later went to a hospital. The mother described her daughter’s injuries.

‘She has a bruise of a teeth mark on her shoulder – like barbaric animals,’ the mother said. ‘They stomped her leg. She’s bruised on her lower extremities terribly, her stomach from being kicked.’