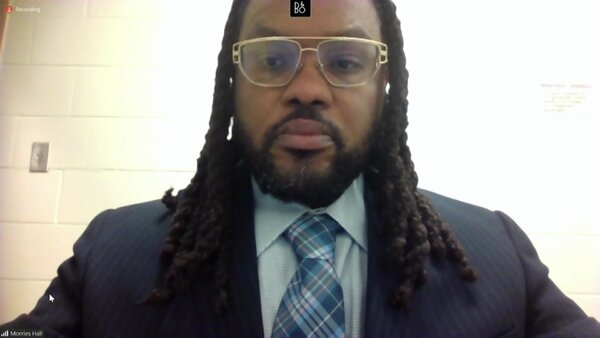 Morries Lester Hall, a friend of George Floyd’s who was in a car with him on May 25, moments before the police pulled Mr. Floyd out of the car and pinned him to the ground, is hoping to avoid testifying in the murder trial of Derek Chauvin.

At a hearing on Tuesday morning over whether Mr. Hall must testify, his lawyer said that testifying about any of his actions on May 25 had the potential to incriminate him, and that Mr. Hall planned to invoke his Fifth Amendment right against self-incrimination. Mr. Hall, who is currently in jail on charges unrelated to Mr. Floyd’s death, appeared in court by video conference, though he spoke only to spell his name and confirm that he had conferred with his lawyer.

Judge Peter A. Cahill, who is overseeing the trial of Mr. Chauvin, did not rule on whether Mr. Hall must testify, but he ordered Mr. Chauvin’s lawyer to draft a list of questions by Thursday that Mr. Hall might be able to answer without incriminating himself. Videos from the scene show that Mr. Hall was sitting in the passenger seat of a car when the police initially confronted Mr. Floyd, shortly before he was pinned to the ground and died.

Adrienne Cousins, Mr. Hall’s lawyer, said that both prosecutors and Mr. Chauvin’s lawyer, Eric J. Nelson, had subpoenaed Mr. Hall, though Mr. Nelson seemed more interested in calling him to the stand. Mr. Nelson said in court that he wanted to ask Mr. Hall a range of questions, including about whether he had given Mr. Floyd drugs, about the fake $20 bill that a convenience store clerk said Mr. Floyd used, and about why Mr. Hall left Minnesota after Mr. Floyd had died.

Ms. Cousins said that all of those questions could incriminate her client, and Judge Cahill largely seemed to agree. But the judge said there may be a narrow range of questions — possibly on how Mr. Floyd appeared to be acting in the car before the police arrived — that Mr. Hall might be able to answer without incriminating himself. Ms. Cousins strenuously disagreed, saying that even acknowledging that Mr. Hall was in the car with Mr. Floyd on May 25 could be used against him if he were to be charged with a crime based on his actions that day.

For their part, prosecutors seemed most worried about the prospect that Mr. Hall would take the stand and invoke his Fifth Amendment right in front of the jury, perhaps making them further question Mr. Floyd’s actions that day or making them concerned about what is being withheld.