New York City will no longer have a remote schooling option come fall, Mayor Bill de Blasio said Monday, a major step toward fully reopening the nation’s largest school system after more than a year of disruptions caused by the pandemic.

The announcement represents the single most important decision the city was facing on school reopening, and means that all students and staff members will be back in buildings full time.

A reopened school system is perhaps the most crucial marker of New York’s recovery. Many parents will be able to return to work without supervising their children’s online classes, which could prompt the revitalization of entire industries and neighborhoods.

“We can’t have a full recovery without full-strength schools,” Mr. de Blasio said during an appearance on MSNBC’s “Morning Joe.”

The mayor’s announcement eliminated the largest logistical obstacle to reopening the school system. But Mr. de Blasio must, in his final months as mayor, try to convince hesitant families and staff that it’s safe for schools to return to normal.

This school year, the majority of the city’s roughly one million students — about 600,000 — stayed home for classes. A disproportionate number of the families who chose online learning were nonwhite, a reflection of the disproportionate health outcomes suffered by Black and Latino families in particular when the city became a global epicenter of the virus last spring.

The mayor also said that teachers and school staff members, who have been eligible for the vaccine since January, will no longer be granted medical waivers to work from home. Nearly a third of city teachers are working from home, which has forced some schools to offer only online learning, even from school buildings.

Though reopened classrooms have been relatively safe since last fall, with very low in-school virus positivity rates and few outbreaks, the pandemic has revealed a profound lack of trust between many families of color in particular and the city school system.

In interviews, some parents who had hoped for a remote option come fall said they would consider home-schooling. New York, like many other districts, has already seen its enrollment drop during the pandemic, and more parents opting out of the public school system altogether could threaten funding and resources for the district.

Mr. de Blasio said the city would hold open houses for remote parents to tour their school buildings next month. But he said eliminating remote schooling was an essential part of the city’s push to move past the pandemic.

“We gotta understand we’re leaving Covid behind,” he said during a news conference on Monday. “We can’t live in the grip of Covid the rest of our lives.” The schools chancellor, Meisha Porter, said she would continue to hold virtual town halls for parents to ask questions about reopening, though she said she believed most parents were eager for full-time classes.

New York is one of the first big cities in the country to remove the option of remote learning altogether for the next school year, making widespread predictions that online classes would be a fixture for school districts seem premature. Gov. Philip D. Murphy of New Jersey, a Democrat, announced last week that the state would no longer have remote classes come fall. Leaders in Massachusetts and Illinois, along with San Antonio, Texas, have said there will be extremely limited remote options.

Education officials in Florida have indicated they will significantly reduce or even eliminate online classes next school year, and the superintendent of Miami-Dade schools said he expected all students to return this fall. Houston, one of the largest districts in the country, will keep a remote option for fall, as will Philadelphia.

Mr. de Blasio said the city would not offer any virtual instruction next year, except for snow days, which are rare in New York. The mayor has tried to position himself as a leader on school reopening, especially as other cities led by Democrats delayed their own reopening plans last summer and fall. 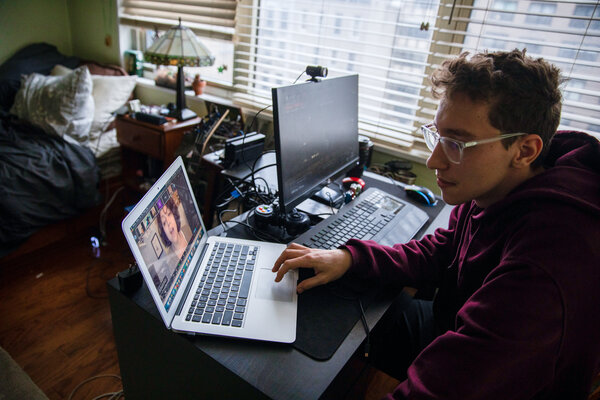 “There is no substitute for in-person instruction,” Michael Mulgrew, the union president, said in a statement. “New York City educators want their students physically in front of them.”

Mark Cannizzaro, president of the city’s principals’ union, thanked the mayor for making the announcement with enough time to start planning for the fall. Last year, the city rolled out its school reopening plan in July, which was far too late for principals to plan schedules and staffing.

New York’s school system, like districts across the country, has struggled to make remote learning successful.

Though some students and families have said a remote option has worked for them, and allowed students to focus on classes without distractions, online learning has been frustrating for the vast majority of students and disastrous for others, including many children with disabilities. Mr. de Blasio, who has been criticized for not doing more to improve the quality of online education, has argued that remote learning is inherently inferior, a view shared by many educational experts.

It has also been extraordinarily complex for the city to run two parallel school systems, one in-person and one online, with many students switching between the two every few days. The fact that so many students and teachers were learning and working from home made it nearly impossible for some schools to offer normal schedules. The challenges of hybrid learning have been felt by districts across the country, but are particularly acute in New York, with its 1,800 schools.

For the past few months, Mr. de Blasio had been saying that he expected the city to keep some kind of remote learning option for the fall. But he and his aides changed their minds in recent weeks, he said during a news conference, as virus rates plummeted throughout the city and children 12 and above were made eligible for the Pfizer-BioNTech Covid-19 vaccine.

On Monday, the city’s average positive test rate dropped to just over 1 percent, the lowest number since last September. Roughly four million New Yorkers have had at least one vaccine dose, including thousands of children.

The city is not yet requiring eligible students or staff members to be vaccinated before they return to classrooms this fall, and just under half of educators have not yet gotten the shot. If many more teachers are not vaccinated by September, it could undermine the city’s reopening plan and the mayor’s promises about preventing outbreaks.

Mr. de Blasio said all students and adults would have to wear masks in schools this fall, in accordance with the current guidance from the Centers for Disease Control and Prevention. But he said that requirement could change if the C.D.C. loosens its guidance.

The mayor also said he expected the C.D.C. to drop its current rules on keeping three feet of distance between students in classrooms before the start of the next school year, though he added that the vast majority of schools could fit all students even with social distancing.