State prosecutors in Manhattan investigating former President Donald J. Trump and the Trump Organization have subpoenaed the personal bank records of the company’s chief financial officer and are questioning gifts he and his family received from Mr. Trump, according to people with knowledge of the matter.

In recent weeks, the prosecutors have trained their focus on the executive, Allen H. Weisselberg, in what appears to be a determined effort to gain his cooperation. Mr. Weisselberg, who has not been accused of wrongdoing, has overseen the Trump Organization’s finances for decades and may hold the key to any possible criminal case in New York against the former president and his family business.

Prosecutors working for the Manhattan district attorney, Cyrus R. Vance Jr., are examining, among other things, whether Mr. Trump and the company falsely manipulated property values to obtain loans and tax benefits.

It is unclear whether Mr. Weisselberg would cooperate with the investigation and neither his lawyer, Mary E. Mulligan, nor Mr. Vance’s office would comment. But if a review of his personal finances were to uncover possible wrongdoing, prosecutors could then use that information to press Mr. Weisselberg to guide them through the inner workings of the company. The 73-year-old accountant began his career working for Mr. Trump’s father.

Separately, the prosecutors are also seeking a new round of internal documents from the Trump Organization, including general ledgers from several of its more than two dozen properties that the company did not turn over last year, according to the people with knowledge of the matter, who spoke on the condition of anonymity to discuss sensitive details.

The ledgers offer a line-by-line breakdown of each property’s financial situation, including daily receipts, checks and revenues. The prosecutors could compare those details against the information the company provided to its lenders and local tax authorities to assess whether it fraudulently misled them.

Mr. Vance’s office has also subpoenaed records from several banks where Mr. Trump or his company had accounts, including JPMorgan Chase and Capital One, according to people with knowledge of subpoenas served on the banks.

The previously unreported developments underscore the escalation of the investigation after Mr. Vance’s office obtained Mr. Trump’s tax records and other underlying financial documents in February. They were released over Mr. Trump’s objections after a lengthy legal battle that culminated in a ruling from the United States Supreme Court. 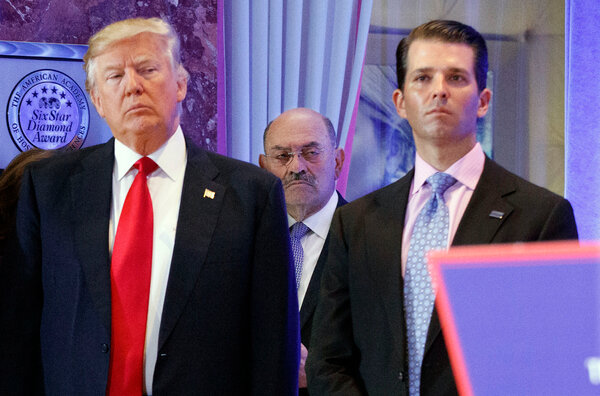 The Trump Organization declined to comment. In the past, Mr. Trump, a Republican, has denied any wrongdoing and has slammed the investigation as a long-running and politically motivated “fishing expedition.” Mr. Vance, a Democrat, recently announced that he was not seeking re-election.

The investigation has centered on some of Mr. Trump’s most prominent properties: Trump Tower on Fifth Avenue in Manhattan, the Trump hotels in New York and Chicago and the Seven Springs estate in Westchester County. In addition to possible tax- and bank-related fraud, the prosecutors are examining the Trump Organization’s statements to insurance companies about the value of various assets.

Prosecutors have subpoenaed records from a firm hired by Deutsche Bank, one of the former president’s main lenders, to assess the value of three Trump hotels with Deutsche Bank loans, people with knowledge of the matter said. The firm reviewed the operations of restaurants, bars and gift shops at the hotels, one of the people said.

Last year, the prosecutors subpoenaed Deutsche Bank itself and Mr. Trump’s other main lender, Ladder Capital, which sold its Trump Organization loans years ago. Both banks are cooperating with the prosecutors.

It is unclear whether the prosecutors will ultimately file any charges. But if a case were built against the Trump Organization based on the loan documents, the company’s lawyers could argue that Deutsche Bank and Ladder Capital are sophisticated financial institutions that conducted their own analysis of Mr. Trump’s properties without relying on the company’s internal assessments. The lawyers could also emphasize that providing different valuations for a property depending on the situation — for example, on a loan application or in appealing local property taxes — is common and appropriate in New York’s real estate industry, in part because there are varying methods for calculating property values.

Yes. Hours after the Supreme Court rejected Mr. Trump’s final bid to defy a 2019 subpoena, millions of pages of records were turned over to the Manhattan district attorney’s office, which is now combing through them.

The investigation is wide-ranging, but one particular area of concern is whether Trump’s company manipulated its property values, inflating them to obtain favorable loans while lowballing them to reduce its taxes. Investigators have also focused on the company’s long-serving chief financial officer.

The records turned over to the district attorney’s office will remain private unless they are presented as evidence at a trial, but The Times has already uncovered a variety of potential financial improprieties, based on more than two decades of Mr. Trump’s tax data.

If the district attorney were to indict Mr. Trump — far from a sure thing — the result would be the potential criminal trial of a former president. For his part, Mr. Trump has dismissed the investigation as a politically motivated “fishing expedition” and vowed to “fight on.”

Outside accountants also vet the information provided to local tax authorities, potentially reducing the likelihood of fraud. Mr. Trump has argued that his tax returns “were done by among the biggest and most prestigious law and accounting firms in the U.S.”

In addition to the fraud investigation, Mr. Vance’s office continues to focus on its original target: the Trump Organization’s role in paying hush money during the 2016 presidential campaign to two women who said they had affairs with Mr. Trump.

Mr. Trump’s former personal lawyer and fixer, Michael D. Cohen, paid $130,000 to buy the silence of one of the women, Stephanie Clifford, the pornographic film actress who performed as Stormy Daniels. The Trump Organization later reimbursed Mr. Cohen, and Mr. Vance’s office has scrutinized whether the company properly accounted for the $130,000 payment.

Mr. Cohen, who in 2018 pleaded guilty to federal campaign finance charges for his role in the hush-money scheme, has long implicated Mr. Weisselberg, alleging that he helped devise a strategy to mask the reimbursements. The federal prosecutors who charged Mr. Cohen did not accuse Mr. Weisselberg of wrongdoing.

Mr. Cohen is now cooperating with Mr. Vance’s investigation and has met with prosecutors several times, including to review some of Mr. Trump’s financial documents. Lanny Davis, a lawyer for Mr. Cohen, declined to comment.

Ms. Weisselberg said in an interview that prosecutors have asked her about a number of gifts that Mr. Trump and his company gave the Weisselberg family over the years. These include an apartment on Central Park South for Ms. Weisselberg and her former husband, cars leased for several family members and private school tuition.

The scrutiny of the gifts appears to be part of an effort to paint a picture of Mr. Weisselberg’s financial life, as is common when prosecutors seek cooperation from a potential witness. It is unclear whether prosecutors suspect any wrongdoing related to the gifts.