The grisly discovery captured the tragedy and chaos of the pandemic at its height in New York City: dozens of bodies found decomposing in a pair of trucks parked outside a Brooklyn funeral home, supposedly because it had run out of space.

Following an investigation into the Andrew T. Cleckley Funeral Home, the state health commissioner on Monday revoked the funeral director’s license and the mortuary’s business registration, saying he had mishandled the remains of the deceased. Mr. Cleckley was also fined $68,000 in civil penalties.

He is already facing six lawsuits accusing him and other funeral directors who operated out of his mortuary of failing to carry out their duties to handle remains respectfully and lawfully. Some families say that their loved ones’ remains were kept in an unrefrigerated truck or otherwise stored improperly.

Mr. Cleckley said Tuesday that the bodies found in the trucks had not been under his care, but were the responsibility of the other funeral directors he rented his mortuary out to.

“There were other funeral homes operating out of this place who had the remains, that weren’t doing their responsibilities and disposing of the remains in a timely fashion, nor treating them with proper respect and care,” he said in an interview.

A state health official said Mr. Cleckley was given the opportunity this summer to defend his case in front of an administrative law judge. The judge ultimately made the recommendation to revoke Mr. Cleckley’s license and issue a civil penalty, which Howard Zucker, the New York State health commissioner, upheld on Monday.

Under state regulations, funeral directors are required to store bodies awaiting burial or cremation in appropriate conditions that prevent infection to others.

“The department maintains very strict standards that funeral homes have to adhere to in terms of managing capacity appropriately, and also making sure that they are appropriately providing services in a respectful and competent manner,” said the official, Gary Holmes, a spokesman for New York State Department of Health.

At the height of the pandemic, the state provided refrigerated trailers to funeral homes, like those that the city has provided to hospitals around New York, he said, and also eased restrictions on licenses so that out-of-state funeral directors could come and volunteer their services. 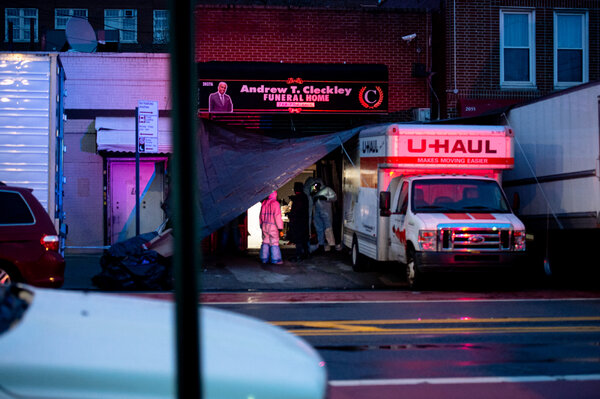 Mr. Cleckley was seen on Tuesday packing belongings into a van outside his funeral home on Utica Avenue, which sits between a Dollar Store and a shop selling lingerie.

The funeral home had been inundated with bodies, he said, because cemeteries and crematories were overwhelmed.

“This was crazy. New York City, New York State did nothing to help us funeral directors,” he said.

At the height of the outbreak, New York City’s system to handle the dead — its hospital mortuaries, cemeteries, crematories and city-run morgues — was under extraordinary strain, as beleaguered workers tried to grapple with the single worst mass casualty event to hit the city since the Spanish flu pandemic a century ago.

Funeral directors were caught between the volume of bodies coming out of hospitals and nursing homes, and the backlogs that made them unable to cremate or bury people quickly.

Mr. Cleckley opened his funeral home in 2015 with his wife and initially built a business serving other local morticians by transporting bodies to them. But in 2017, he said, he started offering a full line of services, like embalming and cremation, to his partners.

In April, neighbors complained of a stench coming out of a U-Haul and a trailer-truck in front of Mr. Cleckley’s funeral home. At the time, Mr. Cleckley said that he had been overwhelmed by the relentless tide of bodies during the pandemic. He said he had used the trucks for overflow storage, but only after he had filled his chapel with more than 100 corpses.

“I ran out of space,” he said. “Bodies are coming out of our ears.”

Mr. Cleckley, 41, who grew up in Queens, said Tuesday he didn’t have enough money to pay the $68,000 fine. His lawyer, Robert Osuna, criticized the commissioner’s decision, saying that Mr. Cleckley was being held responsible because he was the main leaseholder of the funeral home and that the other funeral services were not being investigated.

“He was scapegoated for the entire funeral industry,” Mr. Osuna said. “The crematories had shut down, families were pressuring funeral home directors. There was a great deal of pressure and to hold him solely responsible is wrong.”

“Cleckley was an essential worker,” he added, “but he is the only one punished for his service.”

A handful of lawsuits have been filed against Mr. Cleckley, as well as Armistead Burial and Cremation Services, one of the firms that operated out of the funeral home.

In one lawsuit, Assata Constant, whose father died in late March, said that after taking her father’s remains to Mr. Cleckley’s funeral home, she was told by an employee that U-Haul trucks were being used specifically for storage of bodies.

When Ms. Constant visited the funeral home in April, the lawsuit says, she “observed numerous exposed and decomposing bodies, including bodies stored in unrefrigerated ‘U-Haul trucks.’”

Relatives of Hermite Mercius, who died in April, said in another lawsuit that they had contracted out Armistead Funeral Services to take her remains. But they became alarmed when the photographs they requested of Ms. Mercius looked nothing like her. When they asked for additional photographs to make sure her remains were being treated appropriately, they said Armistead did not respond.

Worried, the family went to the funeral home, the lawsuit said, and “to their horror, learned from the Medical Examiner’s Office that her uncremated remains were found among the many dozens of bodies found stuffed into an unrefrigerated U-Haul and stacked inside a small room at Cleckley.”

Kimoya Francis also used Mr. Cleckley’s services after her brother died on March 31. His body was not among those found in the trucks, but had been left in the funeral home for about five days in early April.

When she saw her brother’s body a day before the funeral, “it was clear that something had gone wrong,” she said in an interview Tuesday. Ms. Francis and her mother filed a lawsuit against the funeral home in May.

“He didn’t look like himself anymore. It was clear that he was improperly stored,” Ms. Francis said. “It’s bad enough that he died, but then to have his remains disrespected, it’s still shocking.”

“If it’s the case that funeral homes were overflowing then stop accepting bodies,” she said. “Don’t just throw them around.”

Mr. Cleckley insists he did his best to take care of the remains of the deceased. “I was trying to help my fellow New Yorkers get through the roughest time in, in the last hundred years,” he said. “I was a victim of circumstance.”