In a year like 2020, it only seems fitting that New York’s ski season started off with a catastrophe.

It was early Christmas morning when snow from a trail on Belleayre Mountain loosened and plummeted into a mid-mountain lodge, smashing doors and windows. Although the incident wasn’t technically an avalanche, its aftereffect certainly looked like one.

“I have worked here for 20 years, and I haven’t heard anything like this happening in the Catskills,” said Joe McCracken, the marketing manager at Belleayre. “We never would have even thought about this happening.”

The bizarre holiday snowslide is just one of the many challenges facing the ski resorts of New York state as they approach obstacle after obstacle while trying to function during a pandemic.

For New Yorkers who can afford to ski, it is considered to be safe these days (at least when it comes to viral spread). After all, participants are often already wearing a mask and goggles, the equipment keeps people naturally distanced from others, and most important, the sports take place outside.

But while local resorts are dealing with their new hot spot status — brought on by a serious skiing demographic that is adhering to strict travel regulations and are therefore staying in-state — ski resorts are also operating at reduced capacity. 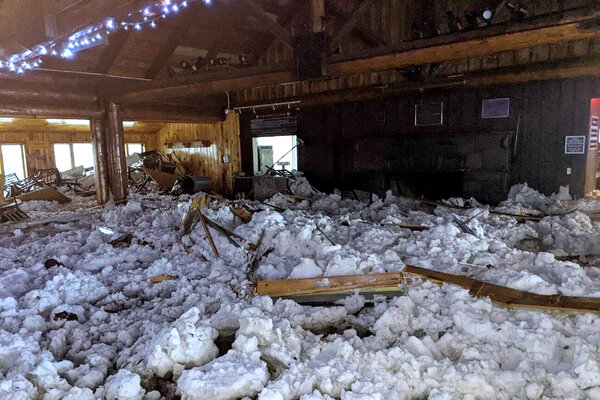 Basically, there are more people and fewer lift tickets.

Add to this a reduced work force, attributable to seasonal employees, often from overseas, who cannot travel, as well as a virus that can send dozens home immediately if there is even a hint of exposure. Hunter Mountain closed for three days in early January, citing this very reason.

There is also the financial hit: Food and drink, a significant source of income for resorts, is not bringing in the money it should, since lodges are operating at 50 percent capacity.

“There is nothing simple about operating during a pandemic,” said Andy DeBrunner, a spokesman for Vail Resorts, which owns Hunter.

But for many, the fact that skiing is happening at all is a small miracle. “What’s the positive?” said Laszlo Vajtay, owner of Plattekill, a family owned mountain in the Catskills. “At least we are freaking open.”

As New York resorts adapt to these strange days, surprising innovations, improvisations, and yes, a few problematic issues are cropping up. Here’s an overview.

Competition is fierce for those lift tickets.

Every New Year’s, David Feng, a doctor who lives in Wall, N.J., takes his teenage sons to Hunter Mountain. “We get up early, ski really hard, have a nice long lunch at the Kaatskill Mountain Club right at the mountain,” he said. “It’s tradition.”

But this year, around Christmas, when he tried to book lift tickets, they were already sold out. The family stayed home.

Capacity restrictions have turned the lift ticket into a sought-after prize. Windham Mountain, in Windham, N.Y., reduced capacity from 7,000 to 3,000 skiers; lift tickets are sold out for the next eight weekends. “As a marketing guy, it is hard to say no to people when it comes to their willingness to buy a lift ticket,” said Dave Kulis, the resort’s director of sales and marketing.

At Plattekill, the phones are ringing off the hook, either with people saying they have been exposed to the virus and need to change their dates, or with those simply trying to procure a lift ticket at all, Mr. Vajtay said. “It’s hard to tell whether people are telling the truth,” he explained. “Some people are saying they work on the front lines, and they just found out they got the weekend off.”

An imperfect solution is to book in advance, which is what the Feng family decided to do after their New Year’s plans fell through, despite some reservations. “We like to wait until the last minute because conditions matter, weather matters,” Mr. Feng said. He made reservations for the weekend of Martin Luther King’s Birthday, about three weeks away at the time. “I’m not about planning weeks in advance,” he said, “but I don’t want to be left hanging.” But the planning didn’t pan out: there was an emergency and the family couldn’t go. Mr. Feng was refunded the cost of the tickets, “no questions asked,” he said.

Technology on the slopes

“It’s really cool,” said Justin Cooper, the marketing and sales manager of Mount Peter, a small resort in Warwick, N.Y. “We now put our ski rentals, our tubing equipment, under this UV light to get rid of all pathogens. We have these big lights in the lodge, and we have portable lights to clean bathrooms on the mountain.”

Many resorts have introduced new sterilizing technologies that could remain in use long after the pandemic. “These lights don’t just kill Covid but colds and flu,” Mr. Cooper said.

Plattekill, among other resorts, has installed a new computer system that allows every part of a day at the mountain to be booked and managed online, from lift tickets to lessons. It also allows for employees to preset rental equipment and have it waiting for guests. “It’s like the E-ZPass of skiing,” Mr. Vajtay said.

Rise of the midweek warrior

Emily and Claire Loughran grew up outside Kingston, a 40-minute drive to most Catskill ski resorts. As children, the sisters visited Windham, where their father was a member of the ski patrol. In high school they took buses to Belleayre every Saturday with their friends.

But as adults in Manhattan, they didn’t ski at all. That changed when they decided to move home during the pandemic and start their own company. One of the perks? They rediscovered skiing.

On a recent Tuesday, they headed to Belleayre, since their work was flexible and the sisters thought it would be less crowded. “It felt so good,” Claire said. “There are certain runs that I know by heart, and it brought back a lot of fun memories.”

Alana Tsui, a world traveler who has respected Covid rules and remained in the country over the past year, decided to try snowboarding for the first time with her boyfriend over the holidays. “We were just looking for something to do, something fun to start off the new year,” she said. The couple booked a rental house and made reservations at Belleayre for Tuesday through Thursday. “It’s less crowded, and there are cheaper lift passes during the week,” she said. “I definitely want to go back.”

Après-ski moves to the parking lot

Tailgating to avoid the lodges

One big change the Loughran sisters noticed on their trip to Belleayre was a new outdoor dining scene, but not one with heat lamps and scannable menus.

As they ate soup in their cars, they noticed they weren’t alone in the parking lot. “We definitely saw people full-on tailgating, like they were going to a football game,” Emily Loughran said. “There was a tent. There were some grills. We saw a lot of beer.”

Local mountains are encouraging this behavior. Windham, for example, has eliminated indoor dining from all restaurants except one. At Hunter you have to make a reservation to step inside a lodge, even if you are just buying food to bring outside.

Mount Peter turned some of its grassy area at the bottom of the mountain into a space for more food trucks and picnic tables. This year Plattekill installed a new outdoor bar with two firepits and deck heaters.

Still, many skiers are opting for the parking lot. “People are bringing barbecues and coolers,” Mr. Vajtay said. “Ordinarily we would stop them from doing this, but this year, we just can’t. There are people who just don’t want to come into the building.”

And it’s not just the visitors. “Our employees are choosing to take breaks, including eating lunch, in their cars,” said Mr. Cooper, of Mount Peter.

The pitfalls of seasonal employment

In a less populated area like the Catskills, it’s not easy staffing a mountain, said Mr. Kulis, of Windham. “In a typical year, we employ 40 or so international employees, mostly students on J-1 visas who come in from other countries,” he said. “Not this year.” A month into the season, Windham still has available positions.

Plattekill lost its overnight snow-making manager during the lockdown last spring to another company that remained open, so Mr. Vajtay himself took on snow-making duties during the day, transferring his day manager to nights. “It’s been very rough,” he said.

The temporary shutdown of Hunter Mountain earlier this month proved that resorts are at constant risk of spread.

Although resorts require staff to wear masks, socially distance, and fill out symptom questionnaires before work every day, there are no safety guarantees.

The largest worry among New York ski resorts is a statewide lockdown. But maybe they shouldn’t be so concerned, if the country of Austria is any example. Even though its third national lockdown was recently extended to February, shuttering museums and many shops, its ski lifts remain open.