Native Americans notched historic electoral wins on Tuesday, in a country where indigenous people were not granted the right to vote until 1924.

The victories, in an array of federal, state and local races, did not come easily. They took decades of grass-roots organizing, legal battles to redraw voting districts favoring white candidates, new sources of campaign money and the harnessing of visceral reactions to President Trump’s use of slurs against Native Americans.

And they took strong candidates with a winning combination of political credentials and personal experiences that resonated with voters.

“The candidates themselves were just exceptional in this year’s races,” said Mellor Willie, a founder of 7Gen Leaders, a “super PAC” formed this year to bolster emerging Native American political leaders. “But it often comes down to money, and that’s where we came in.”

7Gen Leaders was a crucial source of financing for the two Native American women elected this week to the United States House of Representatives: Deb Haaland, Democrat of New Mexico, a community organizer and a member of Laguna Pueblo; and Sharice Davids, Democrat of Kansas, a former mixed martial arts fighter and a member of the Ho-Chunk Nation.

“These are Native women who have paid their dues for years to make this moment happen,” said Mr. Willie, whose organization receives funding from abortion rights activists and tribes including the Yocha Dehe Wintun Nation of California and the Shakopee Mdewakanton Sioux Community of Minnesota. 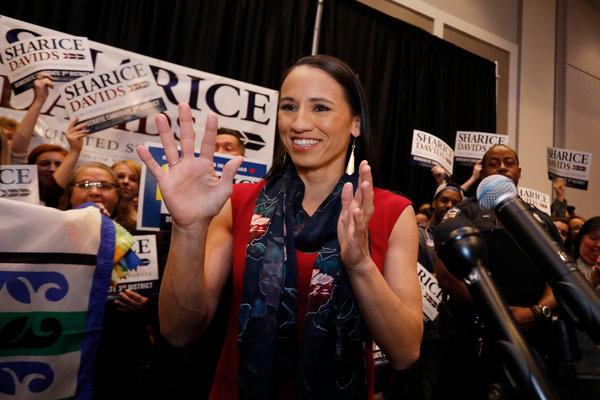 Ms. Haaland cut her teeth for years as a community organizer and as the chairwoman of New Mexico’s Democratic Party. She came out swinging against the Trump administration’s immigration crackdown, discussed the challenges of being a single mother and promoted indigenous sovereignty as a professed “35th-generation New Mexican.” In a relatively liberal district encompassing Albuquerque, that messaging worked.

“I’ve been organizing in New Mexico for close to 20 years, so it’s not like people weren’t familiar with me or what I stand for,” Ms. Haaland, 57, said in a telephone interview on Wednesday. “We have an extremely divisive president who disparages so many people. I felt like it was just time to stand up with a positive campaign.”

Another congressional race in New Mexico involving a Native American candidate remains undecided, with the Republican, Yvette Herrell, a member of the Cherokee Nation, in a tight contest with Xochitl Torres Small, a Democrat and water rights lawyer. Unlike many Native American politicians in other races, Ms. Herrell did not promote her indigenous heritage while campaigning.

In Kansas, Ms. Davids can add another first to the record books: She is the first openly lesbian candidate to be elected to Congress from the state. She attended Cornell Law School and was a White House fellow in the Obama administration before mounting a campaign highlighting her heritage, sexual orientation and martial-arts mettle.

“It’s 2018 and women, Native Americans, gay people, the unemployed and underemployed have to fight like hell to survive,” Ms. Davids, 38, said in one of her campaign ads. “It’s clear Trump and the Republicans in Washington don’t give a damn about anyone like me or anyone who doesn’t think like them.”

“Sharice not only won but just took out a rising star of the Republican Party,” Professor Schroedel said, referring to Ms. Davids’s opponent, Representative Kevin Yoder, a four-term incumbent who championed conservative causes. “Democrats have been targeting that seat for several cycles and she showed them how to get it done.”

The election of Ms. Haaland and Ms. Davids will double the number of Native Americans in Congress. They will join two Republicans from Oklahoma, Tom Cole, a member of the Chickasaw Nation, and Markwayne Mullin, of the Cherokee Nation.

Native American voters and candidates still face several challenges, and not all won on Tuesday. Paulette Jordan, a Democrat and a member of the Coeur d’Alene, was trying to become the first Native American governor but lost her race in Idaho.

And a new law in North Dakota that required voters to have a residential address effectively made it harder for many Native Americans who rely on post office boxes. The Supreme Court upheld the law in October. Still, Native American voters, who tend to support Democrats, turned out in relatively large numbers in parts of North Dakota.

That was not enough to prevent Senator Heidi Heitkamp, the Democratic incumbent, from losing the race. Some observers cited Ms. Heitkamp’s ambiguous positioning on the Dakota Access pipeline, the focus of tense protests by many Native Americans in North Dakota, as complicating her re-election bid.

Congressional victories in the midterms drew the most attention, but Native American political organizers say that advances at the state and local levels were just as crucial. They cited continuing battles to enfranchise voters across the country who have long been marginalized.

States including New Mexico and Arizona effectively barred many Native Americans from voting for decades after they were given the right in the 1920s. Elsewhere, districts were gerrymandered to bolster white candidates.

In San Juan County in southeastern Utah, where Native Americans have long outnumbered white people, Navajo Democrats waged a protracted legal battle to realign voting districts to better reflect the county’s population. A federal judge in 2017 ordered the county to redraw boundaries to give Navajos a majority in two of three county commission districts.

The battle did not end there: Republicans in the county tried to prevent a Navajo candidate, Willie Grayeyes, from running for county commission this year, saying he lived across the Utah border in Arizona. Officials removed Mr. Grayeyes from the ballot before a federal court determined that a county clerk had falsified documentation in the case.

Mr. Grayeyes appeared on the ballot on Tuesday. And he won.