Ned Lamont, a Democrat and wealthy business owner, won the governor’s race in Connecticut on Wednesday, helping his party hold on to a vulnerable seat and overcoming a fierce challenge from a Republican opponent who tried to tie him to the state’s unpopular incumbent and a slumping economy.

Mr. Lamont, 64, defeated Bob Stefanowski, the Republican candidate and a former business executive, according to The Associated Press. Wet ballots delayed the counting of the votes, and Mr. Lamont was not declared the winner until Wednesday morning.

“I’m humbled, and I want every resident to know how grateful I am for this extraordinary honor,” Mr. Lamont said in a statement. “I will work every day — honestly and thoughtfully — to move this state forward and be a champion for Connecticut.”

With 94 percent of precincts reporting, Mr. Lamont captured 48.4 percent of the vote to Mr. Stefanowski’s 47.1 percent, according to The A.P.

Oz Griebel, an independent candidate, took 3.9 percent of the vote.

The vote tally in Connecticut was delayed overnight because ballots had become wet when voters, caught in the rain, dripped onto the voting cards, Secretary of State Denise W. Merrill had said early Wednesday. Machines could not read wet ballots, she said.

Although Connecticut is a decidedly blue state, Mr. Lamont’s victory was hard-won. Connecticut, along with Oregon, was seen as one of only two states where Democrats were in danger of losing a governor’s seat. The Democratic candidate won in Oregon, and the party flipped seven governor’s seats this cycle, in Kansas, Wisconsin, Maine, Michigan, Nevada, Illinois and New Mexico.

Throughout the campaign, Mr. Stefanowski, a political neophyte, sought to tie Mr. Lamont to Gov. Dannel P. Malloy, a Democrat who did not run for a third term. Mr. Malloy’s approval ratings have ranked among the lowest in the country.

Mr. Lamont’s campaign looked to portray Mr. Stefanowski as an acolyte of President Trump, who remains out of favor in a state where Democrats outnumber Republicans five to three. The state voted for Democratic candidates in the last seven presidential elections, including in 2016, when Mr. Trump received 40.9 percent of the vote compared with Hillary Clinton’s 54.6 percent.

The founder of a company that delivered cable television to college campuses, Mr. Lamont faces the task of fixing Connecticut’s fiscal woes, highlighted by a budget deficit that is projected to surpass $4 billion over the next two years. Mr. Lamont’s proposals have centered on economic development and job training, in contrast to his opponent’s calls to cut state spending and reduce taxes.

Mr. Lamont, who contributed millions to his own campaign, has made several attempts at winning a high-profile public office.

In 2006, he angered some party Democrats when he mounted a surprising primary upset of former Senator Joseph I. Lieberman. Mr. Lieberman, however, ran as an independent and defeated Mr. Lamont in the general election. In 2010, Mr. Lamont fell short in a bid for the Democratic nomination for governor. 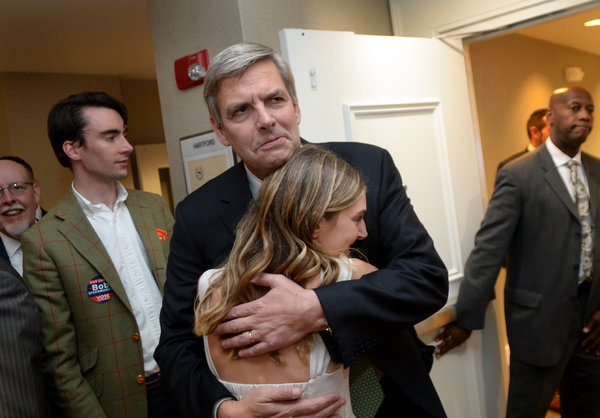 Mr. Murphy’s decisive victory — the race was called immediately after polls closed at 8 p.m. on Tuesday — came after he spent much of the election cycle campaigning for other Democrats, including Mr. Lamont and Jahana Hayes, a first-time congressional candidate.

Mr. Murphy, who became one of the nation’s leading advocates for gun control after the 2012 mass shooting at Sandy Hook Elementary School, may turn his attention to what is expected to be a crowded presidential field. Though he is not considered a front-runner for the Democratic nomination, he has been among a small group of Democrats courting top New York donors.

“We are not a nation that tolerates bullies or wannabe tyrants,” Mr. Murphy said. “We are a democracy, and maybe louder and clearer than anything we can say tonight, we’re saying, here in Connecticut, that if you come after our democracy, then we are coming for you.”

In the House, Democrats held onto all five of the state’s seats, with four incumbents winning re-election.

Ms. Hayes, a political newcomer and former “National Teacher of the Year” who won a long-shot primary race, will become the first black Democrat to represent Connecticut in Congress.

Ms. Hayes, 45, easily defeated her opponent, Manny Santos, a Republican and former mayor of Meriden. Elizabeth Esty, the incumbent Democratic representative, did not seek re-election after a sexual harassment case involving her former chief of staff.

During her campaign, Ms. Hayes often told her life story, one that she said differentiated her from most politicians. She experienced homelessness as a child, became pregnant as a teenager and faced economic struggles.

“The thing is while it may be atypical for a member of Congress, it’s not really that strange for people in our communities,” Ms. Hayes said in an interview after her victory. “If we are truly representing people, we have to have a true understanding of what people are experiencing and what they’re going through.”

Kevin Lembo, a Democrat, won a third term as the state comptroller, and Ms. Merrill, also a Democrat, was re-elected to a third term. Shawn Wooden, a Democrat and the former Hartford City Council president, defeated Thad Gray, the Republican candidate and a retired Wall Street financier, in the race for treasurer. The race for attorney general remained too close to call, but Democrat William Tong was holding onto a lead.

In Hartford, Democrats also looked poised to take control of the State Senate, breaking the tie the two parties have shared since 2016.