Now the group has found its next New York target: Representative Carolyn B. Maloney, 75, a Democrat first elected to Congress in 1992, who chairs the House Committee on Oversight and Reform.

Justice Democrats will throw its support behind Rana Abdelhamid, a community organizer and nonprofit founder, in her bid against Ms. Maloney, laying the groundwork for a generational, ideological and insider-versus-outsider battle that will test the power and energy of the left with President Donald J. Trump now out of office.

Ms. Abdelhamid, a 27-year-old member of the Democratic Socialists of America who is keenly focused on matters of housing access and equity, intends to officially launch her candidacy for the 2022 primary on Wednesday.

“We strongly believe in Rana’s leadership capabilities to build a coalition like we’ve been able to in some of our previous elections,” said Alexandra Rojas, the executive director of Justice Democrats, adding that she believed Ms. Abdelhamid could connect with younger voters, working-class voters of color, some older white liberals and those inspired by left-wing leaders like Senator Bernie Sanders and Ms. Ocasio-Cortez.

Ms. Maloney’s district, the 12th District of New York, is home to wealthy, business-minded moderates along the East Side of Manhattan. But it also includes deeply progressive pockets of the city in western Queens and a corner of Brooklyn with a well-organized left-wing activist scene.

There is great uncertainty around what the district will ultimately look like following an expected redistricting process, and Ms. Abdelhamid is not Ms. Maloney’s only likely challenger; Suraj Patel, who has unsuccessfully challenged Ms. Maloney twice, has indicated that he intends to run again.

But for now, Ms. Abdelhamid’s candidacy will measure whether New Yorkers reeling from the pandemic and navigating economic recovery are skeptical of elevating another political outsider to steer the city forward — or if vast inequalities, which only worsened over the last year, have put the electorate in an anti-establishment mood.

Ms. Abdelhamid, a daughter of Egyptian immigrants, is a 2015 graduate of Middlebury College and 2017 graduate of the Harvard Kennedy School, with a day job at Google. A first-degree black belt in karate, she founded a nonprofit called “Malikah” — “queen” in multiple languages — that offers self-defense training and other efforts to empower women, an initiative she launched after a man tried to yank off her hijab when she was a teenager. 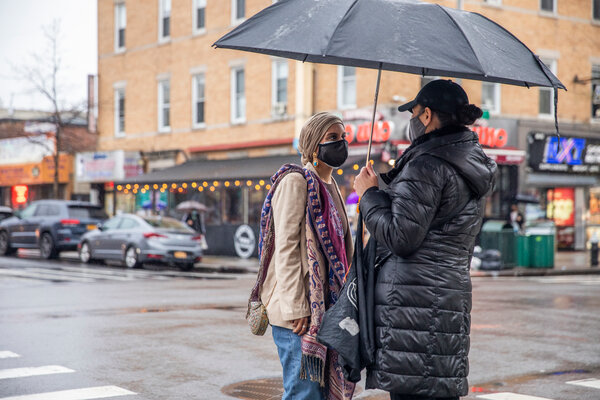 She embraces her age as she casts herself as a change agent who keenly understands the challenges facing working-class and immigrant communities in the district: Her own family was priced out of the area.

“Congresswoman Maloney has been in office for 28 years, for longer than I’ve been alive,” she said in an interview this week, sitting outside a restaurant on a crowded street in the Little Egypt enclave of Astoria, Queens. “Under her leadership, rent has only skyrocketed, our public schools have only gotten more segregated and more underfunded.

Ms. Maloney describes herself as a “a recognized progressive national leader,” and her allies say that she has a long record of delivering for constituents — indeed, a map on her congressional website offers a detailed guide to the funding she says she has procured for projects across the district.

“Carolyn is committed to running again regardless of who’s running against her, and she will wage an aggressive campaign as she always does,” said Jim Duffy, a partner at Putnam Partners, which works with Ms. Maloney’s campaigns. “She’s never lost a race before. She doesn’t intend to lose this one.”

She was not made available for an interview on Tuesday.

Ms. Abdelhamid unquestionably still faces an uphill battle against a seasoned, well-known congresswoman who is in a position to claim credit for tangible federal assistance for New York.

“She’s an extremely hard worker, she delivers for her district, she works very hard on individual cases,” said George Arzt, a veteran political consultant who has advised Ms. Maloney. “Everyone in her district knows her.”

And nationally, candidates backed by Justice Democrats have far from a perfect record of success.

But the recent history of New York politics also shows why Ms. Abdelhamid’s entry into the race is likely to be taken very seriously.

In 2018, Ms. Ocasio-Cortez, then 28, defeated Mr. Crowley, who at the time was the No. 4 Democrat in the House. Last summer, Mr. Bowman beat Mr. Engel, the chairman of the House Foreign Affairs Committee.

Strategists who worked with those campaigns see another opportunity for significant grass-roots engagement in 12th district, given the leftward shift of New York politics. “This is a place where our base is active, and a lot of voters and folks that power a lot of the most recent local campaigns over the past few years are here,” Ms. Rojas said.

Ms. Maloney, a battle-tested candidate, won her primary contests in 2018 and 2020 — though last year, she only received 43 percent of the vote.

Ms. Abdelhamid is running on a platform of housing affordability and a range of other left-wing priorities, including Medicare for All, the Green New Deal and a broadly anti-corporate message. She said she shared a number of goals and values with the Democratic Socialists, but that she was not especially active in a local chapter of the group.

She also supports defunding the police, describing experiences with family members who were the subject of stop-and-frisk tactics and raising the issue of police surveillance of Muslim communities. As a victim of assault herself in the hijab incident, she said, she believed in directing more funds to community services, and she speaks passionately about racial justice.

But she is likely to face intense scrutiny over her ability to navigate Washington. And she volunteered that she does not live in the district, living instead with her family, whom she says she is supporting financially, in a different part of Astoria — a fact that is almost certain to become an issue in the campaign.

She did live in the district until high school, her team says, but her family moved because the area became too expensive. She sought to frame her current living situation as a reflection of how unaffordable the area has become under Ms. Maloney’s leadership. Ms. Abdelhamid, who is getting married, indicated that she plans to move back to the district in about three months.

She still attends a mosque in the district and clearly has relationships there — a worker at Al-Sham Sweets & Pastries greeted her warmly as she ordered kenafeh, a Middle Eastern dessert, there this week.

“My family is a working-class family that can’t afford to live in Little Egypt as an Egyptian family,” she said. “Because of gentrification. And this is a story that many working-class ethnic communities understand.”