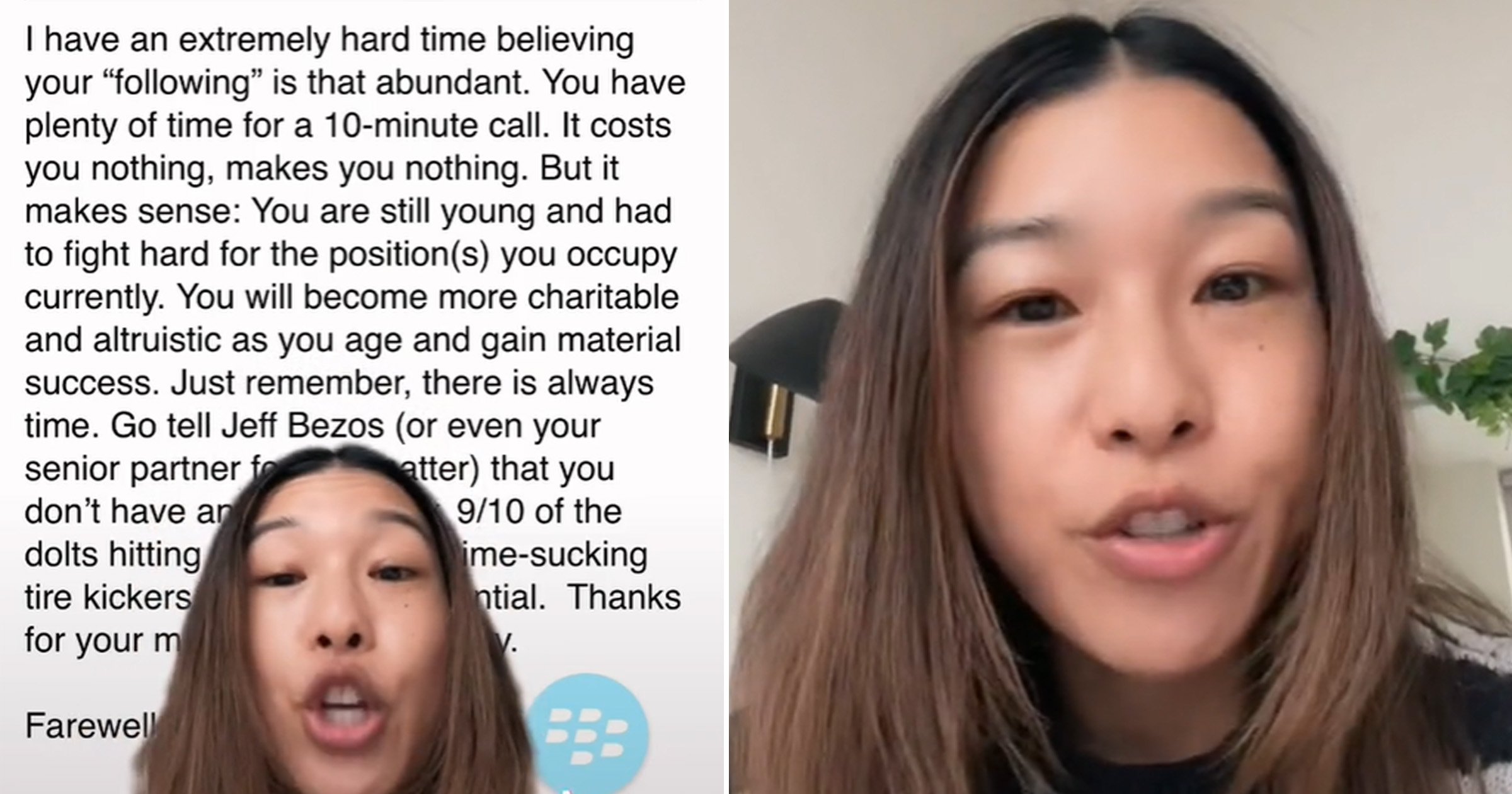 After receiving an ‘unhinged’ email from an entitled undergraduate student, Cece Xie took to TikTok to share with her followers what not to do when trying to network professionally.

The New York City attorney shared the crazed email to her by a male college student in which he lambasted her for declining to take a 10 minute call with him to discuss law school admissions.

Xie shared the message he sent her with her 382,000 TikTok followers as a cautionary tale, and the video has since been viewed over 1.6 million times.

The 30-year-old attorney attended Yale for her undergraduate degree and graduated from Harvard Law School in 2016. She currently works at a corporate firm, while creating content for her TikTok and YouTube accounts, which share hundreds of thousands of followers.

In the viral clip, Xie shares her response to the initial email received from a student she calls ‘Benjamin’ on November 30. In his first message the young student politely asks her to speak with him about law school admissions.

‘I am currently enrolled at [redacted] for undergrad; I have plenty to say (ask rather), but I was wondering if you’d deign to share 10 miniutes with me telephonically to discuss law school admissions (attempting to matriculate into Duke law) and post-graduate opportunities?’ Benjamin asked via email.

Xie responded, thanking him for reaching out. She then shared her general policy, saying she does not do one-on-ones, but if he had a specific question she would be happy to help.

‘I unfortunately don’t have time to have one-on-ones with everyone who reaches out to me, but please check out [website] and my TikTok playlists for answers to some common questions I receive about law school and a legal career,’ Xie wrote in her response.

‘If your question still hasn’t been answered, feel free to submit it to me via the Ask Cece features on my website. Hope this helps, and good luck!” she said.

Xie was then baffled by Benjamin’s response, belittling her for turning down his request by saying he had an ‘extremely hard time believing your “following” is that abundant.

‘You have plenty of time for a 10-minute call,’ Benjamin raged.

‘It costs you nothing, makes you nothing. But it makes sense: You are still young and had to fight hard for the position(s) you occupy currently,’ he wrote. ‘You will become more charitable and altruistic as you age and gain material success.’

‘Just remember, there is always time. Go tell Jeff Bezos (or even your senior partner for that matter) that you don’t have time. Lastly, 9/10 of the dolts hitting you up are just time-sucking tire kickers that have no potential. Thanks for your microaggressive civility,’ the college student added.

The real kicker though, was that Benjamin sent Xie the petty message from an email with his employer’s name listed below.

Xie said she briefly considered emailing the student’s college, Duke Law admissions and the employer listed in his email signature, attributing the thought to her being an Aries.

Instead, Xie held off, and told her followers she decided to take the high road.

‘Law is a small world, and I’ve gotten questions from friends before, looking to hire my former colleagues or acquaintances. And if I’ve had a bad experience with someone, I’m gonna tell the truth,’ Xie said.

‘So, Benjamin, for your sake, I hope our paths never cross again.’