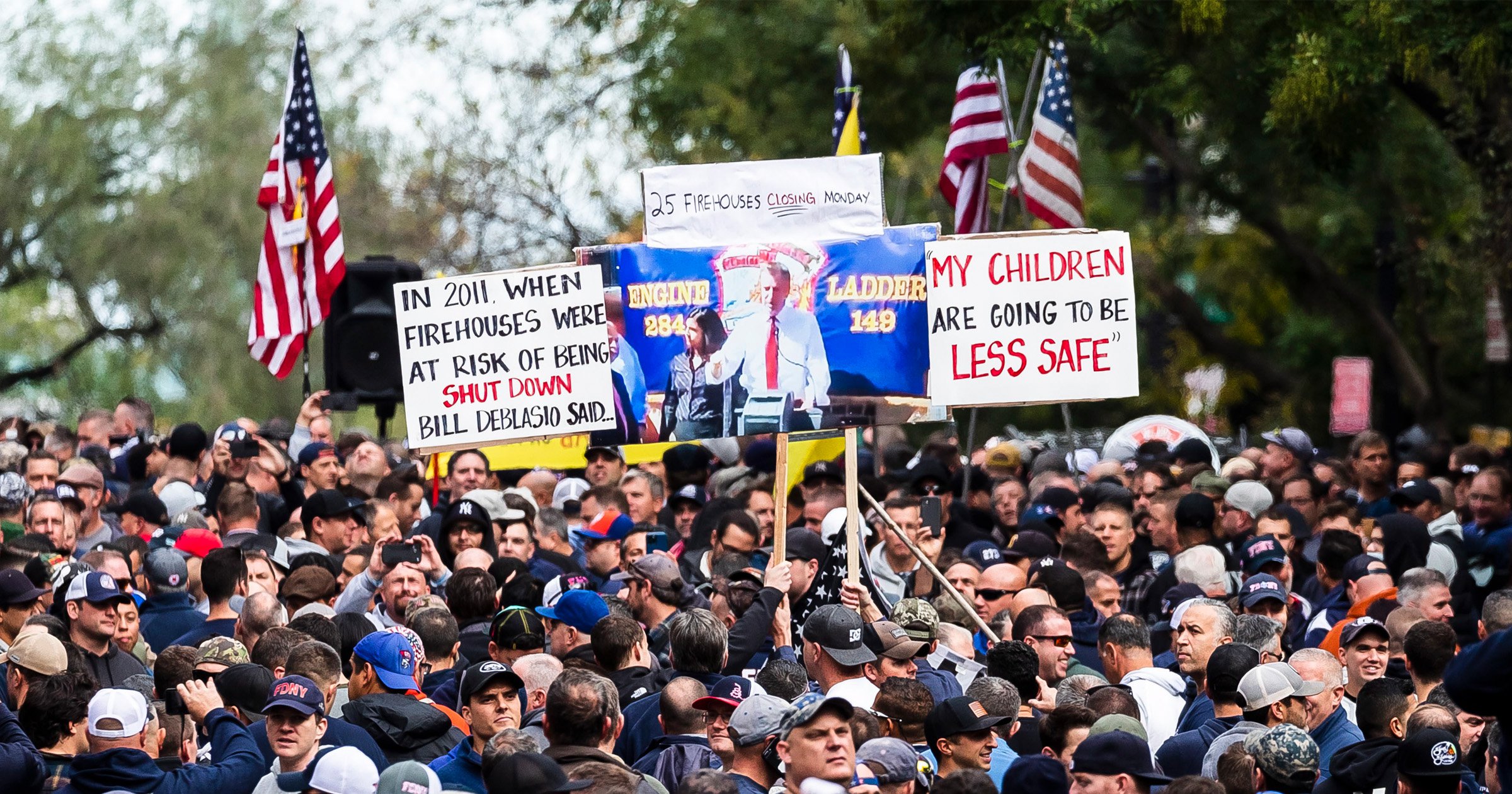 Thousands of New York City workers will be required to show proof they’ve been vaccinated against Covid-19 by 5p.m Friday — or be suspended without pay.

Mayor Bill de Blasio announced the mandate last week, and has recently claimed the city will be prepared for any worker shortage it may see as many police officers, firefighters and sanitation employees remain unvaccinated.

New numbers on Thursday showed a quarter of the affected workforce of approximately 160,000 still hadn’t had their shots, NY1 reported.

‘We have a variety of tools available, mandatory overtime, scheduling changes,’ de Blasio said during his daily briefing. ‘There’s other options they can turn to address the situation.’

The vaccination rate among the New York City Police Department (NYPD), where the virus has killed more than 460 officers, was 80% as of Friday. The department has yet to disclose any contingency plans.

NYPD Police Commissioner Dermot Shea said in a Tweet that over 1,000 first doses of the vaccine were provided to members on Thursday.

‘We expected that a lot of the vaccinations would happen toward the end of the deadline,’ de Blasio said.

While de Blasio is confident the city will be able to handle any staffing shortages, the unions representing these groups of workers warn the mandate could lead to things like closed firehouses and slower response times to emergencies.

The Police Benevolent Association of New York said in a press release that as many as 10,000 officers might not meet the vaccination deadline.

In a video released internally to NYPD officers, Commissioner Shea expressed bewilderment at the level of resistance, and urged members to get vaccinated for the sake of the city.

‘You gotta do it now. To help me, to help the city and keep you and your families and your partners safe from this,’ he said.

The NYPD is also holding a retirement fair for those who would rather quit than get vaccinated. The department expects a big wave of retirements, according to ABC7.

As of Friday, the New York City Fire Department (FDNY) was 71% vaccinated, with 65% of firefighters and 80% of paramedics vaccinated.

The department has warned, after failed negotiations with the city, that even with forced overtime, response times for emergency calls could slow to 15 to 20 minutes, putting lives at risk.

The president of the city’s fire union is urging unvaccinated members to defy de Blasio’s order and come in for work Monday.

‘What happens on November 1 will be on him, I’ll tell my members to go to work, if he sends them home, it’s on him,’ said Uniformed Firefighters Association President Andrew Ansbro.

The order goes against de Blasio’s order, as the mayor continues to insist the vaccination mandate is non-negotiable.

Thousands of firefighters and other city workers protested outside the mayor’s home Wednesday to voice their opposition to the mandate.

The mandate has even slowed garbage pick-up, causing large piles of trash to remain uncollected across the five boroughs this week as complaints spiked.

‘I’m assuming it is related to people expressing their views on this new mandate,’ de Blasio said.

As of Wednesday, about 3,300 sanitation workers, a third of the department’s staff, were still unvaccinated, gothamist reported.

Complaints of uncollected trash and recycling topped out at more than 12,200 in a single day on October 24th, when the previous week there were about 140 complaints a day.

The new mandate comes after a similar requirement for teachers and health care workers led to a surge in vaccinations with about 95% getting the vaccine.

It is also one of the strictest mandates across the country, with San Francisco being one of the few other cities requiring its workforce of 35,000 to be inoculated. Neither city is allowing an option of Covid testing instead of the vaccination.

All workers placed on unpaid leave will be able to return to work as soon as they show proof of a first vaccine dose, the city has said. It’s unclear how long workers will be able to stay on leave before getting fired.

‘We need to reassure all New Yorkers that if you’re working with a public employee, they’re vaccinated,’ de Blasio said when announcing the mandate.