When New York State lawmakers approved emergency legislation this week to ban evictions for at least two months, they were seeking to prevent hundreds of thousands of people from being forced from their homes during the winter, with the pandemic still raging. But they also feared something more perilous: a broader ripping at the fabric of society.

Families become homeless after being evicted, overwhelming shelters. Children haphazardly transfer schools and fall far behind. Lines at food pantries grow. People end up in crowded or other poor conditions, increasing their chances of developing chronic disease. During the outbreak, evictions have been associated with the spread of Covid-19.

And so the threat of eviction and subsequent hardships looms across the region. A school aide in Brooklyn who spent months in a homeless shelter is worried that she will lose her apartment and have to return to a shelter far from the doctors who treat her son’s heart condition.

A 65-year-old immigrant in East Harlem lost his wife to Covid and faces eviction after using his rent money to send her body back to Senegal. Since losing his job stocking groceries, he has bought food with his unemployment benefits.

North of New York City, an unemployed freight dispatcher moved into a mobile-home park, hopeful that her son would get a good education there. But now she is facing eviction, and she worries what that means for his schooling.

For their part, landlords, especially those with only a few properties, are weathering their own crisis, with rental payments drying up but mortgages and utilities still to be paid.

The eviction moratorium will push some of those problems into the spring, when the pandemic is expected to recede as the pace of vaccinations increases. Many eviction proceedings will start up again on May 1, just weeks before the mayoral primary, one of the most consequential elections for New York City in memory.

As a result, the next mayor will have to grapple with the repercussions in a city already beset by widening income inequality and a local economy severely damaged by the pandemic. In New York State overall, as many 1.2 million households are at risk of eviction, according to Stout, a financial services consulting firm.

David R. Jones, president of the Community Service Society of New York, said that even before the pandemic, many New Yorkers were living paycheck to paycheck in unstable housing, spending half of their income on rent. Evictions will severely exacerbate the financial strain, he said.

The crisis, with its convergence of homelessness and joblessness, has the potential to replicate some of the worst elements of the Great Depression, he said.

“And that ripples down immediately,” he said.

Worse, Mr. Jones said, “those kinds of issues for New York could be long term.”

If tenants who are evicted can’t find alternate housing, they often double up in the homes of friends or family, or become homeless. More generally, evictions are associated with a spike in physical and mental health ailments and physical and sexual assault.

“For children, it’s particularly devastating,” said Emily A. Benfer, a visiting law professor at Wake Forest University. “It’s now in multiple studies associated with lead poisoning, it’s linked with severe academic decline at a time when children are falling so far behind, it increases food insecurity and it also derails their adulthood by increasing chronic disease.”

Halima Abdul-Wahhab, 47, has two children, 19 and 3, and feared they would again be homeless when her landlord began eviction proceedings against her. She said her teenage son had a heart condition that makes him more vulnerable to coronavirus, and she wanted to remain close to the doctors who treat him near their Brooklyn apartment.

In December, her family’s eviction — and all-but-certain return to a homeless shelter — was narrowly avoided thanks to the unusual exertions of a nonprofit attorney and the office of her state senator, Zellnor Myrie. But the reprieve may be only temporary.

Ms. Abdul-Wahhab, who works as a school aide, said she is not sure how she would afford a new apartment.

“I’m at a job where I don’t make that much, but I just try to maintain as much as I can,” she said. “Rent is not the only thing that has to be paid every month.”

Since the pandemic hit, food pantries across the country have experienced record demand.

“Because that’s ultimately what folks are doing, all year long, without a pandemic,” he said. “They choose every month: Do I pay rent, do I buy medicine, do I keep the heat on, or do I buy food? Food is the first to get cut.” He added, “Those are impossible choices people have to make all the time — add a pandemic on that, and I don’t know how they do it.”

Nationally, as many as 14 million renter households are considered at risk of eviction. Were those evictions to proceed, the cost to social services would be more than $128.5 billion, according to a recent study by the University of Arizona and the National Low Income Housing Coalition.

States have responded with a patchwork of eviction moratoriums and Covid-19-related hardship exemptions, but no state has fully tackled the issue of rent arrears, according to Professor Benfer. Nor is it clear that any state would be able to, given the fiscal distress that states and local government are experiencing.

New York City has an unusually sturdy social safety net, in part because City Hall has reached court settlements with advocacy groups. That includes a so-called right to shelter.

“The city has an obligation to shelter anyone who is homeless, and it’s expensive: over $3,000 per family, and $2,000 for a single person,” said Judith Goldiner, a Legal Aid Society attorney. “Just that cost alone is huge for the city.”

The same is not necessarily true outside the city, where evictions could upend communities that have fewer rental protections and less assistance, tenant lawyers said.

In Sullivan County, north of New York City, Tiffany Caggiano, 25, lives with her partner and their 5-year-old son in a manufactured home. The owner of the land where the house sits is trying to evict her, and the holder of the mortgage on her home is trying to foreclose on her.

Both she and her partner lost their jobs just before the pandemic and have been unable to find steady work since. They survive on unemployment insurance and food pantries.

Ms. Caggiano said she moved there to get her son into a good school. He will enter kindergarten in the fall.

The boy dreams about a home with an upstairs, but if they were evicted, the county might put them in a hotel or transitional housing, according to their lawyers, because the county does itself operate a homeless shelter. In the end, they could very well be left out in the cold.

“We would be in our car,” Ms. Caggiano said.

Legislators said this week that they had to do something. Brian Kavanagh, a Democratic state senator who represents Lower Manhattan and part of Brooklyn, was the lead sponsor of the bill that bars landlords from evicting most tenants for 60 days in almost all cases.

“A policy that tells people they can’t go to work and therefore they can’t pay their rent, and then allows them to get evicted, and then pays for their shelter is just economically nonsensical, even if you don’t have a heart,” Mr. Kavanagh said.

The recent federal relief bill directed $25 billion in rent relief nationally, including $1.3 billion to New York State, but many experts doubt that will be enough to cover all the back rent that is owed. Both renters and landlords are calling for significantly more.

Many of those facing eviction, including East Harlem resident Diba Gaye, lost jobs during the pandemic. Mr. Gaye’s wife died of the virus on April 11.

He remains in his apartment with his 21-year-old daughter and 18-year-old son, who both work part-time pharmacy jobs. But money remains tight. Mr. Gaye lost his job as a grocery store stocker and has been living on unemployment benefits that help him pay for food. 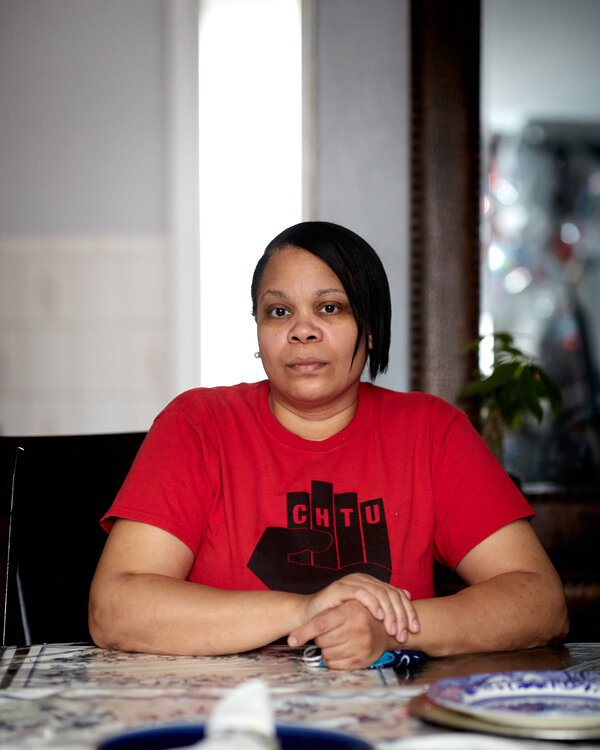 Many landlords don’t want to evict tenants either, said Michael A. Steiner, the lawyer for the landlord who began eviction proceedings against Mr. Gaye.

But with storefront and apartment tenants not paying rent, landlords are getting squeezed from both sides.

Still, some tenants said many landlords did not deserve sympathy, and have fought back with rent strikes.

Tiffany King, an unemployed hotel housekeeper, said she wants landlords to feel the trickle-down effect that comes with eviction.

She hasn’t paid rent in months, part of a rent strike that she and her neighbors are waging to protest lack of hot water, and what she describes as rampant mold.

“What tenants went through, now the landlords are going to have to go through,” Ms. King said. “They’re going to have to stand on line for help, or go into their savings. They don’t think about our health or how we want to live.”