On Saturday just past noon, Leonard Shoulders strolled up to a bus stop in the Belmont neighborhood of the Bronx. A handful of people stood around, waiting for their rides or looking down at their phones — an unremarkable scene.

But then a hole suddenly opened up on the sidewalk and Mr. Shoulders, 33, plunged into it. Stunned bystanders who rushed to the edge of the chasm faced a ghastly sight: Mr. Shoulders had dropped 12 to 15 feet into an underground vault teeming with rats.

“Rats crawling on him, he can’t move,” his brother, Greg White, told CBS New York. “He didn’t want to yell because he was afraid there were going to be rats inside his mouth.”

For about 30 minutes, Mr. Shoulders remained in the vault as firefighters tried to pull him out of the hole. Videos of the scene show him eventually being wheeled away on a stretcher by emergency workers. He suffered injuries to his head and arm, Mr. White said.

On Thursday, Mr. White and other relatives of Mr. Shoulders declined to talk about Mr. Shoulders’s fall, saying that he was considering legal action and directing questions to a lawyer, Nicolas Bagley.

Mr. Bagley did not immediately respond to requests for comment.

Cindy White, Mr. Shoulders’s mother, told NBC New York: “He’s traumatized. He said he went straight down, and he was falling, falling, but the debris was falling and hitting him in the head.”

A spokesman for St. Barnabas Hospital, where Mr. Shoulders was taken on Saturday, said he remained hospitalized on Thursday in stable condition.

The episode brought together two sources of perpetual anxiety for many New York City pedestrians: the general danger posed by malfunctioning infrastructure and the city’s robust rat population.

People have tried poisoning, trapping and even drowning New York City rats. Still, some scientists have said that rats may have become more aggressive during the pandemic.

And it was not the first time a sidewalk collapsed into a vault underneath it, and storage space under sidewalks is common in the city. Since July 2019, the city has received at least 35 reports of sidewalk cave-ins, according to a review of 311 data. 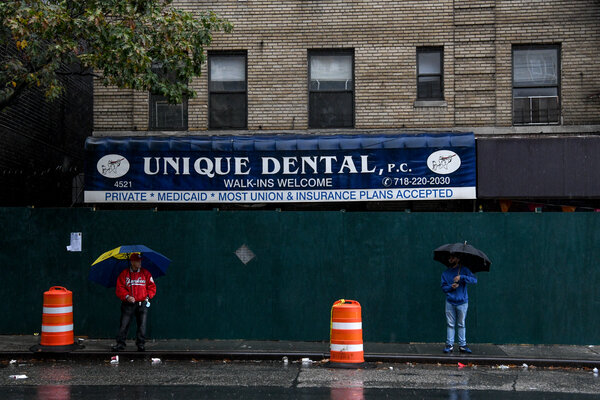 As news of Mr. Shoulders’s plight spread this week, many people on social media found the bizarre and terrifying episode to be an almost poetic representation of the severe hardships posed by the year 2020.

For others, including local community leaders, it was yet another reminder that public officials should do more to improve local infrastructure.

“We need to be inspecting our sidewalks,” said John Sanchez, district manager for Community Board 6 in the Bronx, who lives close to the bus stop where Mr. Shoulders fell. “What happened was unacceptable.”

Andrew Rudansky, a spokesman for the Department of Buildings, said inspectors found that a portion of the sidewalk had collapsed into a vault below, which was “in a state of disrepair.”

He said inspectors were trying to figure out who owned the vault to determine who should be legally responsible for its maintenance.

The vault was next to a five-story building at the corner of Third Avenue and 183rd Street in Belmont. The building was mostly empty except for a dentist’s office on the ground floor.

Mr. Rudansky said the department ordered the building be vacated after the incident because of the danger posed by the sidewalk.

The department also ordered the building owner to set up a fence around the area and to hire an engineer to determine the stability of the vault, he said.

The company listed on city records as the owner of the building, Eh & Hd 183rd Realty, did not respond to requests for comment.

Mr. Shoulders’s brother, Mr. White, said the family was still stunned by what happened to him, but relieved he was recovering.

“It was like a one out of million chance of that happening,” Mr. White told CBS New York. “I was shocked. I was surprised. But you know, he’s breathing.”