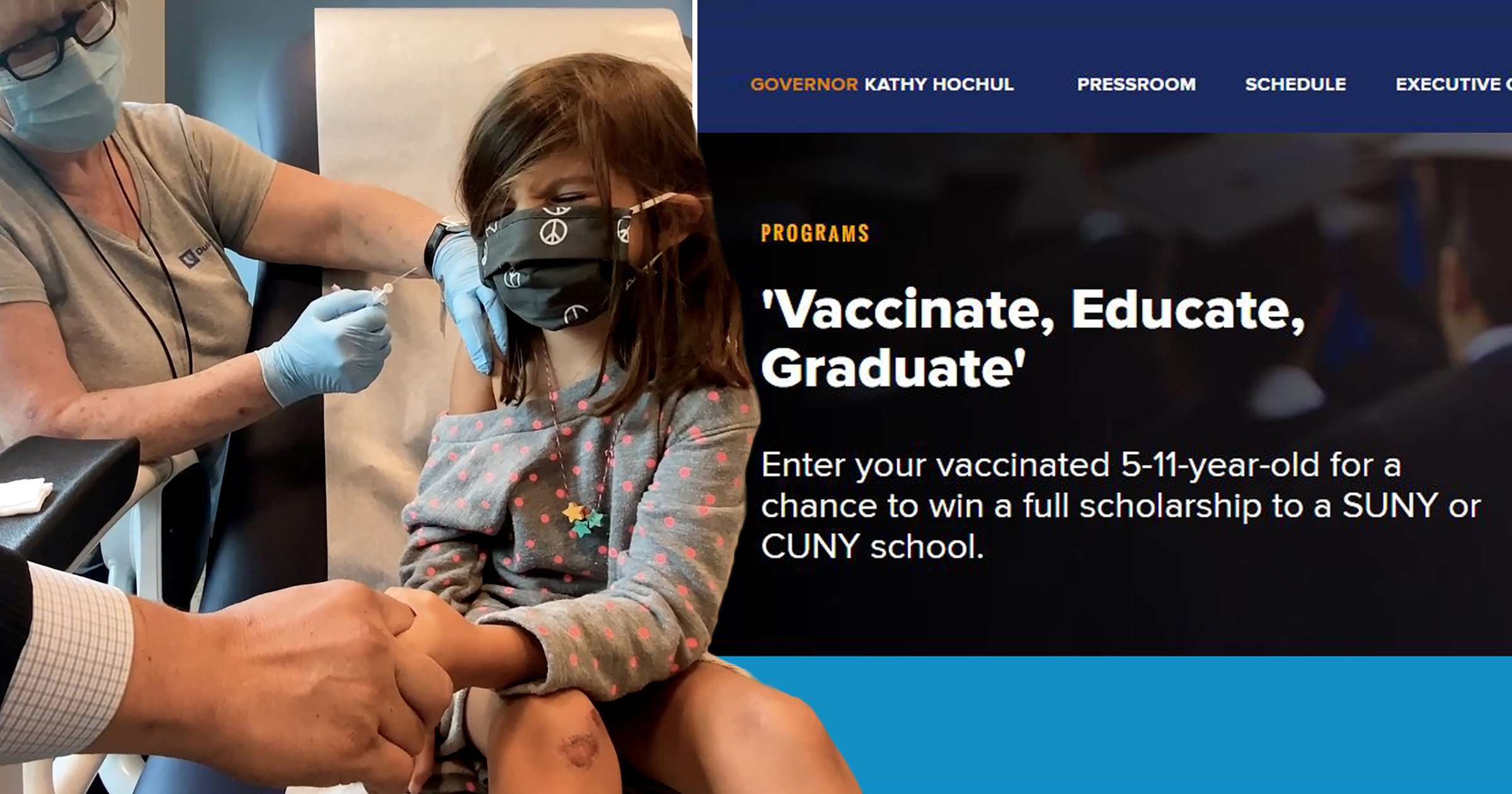 Nearly one million American children ages five to 11 have gotten their first coronavirus shot – and New York officials are looking to up that number by offering vaccinated kids a chance to win a full-ride scholarship to college.

The Biden administration on Wednesday announced that about 900,000 children ages five to 11 received their first shot during the first week that they became eligible. An additional 700,000 children have appointments for their first dose, said White House Covid-19 response coordinator Jeff Zients in a press briefing.

As hundreds of thousands of children nationally roll up their sleeves for their Covid-19 vaccine, New York Governor Kathy Hochul announced the new Vaccinate, Educate, Graduate program for students in the state.

A total of 50 vaccinated children will be selected – 10 per week over the next five weeks. Each winner will receive a full-ride scholarship to any two- or four-year New York State public college or university.

‘Tuition, fees, room and board – the whole nine yards,’ the governor said when announcing the incentive at a Covid-19 briefing at the Mount Vernon Neighborhood Health Center in Westchester County, a suburb of Manhattan.

‘So if one of your children wins this, you should probably take them to Disney World because that’ll be a good thing. You’ll have extra money now – you don’t have to be saving for college,’ Hochul said.

‘There’s no excuse not to get the adults vaccinated, get the kids vaccinated, and put this pandemic in the rear view mirror. We’ll talk about it in the past tense and not the current tense,’ Hochul said.

It is unclear if de Blasio will pass the mandate before his last term is up on January 2 and Mayor-elect Eric Adams takes office.

While risk for serious illness for children five to 11 years old is low, about 8,300 kids in that age group have been hospitalized and nearly 100 have died from the virus.

Centers for Disease Control and Prevention (CDC) officials calculated that for every 500,000 kids in the age group vaccinated, between 18,000 and 58,000 Covid-19 cases would be prevented, as well as preventing 80 to 226 hospitalizations.

The debate on whether to mandate the vaccine for young children in New York City comes after the city of San Francisco implemented such a ruling last week.

San Francisco is giving children roughly two months to get vaccinated before they will be required to show proof of their vaccination at indoor venues like restaurants and gyms, the city’s health officer Susan Philp said.