During a recent forum on education, a moderator asked the crowded field of Democrats running to be New York City’s next mayor a question they may not have wanted to answer: How would they approach the fraught issue of admissions into the city’s selective schools, where Black and Latino students are starkly underrepresented?

A few of the candidates’ eyes widened when they heard the prompt, and some avoided furnishing a direct answer, resorting instead to vague language.

“There are a lot of things we need to do in this direction,” said Andrew Yang, the former presidential candidate. Raymond J. McGuire, a Wall Street executive, noted that the issue had “historic significance.”

Those halting responses illustrate just how incendiary school integration still is in this proudly liberal city. But with the Democratic primary just five months away, the candidates have little choice but to confront school segregation, which has divided New Yorkers for a half-century.

An influential activist movement led by city students is accelerating pressure on the candidates to make clear how integration would fit into their plans to reshape New York’s public school system, the nation’s largest. And a national reckoning over racism has forced the candidates to square the city’s self-image as a progressive bastion with its unequal school system.

During the last few weeks alone, the candidates have been asked about their positions on radio and television interviews, in multiple forums, and in a series of New York Times interviews. Together, their responses revealed sharp differences in how they are approaching some of the most contentious integration policies.

New York City is home to one of the most segregated school systems in America, in part because of the city’s labyrinth admissions process for selective schools. Housing segregation and school zone lines have produced a divided school system that has been compounded by competitive admissions that separate students by race and class as early as kindergarten.

Mayor Bill de Blasio recently announced a sweeping set of changes to how hundreds of racially segregated selective schools admit their students — but left most of the details up to the next administration.

Some of the mayoral hopefuls are in favor of addressing the extreme underrepresentation of Black and Latino students in selective schools by overhauling gifted and talented programs and changing admissions for competitive middle schools and elite high schools.

Others are offering less sweeping approaches. And several candidates declined to say anything definitive about those proposals, or said they would mostly maintain the existing system. 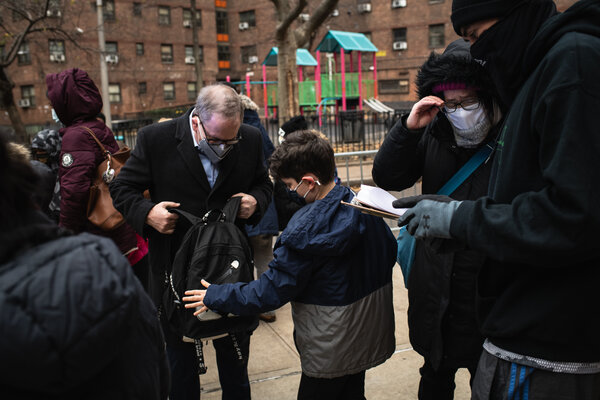 The most progressive candidates, including Scott M. Stringer, the city comptroller, and Dianne Morales, a former nonprofit executive, are hoping to differentiate themselves from the pack by declaring their intentions to push potentially disruptive change that could spur integration.

There are subtle differences even within that lane: Maya Wiley, a former de Blasio administration official who has been a leading figure in the pro-integration movement, sometimes gave conspicuously broad answers to direct questions about the policies she would implement as mayor. Mr. Stringer, who had assiduously avoided integration debates even in his own neighborhood, has recently moved to the left along with his party.

Shaun Donovan, the former secretary of housing and urban development in the Obama administration, has released the most detailed education policy plan so far, saying he would eliminate most academic prerequisites for middle school admissions and add weighted lotteries to further integrate those schools.

More centrist hopefuls like Mr. McGuire, Eric Adams, the Brooklyn borough president, and Kathryn Garcia, a former sanitation commissioner, all promised to expand selective programs and schools, rather than fundamentally change them. That position is shared by Mr. Yang, the former head of a test preparation company, who declined an interview.

Some education experts believe that desegregation is one of the few remaining levers available for improving academic outcomes for the city’s vulnerable students, many of whom have had little choice but to enroll in low-performing schools.

“The plainest way to think of integration is that it is a proven and effective school improvement strategy,” said Matt Gonzales, the director of the Integration and Innovation Initiative at New York University’s Metro Center.

Decades of research supports that view — not because there is alchemy found in diverse classrooms, but because integration redistributes resources, funding and power across schools. Mr. Gonzales said the candidates’ positions on this issue are not merely a signal of their progressive bona fides, but an essential way of understanding their approach to education.

Mr. de Blasio’s education agenda has largely not included desegregation measures, and he has left major decisions related to integration to the next mayor.

He has largely ignored a recommendation, made by a school integration group he convened, that the city should replace gifted and talented programs with magnet schools and enrichment programs. The next administration will likely have to respond.

Mr. de Blasio said this month that he would soon scrap the current gifted exam given to 4-year-olds against the advice of many experts, though the city’s educational panel may force him to end the test immediately. But most of the candidates had already committed to changing that test, and will now have to determine whether to alter the program itself.

And last month, Mr. de Blasio paused the use of academic prerequisites for middle school admissions for at least a year because of the pandemic. That will leave it up to the next mayor to decide whether to make that policy permanent — or end it.

Ms. Wiley, who helped craft that proposal as a leader of the mayor’s integration group, said she would end middle school screening, as did Ms. Morales.

Some candidates tried to find a middle ground: Mr. Stringer and Mr. McGuire said they would consider this year a pilot program, and make a permanent decision next year. Ms. Garcia said she would look at changes on a district-by-district basis, and Mr. Yang expressed skepticism about eliminating middle school screening during a recent forum.

Gifted education is a third-rail issue because the programs have long been seen as a way to keep white families in public schools, and have been embraced by some middle-class families of color as alternatives to low-performing neighborhood schools.

But some experts have argued that gifted schools have created a two-tiered system that caters to families with the resources to navigate it. Roughly 75 percent of students in gifted classes are white or Asian-American.

Mr. Stringer said that his own children, who are in gifted programs, had benefited from a flawed system because of their parents’ privilege. “I recognize as a parent, I’m going to do everything I can to do the best for my kid,” he said. “But as mayor, I have to do what’s best for every child.”

Mr. Yang offered a starkly different message in a recent forum, arguing that some parents would flee the city without gifted classes. “Families are looking up and saying, ‘Is New York where my kids are going to flourish?’”

Mr. Adams and Ms. Garcia said they would create more gifted classes in low-income neighborhoods, the favored policy position of many supporters of gifted programs. Activists have said that expanding gifted would only contribute to an inherently unfair system. Mr. McGuire said he would not “dismantle the programs, but I’d take a close look to make sure it’s fair and achieving its purpose.”

Some candidates seemed eager to please all sides on the contentious if narrow issue of the entry exam for eight elite high schools, which is partially controlled by the State Legislature.

In 2018, Mr. de Blasio started a campaign to eliminate the test. His effort failed after many low-income Asian-American families, whose children are overrepresented in the schools, mounted a massive effort to oppose the city’s plan.

Mr. Adams’ record on the issue demonstrates why so many politicians have tried to avoid staking out a position on the test.

The borough president had long opposed the exam, and compared the specialized schools to “a Jim Crow school system.” But just a few weeks after he appeared at a news conference to trumpet the mayor’s plan, Mr. Adams reversed course, following an outcry from Asian-American campaign donors. Mr. Adams confirmed in a statement that he would keep the exam in place.

Ms. Wiley has been a consistent critic of the exam, which she called discriminatory, but did not say exactly how she would approach the issue as mayor. Ms. Morales, Mr. Stringer and Brooklyn City Councilman Carlos Menchaca said that they would eliminate the exam.

Ms. Morales graduated from Stuyvesant High School in the 1980s, and has watched with despair as the number of Black and Latino students at the school has dwindled. She said that going through the admissions process with her own children felt like an “obstacle course of barriers, targeted toward the people who are best positioned to overcome them.”

Ms. Garcia, Mr. McGuire, Mr. Adams and Mr. Yang have said they would keep the exam in place, but promised to build additional specialized schools. That strategy was already tried by former Mayor Michael R. Bloomberg, but has not led to greater diversity. The candidates have mostly not provided specifics for how their approach would differ.

That came as no surprise to Christina Greer, a professor of political science at Fordham University, who expects the candidates to remain vague to avoid offending voters.

“A lot of liberals like integration in theory, as long as it doesn't touch their children at all,” she said. “For a lot of politicians, integration is a no-win.”