The expansion of the Javits Center is almost complete, but the pandemic has kept it from hosting events for more than a year.

New York has just spent $1.5 billion to entice very large groups of people to gather under the same roof. When will that seem like a good idea again?

Construction crews are putting the finishing touches on a major expansion of New York City’s main convention hall, the Javits Center. By early summer, it should be ready again to host trade shows, corporate meetings and public events.

But the pandemic wiped out mass gatherings more than a year ago, and it is not clear when or if most of them will return. The Centers for Disease Control and Prevention is still warning people to “avoid large events and gatherings.”

New York is expanding the Javits Center “just in time to see the absolute collapse of the convention and trade show business,” said Heywood Sanders, a professor at the University of Texas at San Antonio who studies the convention business.

The biggest annual events at the Javits Center, including the New York International Auto Show, Comic Con and trade shows like Toy Fair, have been canceled over the last 13 months. Some, like Book Expo, an annual gathering of publishers and booksellers, have been shelved for good.

The Javits expansion, funded primarily by a $1 billion allocation in the state budget backed by Gov. Andrew M. Cuomo, was intended to make New York more competitive in the escalating competition for trade shows and the crowds they attract.

Several other cities, including Las Vegas, Seattle and San Francisco, have invested billions of dollars in the last several years to make their convention halls bigger and more appealing.

Then the pandemic struck. 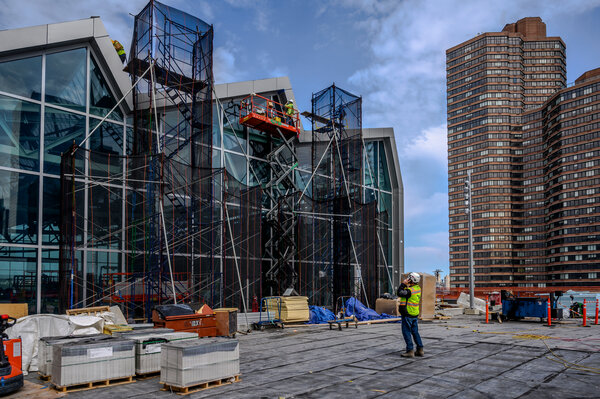 When the outbreak brought nonessential travel to a halt, Orlando, Fla., suspended the latest expansion of its convention center, which already was more than twice the size of the Javits facility.

Many big convention centers remain closed, though in some states, including Florida, Georgia and Texas, they are hosting events again, said Brad Mayne, chief executive of the International Association of Venue Managers.