For years, Mr. Cuomo resisted such a move, arguing that raising taxes, especially on the wealthy, would drive business out of state. But the coronavirus-related revenue shortfalls — combined with the growing strength of the Legislature’s progressive wing and the governor’s waning influence — created sudden momentum.

If enacted, the deal would raise income and corporate taxes to generate an extra $4.3 billion a year and would potentially legalize mobile sports betting to raise an additional $500 million in new tax revenue.

The personal income tax rate would increase to 9.65 percent from 8.82 percent for individuals making over $1 million and for joint filers making more than $2 million.

The question of who should pay to help revive the country, still recovering from the pandemic’s devastation of the economy, is percolating across the nation. In Washington, President Biden has proposed 15 years of substantial increases in corporate taxes to help pay for an eight-year, $2 trillion package of infrastructure spending.

The president is also expected to propose tax increases on high-earning individuals, a maneuver that many states are also weighing. Lawmakers in California are considering a wealth tax, while Minnesota’s governor has proposed a new top income tax rate in the state. In Washington State, the State Senate last month narrowly approved a new 7 percent tax on capital gains of more than $250,000, which Gov. Jay Inslee, a Democrat, has said he supports.

Raising taxes on the rich in New York has been a top policy priority of the Democratic Party’s left flank, but Mr. Cuomo, a third-term Democrat who is a fiscal centrist, had long opposed the move. Now, the governor’s influence over the budget — as well as other matters in Albany — may be weakening amid various investigations into sexual harassment allegations and his handling of virus-related deaths involving the state’s nursing homes.

Mr. Cuomo was in the awkward position of negotiating with Democratic leaders whose full support he has lost: Andrea Stewart-Cousins, the majority leader in the State Senate, has called on him to resign, while Carl E. Heastie, the speaker of the Assembly, has opened an impeachment investigation into the governor.

Democrats, who control the Legislature, entered this year’s negotiations emboldened by the governor’s loss of power, eager to leverage the worst political crisis of Mr. Cuomo’s decade-long tenure to pass a bevy of progressive priorities. Democrats also have veto-proof supermajorities in both houses, increasing their clout.

Nothing in Albany is ever final until the bills are printed, passed and signed, with last-minute lobbying efforts and political jockeying always threatening to create snags that could unravel or delay a deal. Still, Democratic lawmakers appeared on track to achieve many of their objectives.

The budget deal could pave the way for a casino in New York City, an idea long floated as a possible boon for the state’s tax revenues. Developers have salivated at the potential market in a city of nine million which once drew more than 50 million visitors a year. Language being circulated among lawmakers would allow the state to issue three full-scale casino licenses, almost certainly to be granted in the city and the suburbs, accelerating an expansion that had been scheduled to begin in 2023.

Other aspects of the budget, which was due on April 1, are still being negotiated, and could provide significant relief for New Yorkers still struggling from the fallout of the coronavirus pandemic, from assistance for small businesses to money for tenants late on rent and cash payments for undocumented immigrants who did not qualify for federal stimulus checks.

Indeed, this year’s budget negotiations — like last year’s — were overshadowed by the pandemic, with many lawmakers working from home and most of the deals being formulated via video meetings even as the state reckoned with financial challenges related to the pandemic.

Even so, there appeared to be an agreement to vastly increase education spending and implement a recovery grant program for small businesses that suffered losses during the pandemic. Much of the increase in spending would be paid for by increasing taxes on the rich.

The corporate franchise tax rate would also increase to 7.25 percent from 6.5 percent, but it is supposed to remain unchanged for small businesses. The proposed tax rate increases were reported in The Wall Street Journal.

For months, a statewide coalition of activists pushed for a slew of new taxes on the superrich, a top priority for the ascendant progressive wing in Albany. The activists pushed back against migration fears and framed higher taxes as essential to help support needy New Yorkers, especially after the pandemic.

“Thanks to thousands of New Yorkers who took to the streets and the ballot box, tireless advocates and grass-roots organizers, and the new Democratic legislative power in Albany, we are beginning to transform New York from a state that protects the wealthy to a state that delivers for the many,” said Rebecca Bailin, campaign manager for the Invest In Our New York Coalition, which includes unions, the Working Families Party and the Democratic Socialists of America.

Democrats in the Legislature had initially looked to raise more than $7 billion in new revenue, mostly through even higher tax increases on the rich, but the urgency to raise taxes diminished after Congress approved a stimulus package that gave the state $12.6 billion in direct aid. It was a huge one-time windfall supposed to help cover most of the $15 billion budget gap over the next two years, bailing out the state after the pandemic decimated tax revenues.

The business community has warned that raising income taxes could prompt millionaires who have left the state during the pandemic and are working remotely to make their move permanent, damaging the state’s tax base. Currently, the top 2 percent of the state’s highest earners pay about half of the state’s income taxes.

Andrew Rein, the president of the Citizens Budget Commission, a fiscal watchdog, said the state had $22 billion more available over the next two years than officials anticipated in January, and called the proposed tax increases “unnecessary and economically risky” at a time when the economic recovery is fragile.

Still being discussed is a $2.1 billion “excluded workers fund” for New Yorkers who did not qualify to receive federal stimulus checks and unemployment benefits during the pandemic for certain reasons, such as their immigration status. The fund would provide retroactive cash payments to those people, primarily undocumented workers who lost their jobs and people recently released from prisons. 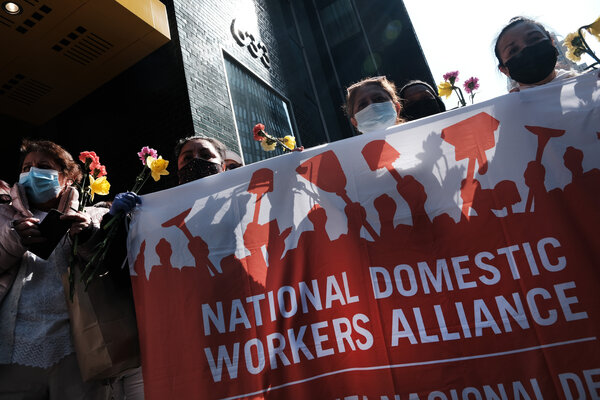 Lawmakers have agreed on an extensive rent relief program to help vulnerable tenants who owe rent, an effort meant to aid not only renters who experienced financial hardship because of the pandemic and are at risk of eviction, but struggling landlords, too.

The program would help certain renters cover up to 12 months of money owed on rent and utilities, as well as three months of future rent. Tenants would be eligible, regardless of immigration status, if they meet certain benchmarks of financial hardship, such as being eligible for unemployment, or if they are considered low-income. Priority would also be given to veterans, domestic violence victims, small landlords and people facing eviction proceedings.

Much of the program will be funded by $2.3 billion in aid from the federal government, but the distribution of that relief largely depends on how the state sets up the program. Democratic lawmakers and tenant groups were particularly concerned that many tenants could be shut out if the application process was too complex or proving eligibility was too onerous.

Indeed, the state’s last rent relief program rejected many tenants and only distributed half of its $100 million allotment, largely because of confusing and strict requirements. Between 800,000 and 1.2 million households across the state are thought to be late on rent.