(Want to get New York Today by email? Here’s the sign-up.)

Weather: Rain, mostly this morning, with a high of 51, then gradual clearing. Tomorrow the sun returns.

Nice to meet you: My name is Azi (pronounced AH-zee). I used to report for The Queens Tribune, The New York Observer, WNYC and Politico before joining The Times last month as the reporter for new New York Today.

What we know: Amazon will announce today its plans to open a headquarters in Queens, which could eventually bring as many as 25,000 jobs to the city.

Catch up: Both Governor Cuomo and Mayor de Blasio are pushing for the deal. Local lawmakers are hesitant to give Amazon tax breaks to move here.

My colleagues have reported that an influx of Amazon employees into the area could be problematic for Long Island City, and the job boost won’t make or break New York’s economy.

The politics: Alliances are shifting. My colleague David Goodman obtained a letter sent last year to Amazon’s C.E.O., Jeff Bezos, that was signed by six politicians and shows that a local councilman, Jimmy Van Bramer, and a state senator, Michael Gianaris, who represent the area and have recently been critical of the deal, were originally supportive.

“We write to you today because we know that Long Island City would be the perfect location for Amazon,” the letter reads.

Asked about the letter, Mr. Gianaris said nothing about his position had changed since last October.

“My feeling is the letter is completely consistent with my current position,” he said. “I welcome the jobs if it means Amazon investment in L.I.C. infrastructure, without us having to pay a ransom for them to be here.”

Mr. Van Bramer also said he stood by his position, stated in the letter, and his current opposition to the likely Amazon deal.

“At no time were any of us told that Amazon would receive a billion-dollar package of subsidies and tax breaks,” Mr. Van Bramer said Monday. “And I never would have signed on to a process that seeks to evade meaningful and binding review by community and elected officials. Everything has changed since we allowed our names on that letter.”

Why it matters: Some of Amazon’s potential neighbors in Long Island City will be residents of Queensbridge, the country’s largest housing project.

The contrast would be a national symbol of “the social and economic tensions coursing through American society — a widening income gap, a lack of access to high-paying jobs for many minorities and a technology sector struggling to diversify,” writes The Times’s Corey Kilgannon.

2. Life and fear in a crowded city

A subway platform, a hurried passenger, a push, then a tumble and ultimately a death.

My colleague Ashley Southall reported on the death of 89-year-old Kurt Salzinger, a behavioral psychologist who had fled Austria after the Nazi invasion. Mr. Salzinger died after he was pushed by a passer-by on a subway platform at Penn Station.

I asked Emma Fitzsimmons, The Times’s transit reporter, what the Metropolitan Transportation Authority is doing to prevent these types of accidents. She notes:

1) The M.T.A. has deployed workers, known as platform controllers, at busy stations to help direct traffic.

2) The M.T.A. has considered installing glass walls, known as platform screen doors, at busy stations to prevent people and objects from falling onto the tracks.

Scoop: Ronnie Lowenstein, the director of the Independent Budget Office, said in an interview that she will retire when her current term ends on July 31, 2022. She was appointed director on Aug. 13, 2000.

While the mayor has an Office of Management and Budget that crunches numbers on revenue and expenses and provides estimates to make policy, the I.B.O. does similar work independently.

The reason: To spend more time with her three grandchildren and to have more leisure time. “Being at the Met at 3 o’clock in the afternoon when there aren’t thousands of people crowding in front of you is just a wonderful experience,” said Ms. Lowenstein, 67.

The work: Ms. Lowenstein, who has a Ph.D. in economics from Columbia, translates budgets into easy-to-understand numbers. In 2004, her agency calculated that a latte tax would generate $12 million for the city.

Picking a replacement: An advisory board will make a recommendation to a four-person panel that’s appointed by the city comptroller, public advocate and the borough presidents. 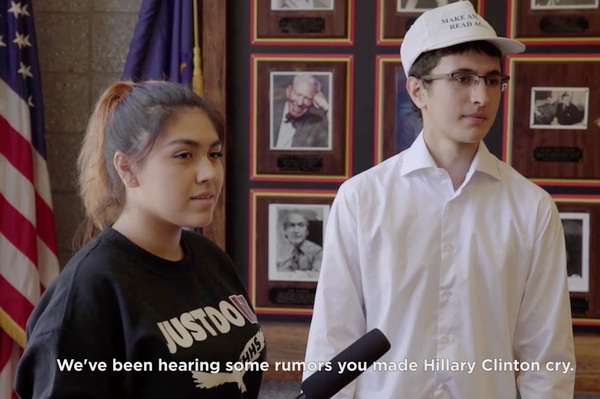 Name-calling. Harassment. Hidden emails. Made-up facts. The 2016 election was, in a sense, childish. Thankfully, a school in Queens let students in on the action.

In “The Candidates,” Townsend Harris High School seniors play real candidates, and vie for the votes of underclassmen.

We all know how the real voting went in 2016. I won’t reveal how Student Trump, Student Clinton and Student Stein did in their election.

The film debuted last weekend at the Tribeca Film Festival. Tuesday’s showing at the IFC Center (at 3 p.m.) is the last of this run.

5. What else is happening

A pink tax? A study on the so-called "Pink Tax" by New York University’s Rudin Center for Transportation found that women spend an average of $25 to $50 more per month than men for safer transportation in the city. But a closer examination shows the participants did not accurately represent New York’s demographics. [Wired]

Advocating no advocate: On Monday, New York Today wrote about the upcoming election to fill the soon-to-be vacant position of the city’s public advocate. On Tuesday, a group of City Council members advocated eliminating the position. “They don’t do nothing,” Councilman Rubén Díaz Sr. told Politico.

Espinal joins the fray: Councilman Rafael Espinal says that he, too, is running for public advocate. [New York Times]

Once homeless, now facing eviction: As many as 100 formerly homeless families at a site near Prospect Park in Brooklyn face eviction after a judge ruled that their apartments are not rent stabilized. [Patch]

Stan Lee, 1922-2018: And Stan Lee, who was born in Manhattan as Stanley Martin Lieber and became a writer and editor for Marvel Comics who helped create some of the most celebrated comic heroes, died at age 95. [New York Times]

6. We heard you. Metropolitan Diary is back.

Many readers wrote on Monday to say that New York Today should continue highlighting Metropolitan Diary, so we’re going to keep it as a feature.

Unable to find our marriage license, I’ve taken the train from rural Columbia County to Lower Manhattan to verify a marriage made 45 years ago. Social Security requires it for survivor benefits.

The Office of the City Clerk hides the bustle of life inside. “Enter through the glass doors,” a sign says. Brides in white gowns or bright dresses light the rainy December day. Couples, some with children in strollers, surround me as they pose for photos. A white-haired woman in jeans and fleece catches my eye. Has she too lost her husband? We all file in together.

Down a long corridor, fresh roses and orchids await buyers. The Records Room opens like a cave. I take a seat. Overhead, my number appears: B073. The clerk’s diamond engagement ring flashes as she hands me the marriage license.

Time shifts. Our third-floor walk-up at 57 Charles Street comes alive like a well-lit stage set: makeshift kitchen, gray walls, a sleeping alcove off the living room and a skylight over the bathtub.

We cooked on a hot plate. I was taken aback by Jerry’s fondness for canned ham; he was appalled by my occasional dinner of cold cereal. On Saturday evenings, we picked up the paper at Sheridan Square. On Sundays, we watched “Elizabeth R” on “Masterpiece Theater” on Jerry’s old TV, cuddling on an orange couch that cranked into a recliner. Three tall windows framed our beginnings.

A sign directs me toward the end of the corridor: “Do not exit through the entrance.”

Newly wed to widow. No, I won’t be leaving the way I entered.

I exit down the steps to Worth Street.

7. Looking for things to do?

Check out the going-out guides from The Times’s culture pages.

8. We want to hear from you

The New York Times is compiling the best things to see and do in New York, and we want to hear from readers about the spaces they love — starting with Harlem and SoHo.

Where are the restaurants or bars you like best? Tell us about the museum, park or store you frequent. How about a favorite quiet spot or street for strolling? Tell us why others would enjoy these places as much as you do.

These forms will accept submissions until Saturday, Dec. 1, at 5 p.m. Eastern:

New York Today is published weekdays at 6 a.m. Sign up here to get it by email. You can also find it at nytoday.com.