Earlier this spring, a party raged on the third floor of Showfields, an experiential retail store in Manhattan. To get there guests rode in an elevator lined with gold tinsel and a mirror.

On the third floor were about 20 masked people, dressed in neon shirts and sparkly pants, grooving on roller skates, some of which lit up as they moved. Under a disco ball, a D.J. played hip-hop while skaters spun in circles and got lost in the music.

“Oh, my gosh, it was great,” said Lionel Laurent, 45, a skating instructor who before the pandemic made money by performing in Times Square. “Clubs are not open, so we are doing this.”

Roller-skating is in vogue these days, but longtime New Yorkers have seen it all before; during the second half of the 20th century, skaters would dance all day in city parks and party all night in New York’s multitude of indoor rinks.

“The Roxy, it was fabulous, especially in the ’80s,” said Bob Nichols, 74, of Manhattan, a retired film editor, reminiscing about the famous rink and club in Manhattan’s Chelsea neighborhood. “People would dress up in skating clothes, these outfits that looked like they belonged to trapeze artists. You just had to stay away from the people drinking. When they fell they would try to hold onto you.”

Cynthia Brown, 64, a retiree who now lives in the Bronx, frequented the Empire Roller-Skating Center in Crown Heights, Brooklyn. “We used to love dancing to Stevie Wonder back in the day,” she said. “It was the perfect beat; you just flowed with the music.”

In 1980 — the height of roller disco — there were indoor rinks across New York City, according to Mr. Nichols, who is president of the Central Park Dance Skaters Association and who also skated at the Metropolis on West 55th Street and High Rollers on West 57th Street. His group, which dates back to 1978, meets at the skate circle near the bandshell in Central Park.

A friend of his recalled other rinks from the era, including Sweet Ruby’s, Roll-A-Place, Park Circle and Empire Rollerdrome, all in Brooklyn, as well as Skate Key in the Bronx.

Now, old-school skaters can only recall one that’s still around: RollerJam USA, in Tottenville, Staten Island. “They couldn’t last in New York City real estate,” Mr. Laurent said. “A skating rink is just a big warehouse with a wood floor.” 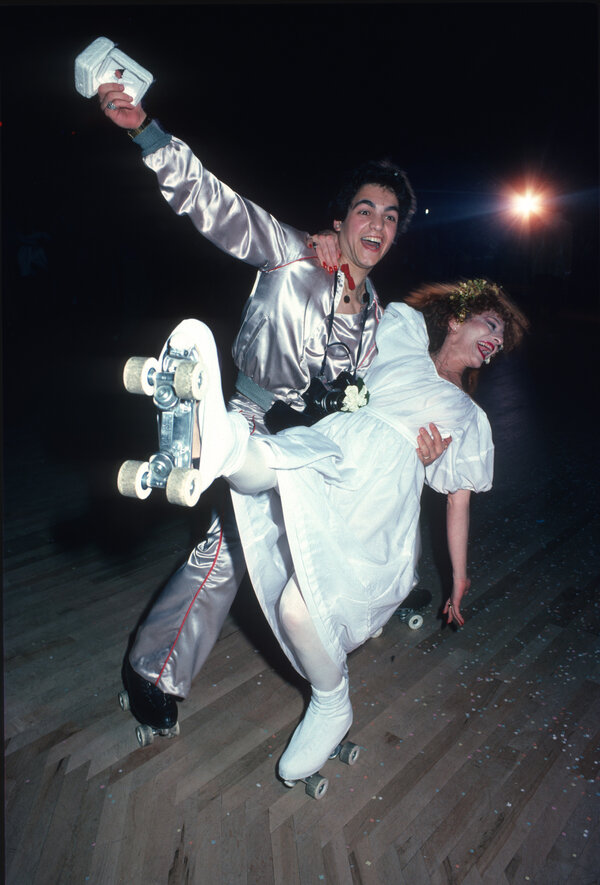 These days the rinks might be gone, but that hasn’t stopped roller-skating — an acknowledged pandemic trend at this point — from taking place in playgrounds, basketball courts, boardwalks and stores. Some pop-up events, like the one at Showfields, are elaborate, with D.J.s, entry fees and special event permits. Lola Star’s Dreamland Roller Disco evenings are back at Lakeside in Prospect Park in Brooklyn with a full schedule for the summer. But dozens of other events are just people getting together, laced up and ready to roll.

The first weekend in May, for example, there were skate parties in a park on the Lower East Side, a high school in Canarsie, on the pavement of Governors Island and near the bandshell in Central Park.

“You have this grass-roots thing going on,” said Arnav Shah, an instructor known as “Sonic” who opened the roller-skating store KE Skate in Woodside, Queens, during the pandemic. “People who want to skate are organizing things and finding spaces to do them.”

Jocelyn Marie Goode, an artist and the organizer of the Showfields pop-up, put on skates after a hiatus of several years for a masked and socially distant roller party at a Queens nightclub in late 2020. “It was the first time I had seen joy all year,” she said. “These people were happy, and it was Black people being happy.”

This inspired Ms. Goode, 39, to research the intersection of roller-skating and Black culture. Three months later, she created the African-American Roller-Skate Museum, which stages pop-up events around the city. Her first big program, N.Y.C. RollerSkate Week, took place for a week in April. More than 500 people signed up.

During one session, families decorated their skates in sequins and rhinestones. Others listened to a talk about how roller-skating played an integral part in the civil rights movement. “Roller-skating was encouraged among veterans to manage their PTSD after World War II, but there was a lot of segregation, and African Americans weren’t permitted to enter roller skating rinks,” Ms. Goode said. “Rinks were one of the first places you saw protests taking place.”

Indeed, roller skaters joined Black Lives Matter protests last summer. Mekaelia Davis, who works at a foundation and lives in Flatbush, Brooklyn, was among them. During the pandemic she had become obsessed with watching roller skating videos on social media; she bought her own pair last June. One month later, she found herself rolling across the Williamsburg Bridge as part of a protest. “This was my second time on skates, and I probably shouldn’t have been out there,” she said. “People skated with me the whole time and encouraged me.”

Ms. Davis, 39, now has her own meet-up for female beginners. Once a week, about seven to 15 women get together in parks and empty parking lots. Pamela Kouakam, 38, who lives near Yankee Stadium in the Bronx, attended an event near Flatbush. “It took me an hour to get there,” she said. “My husband was like, ‘You must really want to learn how to skate.’”

Ms. Kouakam, who lost her job in financial services during the pandemic, finds it exhilarating. “When I put my skates on I’m like a little child,” she said. “There is a part of me that is so happy.” She also enjoys the camaraderie. “These groups, you can be part of their community, and it’s all free. All you have to do is find out about them online,” she said.

Several groups predate the pandemic by decades. Still, the virus can be credited with skating’s renaissance, said Mr. Shah, who has volunteered for Wednesday Night Skate, a weekly event at Union Square in Manhattan that has been around since the 1990s. In 2019, about 50 skaters at the most would meet up, he said. These days, that number has doubled.

The Central Park Dance Skaters Association, perhaps the oldest meet-up in the city, has also benefited from a bump in interest. “There were always a few new people every year, but this year we are getting more than ever,” said Mr. Nichols. “We also have D.J.s coming in who want to play with us because they like the vibe.”

Park visitors like watching the colorful characters, Mr. Nichols said. “You want pink hair, purple hair, baggy clothes, tight clothes, multicolored clothes, we let it all hang out here,” he said. “The only time we stopped someone was when someone showed up in his underpants.”

Long before her nights at the Empire, Ms. Brown skated on the streets where she grew up. “When we were kids, we skated down in Spanish Harlem, in the projects,” she said. “We had a long walkway that went from 102nd Street to 99th Street or something like that. We used to skate back and forth after school or on the weekends.”

During the colder months of the pandemic, Ms. Brown bought a 4-by-8-foot wood board from Home Depot to put over her apartment floors. “I couldn’t skate around, but I could do dance steps at home,” she said.

As the city reopens, Ms. Brown is trying some of the new events around town.

“We went to the Roller Wave this past Saturday. They had a silent disco skate, where you put your headphones on and can switch from R&B to reggae to rap,” Ms. Brown said. “I am going to Lakeside tomorrow in Prospect Park with some friends.” She also takes skaterobics classes in Queens.

“I can find skating any day of the week,” Ms. Brown said. “They are doing it everywhere. It’s really crazy and amazing.”