When the New York City commissioner who oversaw a much-criticized response to a recent snowstorm was told to resign late last week, he refused to go, insisting that he speak directly to Mayor Bill de Blasio.

That, it turned out, was no easy ask: In two and a half years, the commissioner, Joseph Esposito, had not sat down for a one-on-one meeting with Mr. de Blasio, according to the mayor’s public schedules. On Monday, the two finally met at Gracie Mansion to discuss Mr. Esposito’s fate.

The dispute over Mr. Esposito’s status is another recent example of how Mr. de Blasio has maintained a diminished presence at City Hall, allowing his attention to stray more and more. And with a diminished focus at the top, there are signs, as with the Esposito episode where he delegated the task of firing the commissioner to a deputy mayor, that the practical mechanics of government are running less smoothly.

Mr. de Blasio, in fact, rarely meets with many of his commissioners, according to the schedules, at times making it difficult for department heads to advance new ideas at City Hall, or to inform the mayor about problems at their agencies.

The mayor’s arm’s-length relationship with agency chiefs is in keeping with a broader pattern: He has been making fewer and fewer appearances at the office. 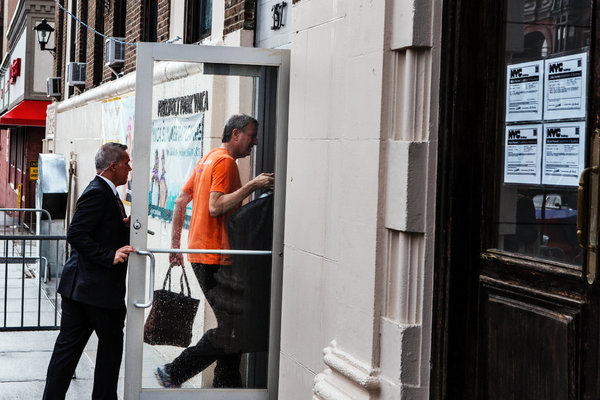 In 2014, Mr. de Blasio spent an average of 19 days a month at City Hall, a busy first year in office that included the creation of universal prekindergarten, the mayor’s signature accomplishment.

But each year, the mayor has shown up less and less. In 2015, he averaged 17 days a month at City Hall; in 2016 it fell to 14; last year, it dropped to nine. This year, through September, Mr. de Blasio averaged 10 days, according to his official schedules.

In July, he was at City Hall for just five days. Above all, the mayor seems to like his getaway days; Mr. de Blasio was at City Hall just four of the first 39 Fridays this year, according to the schedules.

In a telephone interview, Mr. de Blasio strongly defended his management style and focus, saying he had set ambitious goals early in his first term and has continued to deliver results on programs such as early childhood education, affordable housing and improving police-community relations.

“Anyone who watches what I’m doing understands that every hour, every day, including weekends, I’m focused on this work, which is why we’re getting done what we are getting done,” Mr. de Blasio said.

With just over three years left in his term, the mayor said he has a “huge, ambitious agenda” that he believed had his administration “at a great level of intensity working to get it done. I certainly am.”

He rebuffed criticism that he lacked a clear vision for his second term. “There is an animating vision, which is to be the fairest big city in America,” Mr. de Blasio said. “And I think that’s something that people in the administration understand as a mandate.”

The mayor also remains unaffected by criticism over how much time and focus he gives to national matters, and his efforts to be recognized as a national progressive leader. Since his re-election last year, the mayor has taken several trips around the country to attend events, speak out against President Trump on issues like immigration or to campaign for candidates out of state.

In July, he created a political action committee, Fairness PAC, to support national Democratic candidates, and to pay for out-of-state political travel for himself and his wife, Chirlane McCray, such as their weekend trip to Vermont where the mayor appeared at an event sponsored by Bernie Sanders.

While the mayor was away, Mr. Esposito’s status remained uncertain. Finally, on Monday night, after the situation had been well publicized, the mayor’s office released a statement saying that Mr. Esposito would stay on the job while the city searched for his replacement.

“People feel distracted by his interest in focusing on the other stuff, the political stuff,” said one city official who spoke, like several others, on condition of anonymity in order to protect relationships in government. “It’s distracting to those trying to get the work of government done.”

In October, his staff waited until the last minute to organize a ceremony to commemorate the one-year anniversary of the Halloween terror attack on the Hudson River bike path, in which eight people were killed.

The lack of planning showed: City Hall did not notify the relatives of the victims until the day before the ceremony. And Mr. de Blasio failed to read out the names of the victims during the program — doing so only afterward, in an awkwardly delivered tacked-on coda to his prepared speech, in which he mispronounced several names.

Just weeks earlier, bad planning turned another City Hall initiative — an effort to promote voting — into a fiasco when his office at the last minute mailed letters to 400,000 people it identified as having a problem with their voter registration. The letters, which arrived just two days before the deadline to fix registrations, were sent erroneously to thousands of people who had no issues with their registration.

To be sure, the mayor is busy. The schedules show about the same number of total entries each year — more than 2,000 scheduled activities annually, including meetings, phone calls, speeches, parades, policy announcements, news conferences and out-of-town travel. He often holds public events around the city. For a week in July, the month he barely set foot in City Hall, he traveled each day to Staten Island for a series of events called “City Hall in Your Borough.”

But more often, the schedules show the mayor staying away from City Hall, where his senior aides work and where commissioners and department heads are frequently present.

In the past 12 months, the mayor has not met with the commissioners of the departments of buildings, parks, city planning, youth and community development and the Administration for Children’s Services, according to the schedules.

He does meet regularly with the schools chancellor, Richard Carranza, and the police commissioner, James P. O’Neill, according to the schedules, which have been made publicly available through August. But even some agency heads with urgent portfolios have not met the mayor.

For example, Mr. de Blasio has not spoken in person with the correction commissioner, Cynthia Brann, since appointing her to the job in October 2017, even as his administration moves ahead with a plan to build four new jails, shutter the troubled Rikers Island complex and confronts problems with the shift of younger prisoners to a new juvenile facility.

Eric F. Phillips, Mr. de Blasio’s press secretary, said that several of the agency heads who do not appear on the schedules, including Mr. Esposito, had attended briefings or other sessions with the mayor, but he did not provide details or explain why the meetings were not logged in the schedules.

Mr. de Blasio has shifted many of his meetings to Gracie Mansion, which often requires a dozen or more high-level officials whose offices are in City Hall or elsewhere in Lower Manhattan to travel uptown. Aside from the unproductive use of their time to travel back and forth, the officials are also often kept waiting for the mayor, who regularly runs late.

Such scheduling keeps Mr. de Blasio and his visitors behind the wrought-iron gate of Gracie Mansion, out of view from both the press and the public.

“I have found it’s a very productive place to get work done,” Mr. de Blasio said in the interview. “There are fewer interruptions. There’s more ability to focus on strategy and get the solutions. City Hall is a wonderful place, I’ve spent a lot of my life there and I’m there on a regular basis, but it is a place filled with a lot of interruptions and distractions.”

But more than a dozen current and former city officials and civic leaders said in interviews that they were concerned about the mayor losing focus, and they noted that few new ideas or initiatives had been proposed in his second term — certainly nothing on the scale of universal prekindergarten.

For example, the centerpiece of Mr. de Blasio’s State of the City address this year was a push to improve the practice of democracy in the city, with calls for lower campaign contribution limits and more voter outreach.

Last month, voters approved three ballot proposals backed by Mr. de Blasio to enact some of these reforms; the mayor said these results showed that the public understood and embraced his vision.

Other administration officials also disputed that the pace had slowed at City Hall, pointing to the many programs that have continued from his first term, including one to build and preserve 300,000 units of affordable housing, the Vision Zero initiative to prevent traffic deaths and the creation, albeit delayed, of new homeless shelters.

Officials said that the mayor had made a decision with this year’s budget to continue spending on signature programs that he started in his first term, in particular early childhood education, rather than commit future spending to new, big-ticket items.

His proposal, known as 3-K, to expand free schooling for 3-year-olds will require a large amount of financing as the number of children covered increases; the mayor did not want to put in place new programs that might take money away from that, especially given uncertainties about the economy and federal and state financing of the city budget.

Still, the lack of big new ideas has been widely remarked upon by politicians and local leaders, and some, including the City Council speaker, Corey Johnson, have filled the void.

When the mayor initially balked at funding subsidized MetroCards, Mr. Johnson pushed ahead, essentially forcing Mr. de Blasio to agree to the “fair fares” program for needy New Yorkers. The Council also led the way this year with a first-in-the-nation plan to cap the number of for-hire vehicles like Uber and Lyft.

“In the era of term limits, you have to work at continuing to be relevant on the issues facing the city,” said Scott M. Stringer, the city comptroller, noting that Mr. de Blasio cannot run for a third term. “As time goes on, people begin to look past your administration.”

Mr. Stringer, who, like Mr. de Blasio, is a Democrat, said that the mayor has little time to articulate a vision if he wants to carry it out before he leaves office. By early next year, he said, “we’re going to need to hear what the last leg of the journey is going to be about. He has to have a laser-beam focus and an agenda for us to get behind.”

Team members were quarantined for month before launch, and were unable to meet family and reporters as usual. A US-Russian space crew blasted off Thursday…

Meghan and Harry announced their departure from their royal life earlier this year. The couple’s roles within the Palace came to an end on March 31, and they…

Tiger Woods is sued for $30,000 by a golf fan who claims he suffered ‘severe injury and damages’ after star’s caddie shoved him as he…