Just months before seeking re-election, Nicaragua’s president, Daniel Ortega, has brought his country a step away from becoming a one-party state, clamping down on the opposition to an extent not seen since the brutal suppression of anti-government protests in 2018, experts say.

The aggressive moves by Mr. Ortega present an unexpected challenge to the Biden administration, which has made strengthening democracy in Central America one of the pillars of its policy toward the region.

Mr. Ortega’s crackdown reached an inflection point on Wednesday, after his government charged a leading opposition candidate, Cristiana Chamorro, with money laundering and “ideological falseness,” and placed her under house arrest hours after she announced her plans to run for president in the Nov. 7 election. Another candidate, Arturo Cruz, was detained by the police Saturday for allegedly “conspiring against Nicaraguan society.”

Three other presidential hopefuls have been confined to their homes by the police without yet facing any formal charges, effectively preventing them from mounting an electoral campaign.

“Ortega is on the verge of ending all political competition in the country,” said Eliseo Núñez, a Nicaraguan political analyst and opposition activist. “We’re very close to calling this a dictatorship.”

The speed of Nicaragua’s slide toward authoritarianism has taken even many of Mr. Ortega’s opponents by surprise.

Mr. Ortega, Nicaragua’s former revolutionary junta leader, has gradually dismantled the country’s democratic institutions and stifled dissent since returning to power in 2007 after winning democratic elections. More than 320 people, mostly protesters, died in protests against his rule in 2018, making it the worst wave of political violence in Latin America in three decades.

The protests have helped plunge one of the region’s poorest countries into a prolonged economic downturn and led to American sanctions against Mr. Ortega’s top officials, including his wife, Rosario Murillo, who is the vice president and his spokeswoman.

Seeking to ease the economic and international pressure, Mr. Ortega began talks with the opposition following the protests, and reached a deal last year with the Organization of American States to make Nicaragua’s electoral system more fair.

But as last month’s reform deadline approached, Mr. Ortega swung radically toward repression. He has staffed the electoral board with loyalists. He rolled out a series of laws allowing his officials to detain or disqualify from office practically any citizen who has voiced disapproval of the president, including journalists and politicians.

“Ortega did everything the exact opposite of what was expected,” said Carlos Tünnerman, a former senior official in Mr. Ortega’s revolutionary government in the 1980s. “He has shown that he is prepared to do anything to remain in power.”

The government’s boldest move so far has been the surprise arrest of Ms. Chamorro, a scion of one of Nicaragua’s richest and most influential families, whose mother defeated Mr. Ortega in elections in 1990. Ms. Chamorro until recently headed a foundation that trained Nicaragua’s independent journalists with funds partially received from the U.S., leading the government this week to accuse her of money laundering and subversion. 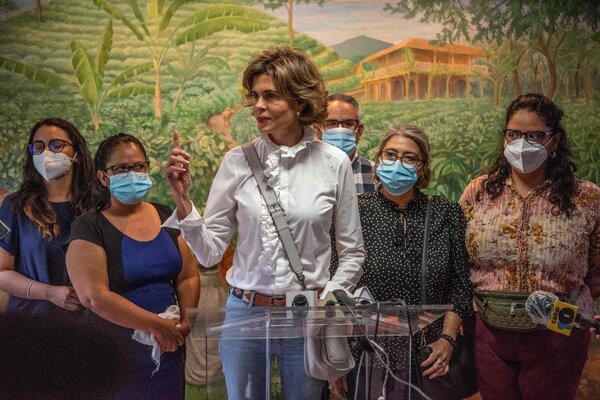 Today, only one credible opposition group remains legally eligible to participate in the November vote, providing the last hope for Mr. Ortega’s opponents. The group, called Citizens for Liberty, is now in the process of choosing its presidential candidate, who would become the de facto flag bearer for the usually fractious opposition.

Political analysts say a serious Citizens for Liberty candidate would have a good chance of mobilizing the bulk of Nicaraguan voters who don’t support the government, presenting a major electoral threat to the ruling party.

Mr. Ortega appears to be taking no chances. On Friday, the government-allied electoral board issued a thinly veiled threat to ban any candidate who doesn’t comply with the new laws criminalizing political dissent.

Opposition leaders said the new directive gives the electoral officials power to ban any candidate who poses a serious threat to Mr. Ortega or his chosen candidate, in effect leaving him unopposed.

“They are clearly open to taking that final step,” said Félix Maradiaga, one of the front-runners to become the Coalition for Liberty’s candidate.

Mr. Maradiaga has himself been confined to periodic house arrest without legal charges since November.

Mr. Ortega’s spokeswoman, Ms. Murillo, didn’t respond to a request for comment on the detention of opposition candidates.

The rapid deterioration of Nicaragua’s democratic safeguards has presented a challenge to the Biden Administration, which was already struggling to halt rising authoritarianism in Central America

“We are definitely evaluating what actions we can take to respond” to the political crackdown, the White House’s chief Latin America adviser, Juan González, told the Voice of America on Saturday.

But major sanctions could tip Nicaragua’s already contracting economy into a crisis, triggering a new exodus of migrants from the region to the United States.

“Ortega had already presided over a war economy — he is showing that he is willing to repeat history,” said Mr. Breda. “The question is, is the U.S. willing to face the consequences of its actions?”