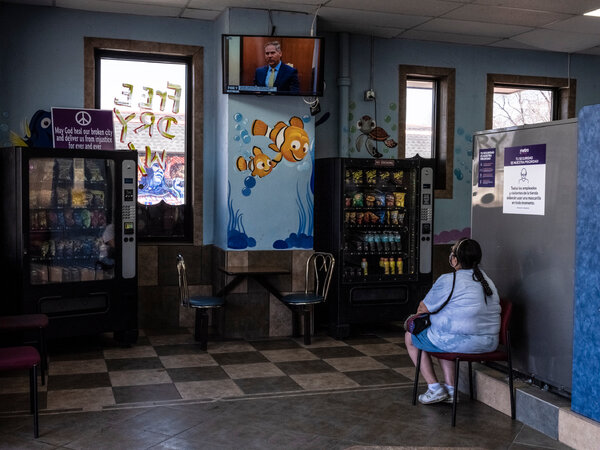 Viewer interest in television coverage of the trial of Derek Chauvin has been high, according to ratings data from Nielsen.

Several cable channels, including CNN and MSNBC, have broadcast large portions of the trial live, and one cable network, HLN, has shown it in its entirety since the proceedings started on March 29. For several days last week, CNN’s highest ratings came in the afternoon, during witness testimony, rather than during its prime-time hours.

On Thursday, roughly 3.7 million viewers were watching trial coverage on the three channels during the afternoon testimony of former Sgt. David Pleoger, who supervised Mr. Chauvin and testified that he should have “ended” his restraint after Mr. Floyd became unresponsive. That audience was larger than the number of people tuning into any other cable program that day. “The Rachel Maddow Show,” the most watched cable show on Thursday, drew three million viewers.

On Monday, the trial continued to attract a large viewing audience. CNN’s 3 p.m. hour, which featured testimony from Medaria Arradondo, the Minneapolis police chief, averaged 1.4 million viewers, the network’s highest total for the day, including its prime-time hours. HLN had an average of 470,000 viewers between 3 and 4 p.m. on Monday, also its most-viewed hour of the day.

The Nielsen figures do not reflect people who watched the trial on separate streaming outlets or on digital devices. Court TV is also broadcasting and streaming live trial coverage in its entirety. Fox News, the most-watched cable news network, has not been carrying the trial live.

HLN, a channel formerly known as CNN2 and CNN Headline News that is owned by CNN’s parent company, AT&T’s WarnerMedia, had its highest daytime ratings since 2013, when it covered the trial of George Zimmerman, a neighborhood watch volunteer who fatally shot Trayvon Martin, an unarmed Black teenager, according to Nielsen. HLN’s audience figures only continued to spike as the week went on.

“The numbers show that there is a high level of interest,” said Ken Jautz, an executive vice president of CNN, who oversees HLN, in an interview.

“This trial raises so many prominent and searing societal issues,” he continued. “Issues of policing practices, and how law enforcement treats people of color.”

The figures are nothing close to interest to the 1995 O.J. Simpson trial. Roughly 50 million people watched the trial’s conclusion from their homes, a figure that may have been three times that size if the number of people watching it at work, at school or in airports or restaurants had been factored in.

The Chauvin trial is expected to last several weeks, and the three cable news networks are likely to continue broadcasting significant portions of it.