The only two men who have led the Manhattan district attorney’s office over the last 45 years were scions of the establishment, leading the country’s most prominent local prosecutor’s office with a traditional emphasis on fighting crime.

Yet Eliza Orlins, Tahanie Aboushi and Dan Quart, three candidates running to be the next district attorney, have consistently argued that if voters want the criminal justice system to change, they should be wary of anyone who has ties to the establishment — or any experience at all as a prosecutor.

In cities around the country, a wave of prosecutorial candidates has won elections by pledging to do less harm to defendants who commit low-level crimes. The nonprosecutorial candidates in Manhattan have taken up that argument, and advanced it, adding that only a leader whose perspective is unblemished by a history of putting people behind bars can make the system less punitive and less racist.

But with a week to go in the race, the trio of candidates have lagged in the fund-raising battle and in available surveys. They have had a hard time distinguishing themselves from one another, and from former prosecutors like Alvin Bragg and Lucy Lang, who have also pledged to help end mass incarceration while arguing that their experience will help them enact change.

Some observers say that the trio’s unilateral criticism of prosecutors has been detrimental to the public’s understanding of the race. Zephyr Teachout, the anticorruption activist, has said that just because Mr. Bragg, whom she has endorsed, has been a prosecutor does not mean that he is not a reformer.

“Some people want to say basically that if you’re a prosecutor you have no business here,” said Ms. Teachout. “This is just nonsense.”

All three candidates have sought to claim the mantle of one of the country’s most prominent progressive prosecutors, Larry Krasner, who when he was first elected Philadelphia district attorney in 2017, had never charged anyone with a crime.

But many of Mr. Krasner’s peers around the country who are considered progressive prosecutors — Kim Foxx in Chicago, Rachael Rollins in Boston, George Gascón in Los Angeles and others — had experience charging crimes before they were elected.

Miriam Krinsky, the executive director of Fair and Just Prosecution, an organization that calls for shrinking the criminal-legal system and increasing transparency, accountability, and fairness, said in an interview that it had become increasingly common for those without any experience to be elected as prosecutors. She cautioned against drawing hard rules about candidates’ past experiences, no matter what they were. 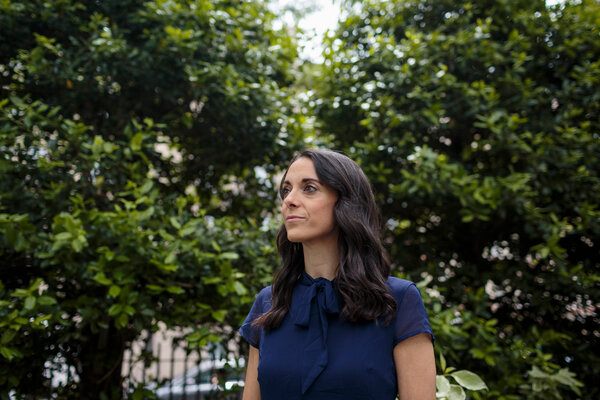 Ms. Orlins, 38, has more criminal courtroom experience than Ms. Aboushi and Mr. Quart. A celebrity on Twitter thanks in part to her appearances on the show “Survivor,” she has been a public defender for the last decade.

Born and raised on the Upper East Side of New York with stints in Hong Kong and Washington, D.C., Ms. Orlins has wanted to be a lawyer since she was a small child. She went to Fordham Law School, graduating in 2008, and joined Legal Aid as a staff attorney the following year.

In her early years with the organization, she said, she was appalled at the machinery of the criminal justice system, which she saw as harshly punitive, particularly toward Black people. Her perspective has not changed.

“I’m fueled by rage at injustice,” she said in an interview. “People say you can’t be motivated by anger and I’m like, ‘Oh yeah? Watch me.’”

Starting in 2016, Ms. Orlins began to vent that anger at Donald J. Trump, then a candidate for president and now a subject of a major investigation within the district attorney’s office. “I DETEST TRUMP!!!!!!!!” she wrote on Twitter in March of that year.

She blasted his supporters online, too, and in October 2016 dressed up as one of them for Halloween, complete with a red Trump campaign hat that she embellished so that it said “Make America White Again.” In August of last year, when she had already announced her campaign, she tweeted threateningly at Ivanka Trump.

Asked about her tweets, Ms. Orlins has said that she does not regret them and will evaluate evidence against the Trump family without prejudice. But legal ethicists have said that her past statements could threaten Ms. Orlins’s ability to lead any potential prosecution of Mr. Trump were she to be elected.

She has vowed to cut the district attorney’s office in half and said that she would decline to prosecute the vast majority of misdemeanors. She has been particularly outspoken about decriminalizing certain forms of sex work: When the district attorney’s office recently announced it would stop prosecuting prostitution, Ms. Orlins took partial credit for pushing them on the issue.

She was narrowly supported by the Working Families Party chapter in Manhattan. But Ms. Aboushi won the group’s overall endorsement, which carries significant weight in New York, although arguably less in Manhattan than other boroughs.

Ms. Aboushi grew up in the Sunset Park neighborhood of Brooklyn, the sixth of ten siblings. When she was 13, her father was found guilty on federal conspiracy charges. Two years later, he was sentenced to 22 years in prison. Ms. Aboushi said that his conviction grants her an understanding of the justice system that other candidates do not share.

“You try not to be defined by that, but it’s literally the center of your world,” she said.

She sped through high school and college, and was 20 when she started law school at Syracuse University. She graduated in 2009 and a year later, started her own law firm.

Through her firm, Ms. Aboushi has taken on more than two dozen civil rights cases. In 2012, she sued the New York Police Department for making a teenage girl take her hijab off after she was arrested. The suit eventually compelled a shift in the Police Department’s patrol guide. She also successfully sued the Fire Department on behalf of Black firefighters in 2018.

Like Ms. Orlins, Ms. Aboushi has said she would cut the district attorney’s office in half and decline to prosecute a number of low-level crimes. Along with the Working Families Party, she has been endorsed by well-known local progressives including Cynthia Nixon and Jumaane Williams, as well as Senator Bernie Sanders of Vermont.

Former prosecutors have expressed frustration with Ms. Aboushi, who has never tried a criminal case, for the way she has characterized her father’s prosecution. They say that because he was convicted on multiple counts related to leading a violent truck hijacking ring and never claimed the conviction had been wrongful, it was misleading for Ms. Aboushi to suggest he was a victim of injustice.

“If you look at the evidence presented in the trial and the charges of which he was convicted, it was a very serious case,” said Daniel R. Alonso, who worked in the prosecutors’ office that charged Mr. Aboushi but was not involved in the case.

Ms. Aboushi said recently that she had never asked her father whether he was involved in a conspiracy but that she knew him to be innocent.

“It’s not a conversation that we have to have,” she said.

Mr. Quart, 49, is the only white man running as a Democrat to lead an office that has only ever been led by white men. He is also the only candidate who has been charged with a crime, for smoking weed at a Phish concert in 1995.

He grew up in Washington Heights and graduated from the law school at St. John’s University in 1997. In 2000, he caught the politics bug after helping a friend with an unsuccessful State Senate campaign. Eleven years later, he won a seat in the State Assembly that he has held since.

Shortly after taking office, he was told by a constituent that young people were being arrested by the thousands for possessing small blades known as gravity knives. Mr. Quart took the issue on, and after seven years of fighting for it, the bill that criminalized the possession of such knives was repealed.

Mr. Quart has not picked up many flashy endorsements like Ms. Aboushi, nor does he have the visible online support of Ms. Orlins. But he has been endorsed by a number of elected officials from Manhattan, as well as several Democratic clubs. He argues that his name recognition and proven support on the Upper East Side is a greater asset than Ms. Orlins’s Twitter army or Ms. Aboushi’s political allies.

The most moderate of the trio, he has emphasized his commitment to public safety in recent weeks. Mr. Quart has limited experience in the criminal courtroom, something that his opponents have used against him.

“There is no world in which he is qualified to be D.A.” Ms. Orlins said. “He shows such a deep misunderstanding of the law.”

His “deep knowledge of the law helped him write and pass the only two changes to New York’s penal code in the past two decades,” she said.