US nurses and other medical workers beg protesters to stay home and abide by coronavirus social distancing guidelines. 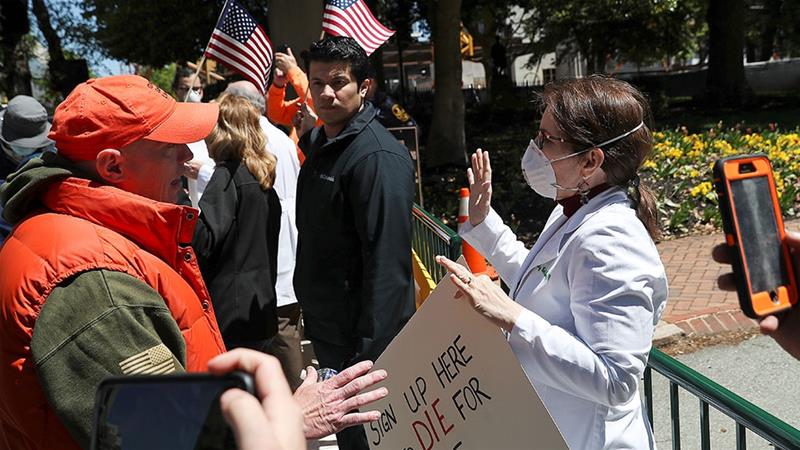 Yetta Timothy says it was heartbreaking to watch people rallying outside Pennsylvania’s capitol building earlier this month to try to pressure the governor to lift a shelter-in-place order meant to stem the spread of the deadly novel coronavirus.

But the registered nursing assistant from Harrisburg, the state capital, stood there anyway, urging the protesters to go home. “I was heartbroken standing there watching and hearing all those cars honking and then holding up their signs,” said Timothy, who held a poster during the protest that read: “My life is on the line. Go home!”

About 2,000 people joined the rally to reopen Pennsylvania on April 20, local media reported. It was one of several protests organised across the United States to urge state leaders to lift shelter-in-place directives and get people back to work.

While these rallies are often sparsely attended, many people have raised concerns about how coronavirus-related restrictions are affecting them financially, and some are struggling to pay their rent or mortgages, buy groceries and otherwise support their families.

About 26.5 million US citizens filed for unemployment in the five weeks to April 18 and White House economic adviser Kevin Hassett warned on Sunday that the national unemployment rate could eventually hit 16 percent.

Some US states, such as Georgia, have started to allow certain businesses to reopen in an attempt to jumpstart their economies. But political leaders, public health experts and front-line healthcare workers like Timothy have urged people to be patient and remain at home to prevent COVID-19, the disease caused by the coronavirus, from spreading.

“It’s not time to reopen the state of Pennsylvania. It’s not time,” said Timothy, who works at a nursing home. “I know there’s other states that have already reopened and I feel like that’s just a disaster waiting to happen.”

US President Donald Trump in mid-April unveiled his “Opening Up America Again” plan to stimulate the economy. Before they can reopen, states are advised to meet certain criteria, such as robust coronavirus testing capacity and a downward arc of COVID-19 cases.

The US government also approved a plan to send stimulus cheques to qualifying citizens to help people make ends meet during the pandemic. But while the one-time payment of up to $1,200 is welcome, it is not enough to meet most people’s needs.

Matthew Bellis, a member of the group ReOpen PA (Pennsylvania), which organised the rally in Harrisburg, said people were struggling under the shelter-in-place orders.

“The government needs to understand that we as individuals are being responsible, we are trying to take measures to be safe, but we can’t hamper the economy any more because the economy is directly tied to not only people’s livelihoods, but their life,” Bellis told local KDKA-Radio host Wendy Bell on April 16.
“We’re not treated as free citizens. We’re treated as subordinates, subjects and we’re not going to allow that any more.”

That message has popped up at rallies across several US states. 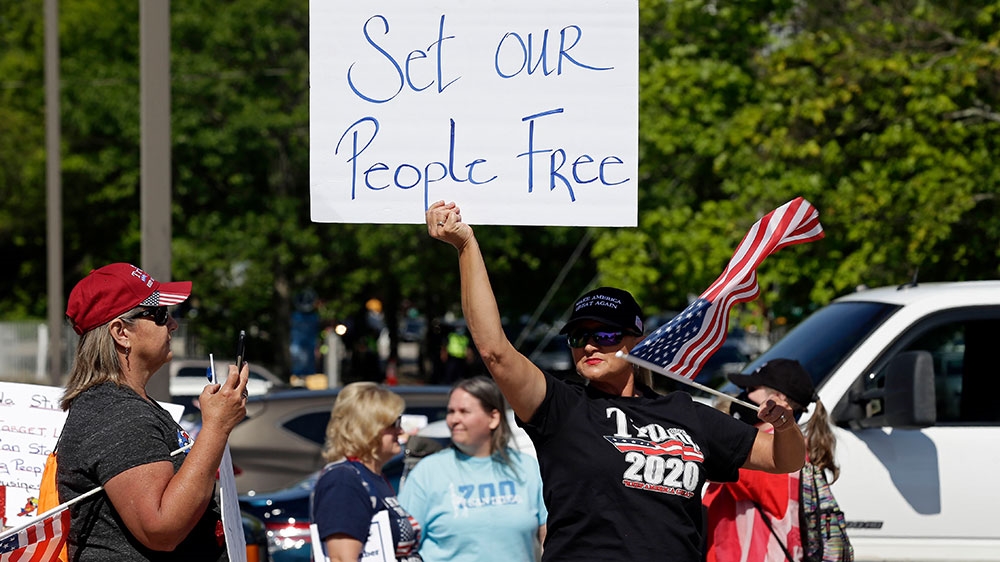 On April 15, Kentucky Governor Andy Beshear held a news conference while protesters rallied outside the capitol building in Frankfort demanding that he reopen local businesses. “Gov Beshear I can protect myself thank you,” read a sign. “Our rights don’t end where your fear begins!” read another.

But Beshear told reporters that reopening the state immediately “would absolutely kill people”. “My job isn’t to make the popular decision, but the right decision and the decision that saves people’s lives,” he said.
Many of the movements to reopen US states also quickly veer into right-wing and often conspiratorial talking points.

The ReOpen Ohio Facebook group’s discussion board, for example, features a series of posts that question the number of COVID-19 cases in the country, criticise “the Left” and US media outlets and compare public health officials to fascists.

‘We haven’t reached the ground’

While the protests have drawn thousands, most Americans appear to be abiding by stay-at-home orders and many fear they may be lifted too soon.

Seventy-one percent of US citizens are worried about lifting shelter-in-place restrictions too quickly, compared with 29 percent who are more worried about doing it too slowly, according to a Yahoo News/YouGov poll released on April 20.

Only seven percent of people – one in 14 Americans – said communities should reopen immediately, the same poll found. 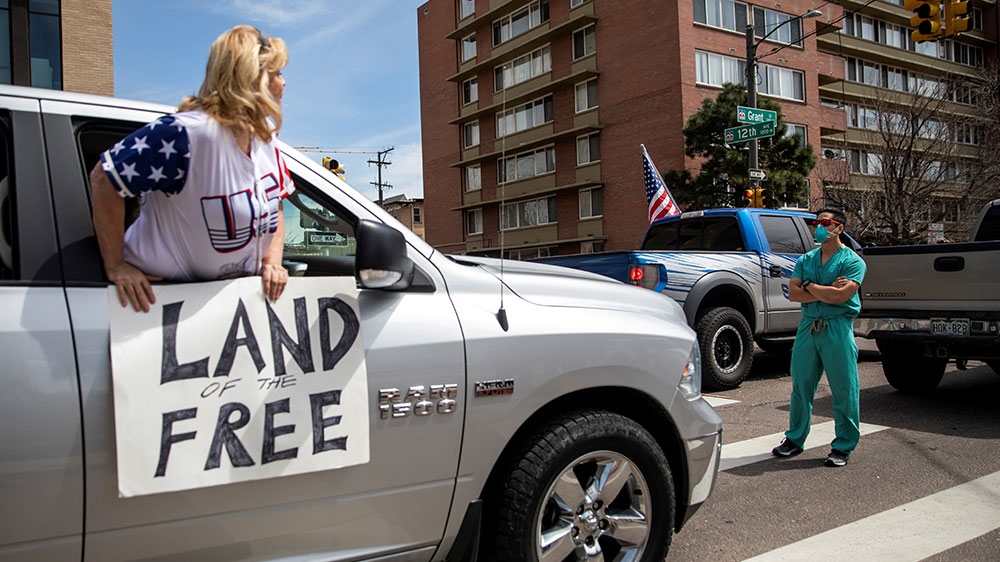 Health workers like Timothy are increasingly coming out – though following social distancing guidelines and wearing PPE – to protest against the anti-lockdown demonstrators.

At least a dozen healthcare workers wearing masks stood across from anti-lockdown protesters in North Carolina on Tuesday, according to US media. They held signs that read: “Stay at home for me” and “I can’t believe I have to show up here too.” Similar actions have taken place in Virginia and Colorado.

Maureen Casey, a registered nurse who works at Penn State Health Milton S. Hershey Medical Center in Pennsylvania, said she understood people’s frustrations and economic anxieties at this difficult time. But she said that opening communities up before it is safe would be detrimental to everyone.

“To say that, ‘I’m willing to risk my health, I want to go back to work,’ great. But you’re not risking your own health, you’re risking other people’s health,” she told Al Jazeera. 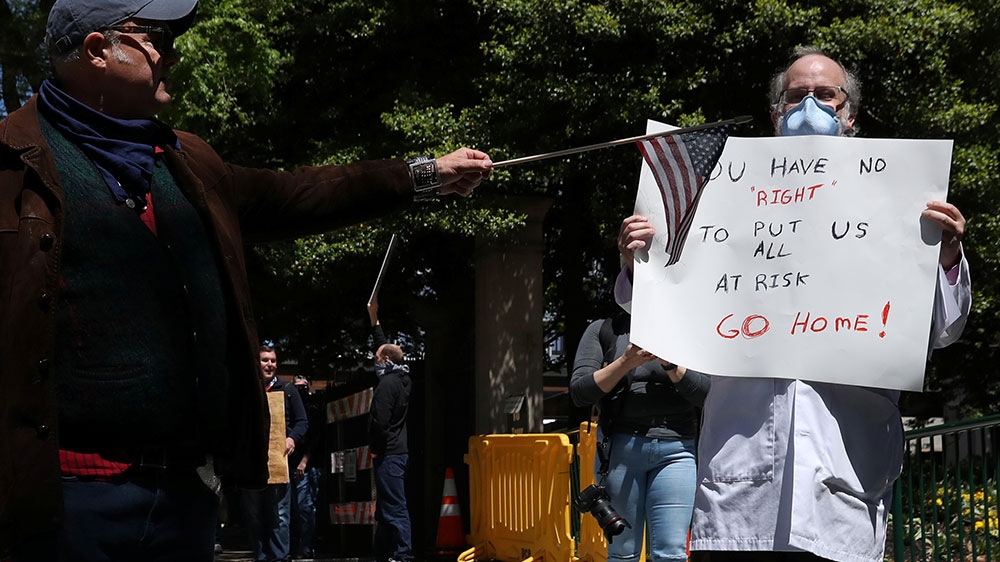 Casey said she believed many of the protesters demanding states reopen immediately did not understand just how infectious and dangerous COVID-19 is – or perhaps did not have family members or loved ones who have fallen ill with the virus.

“If there were a way to have some of these people come in … and hold the iPad for the patient while they say goodbye to their loved ones because they’re about to be intubated, I think then they would understand,” she said.

“Opening everything up would be like saying, ‘Oh this parachute has slowed my descent enough, I think I can take it off now,’ before you’ve actually reached the ground,” Casey added. “We haven’t reached the ground yet.”