It was something of a familiar scene: One by one, the candidates running for mayor of New York City took a turn at the lectern at the Rev. Al Sharpton’s headquarters in Harlem to commemorate Martin Luther King Jr.’s Birthday.

Eric Adams talked about being a Black police officer and invoked another officer’s memory: the one who saved Dr. Martin Luther King Jr.’s life after a stabbing in 1958.

Raymond J. McGuire talked about how his goal was to get the Black community more than just “crumbs” when it comes to economic empowerment.

And Andrew Yang recalled how he campaigned in Georgia in the U.S. Senate races with Martin Luther King III, who is now Mr. Yang’s campaign co-chairman.

For three decades, lawmakers and would-be public servants have turned out at Mr. Sharpton’s National Action Network in Harlem on the third Monday in January to spend a few minutes speaking about Dr. King’s legacy and to court the Black vote, trying to draw church-like shouts of approval from one of the toughest assemblages north of 110th Street.

But this year’s ceremony felt different. The country was days removed from a riot on Capitol Hill aimed at overturning the results of an election in which Black voters played a pivotal role in delivering a victory for the Democratic candidate.

New York City — once the center of the coronavirus pandemic and still reeling unevenly from its effects — is five months away from holding its most consequential mayoral primary election in a generation. 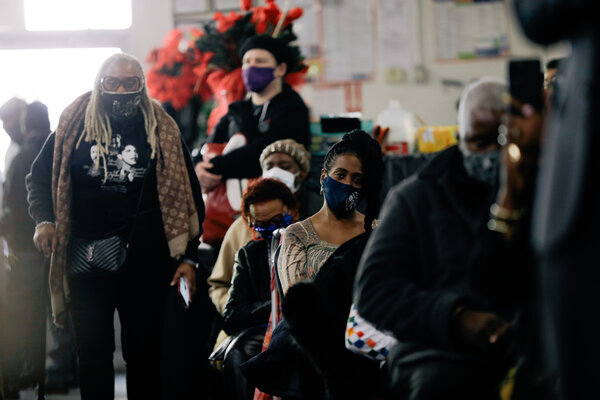 With much of the mayoral campaign being conducted virtually, the Sharpton event was the first public gathering of many of the candidates, and many acknowledged the precarious moment, pledging to enact sweeping policies such as police reform, universal basic income and equity bonds for every child in New York City that would uplift the lives of the city’s most vulnerable.

“We are ending in 48 hours the most bigoted and racist presidential term in our lifetime,” Mr. Sharpton told the audience.

The candidates, he said later, have a tough road ahead with the myriad problems facing the country and the difficulties awaiting whoever is elected to succeed Mayor Bill de Blasio.

“People feel vulnerable,” Mr. Sharpton said. “So we have to have a mayor that makes you feel comfortable that they understand that your basic existence is at stake.”

In spite of the high stakes, the race for mayor is still a messy and amorphous affair. There are established politicians such as Mr. Adams, the Brooklyn borough president, and Scott M. Stringer, the city comptroller. They have both collected massive war chests and a string of important endorsements.

There are wild card candidates like Mr. Yang, the former presidential candidate who attracted a storm of attention, both good and bad, when he entered the race last week; Maya Wiley, the former MSNBC commentator who bolstered her campaign by meeting fund-raising goals; and Mr. McGuire, a former Wall Street executive and favored candidate of the business community who raised $5 million in just three months.

Mr. Yang, the first mayoral candidate to speak, said that universal basic income, the proposal he is most associated with, was based on the beliefs and teachings of Dr. King.

“It was what he was fighting for, what he was assassinated for, a universal basic income,” Mr. Yang said to polite applause.

Mr. Yang added that Dr. King was a revolutionary thinker whose memory “has been sanitized.”

Ms. Wiley said the country “stands at a crossroads” and was “staring down the face of white supremacy.” Falling back on her initial introduction as a police reformer she said that “we the people will tell you the police department what the job is and what the rules of the road are.”

Mr. Adams told the crowd that he had been fighting for the Black community in New York City for decades, even when he was a police officer seeking to reform the department from within. He also recalled how a Harlem police officer, Al Howard, once came to Dr. King’s aid after he was stabbed in 1958.

“I am not new to this, I am true to this,” he said, drawing some of the loudest applause of the day.

Mr. Sharpton spoke highly of Mr. McGuire, defending his background in business and saying that he had secretly financed the efforts of activists to fight for civil rights and against police brutality.

“A lot of us resent the stigmatizing of Black success,” Mr. Sharpton said. “Don’t beat a guy up because he’s successful in a city where we tell every white kid to be successful. He shouldn’t be subjected to a double standard.”

Mr. McGuire leaned into his support from the business community and Wall Street background, saying that he was here to fix the city’s crisis in a way that benefited those who have not always shared in its economic success.

There were no clear winners among the candidates. Dianne Morales, a nonprofit executive and perhaps the most progressive candidate in the race, said the current tensions the city and nation are seeing are part of the ongoing struggle to realize Dr. King’s vision of a “radical redistribution of political and economic power.”

Zach Iscol, a former Marine, spoke of how his combat experience had shaped him; Shaun Donovan, a former federal housing secretary under President Obama, suggested providing $1,000 “equity bonds” to every child in New York City, a proposal last heard from Senator Cory Booker of New Jersey during the presidential campaign.

Loree Sutton, the former veteran affairs commissioner, slightly flubbed the melody and some lyrics when she led the crowd in a rendition of “We Shall Overcome,” but the crowd persevered, carrying her to the end of the song.