Only a tiny number of black students were offered admission to the highly selective public high schools in New York City on Monday, raising the pressure on officials to confront the decades-old challenge of integrating New York’s elite public schools.

Another highly selective specialized school, the Bronx High School of Science, made 12 offers to black students this year, down from 25 last year.

These numbers come despite Mayor Bill de Blasio’s vow to diversify the specialized high schools, which have long been seen as a ticket for low-income and immigrant students to enter the nation’s best colleges and embark on successful careers.

But Mr. de Blasio’s proposal to scrap the entrance exam for the schools and overhaul the admissions process has proved so divisive that the state’s most prominent politicians, from Gov. Andrew M. Cuomo to Representative Alexandria Ocasio-Cortez, have mostly avoided taking a definitive position — even as black and Hispanic students are grappling with increasingly steep odds of admission into the city’s eight most selective public schools.

Students gain entry into the specialized schools by acing a single high-stakes exam that tests their mastery of math and English. Some students spend months or even years preparing for the exam. Stuyvesant, the most selective of the schools, has the highest cutoff score for admission, and now has the lowest percentage of black and Hispanic students of any of New York City’s roughly 600 public high schools.

Lawmakers considering Mr. de Blasio’s proposal have faced a backlash from the specialized schools’ alumni organizations and from Asian-American groups who believe discarding the test would water down the schools’ rigorous academics and discriminate against the mostly low-income Asian students who make up the majority of the schools’ student bodies. (At Stuyvesant, 74 percent of current students are Asian-American.) The push to get rid of the test, which requires approval from the State Legislature, appears all but dead.

Attempts to diversify the schools without touching the test have failed. Neither the expansion of free test prep for minority students nor a new plan to offer the specialized high school exam during the school day made a dent in the admissions numbers.

The mayor and other supporters of the effort to overhaul the admissions system cited the statistics released Monday as the clearest evidence yet that the system is broken.

“These numbers are even more proof that dramatic reform is necessary to open the doors of opportunity at specialized high schools,” Mr. de Blasio said.

But at the same time, a slew of prominent Democrats in Albany and downstate, ranging from the city’s public advocate to the Democratic leaders of the Assembly and Senate, either declined to comment or issued statements that indicated the latest numbers are unlikely to change their positions.

Dani Lever, a spokeswoman for Mr. Cuomo, pointed to the governor’s previous comments on the proposal, saying, “It’s a legitimate issue that there are two sides to, and that should be looked at in the wider discussion of education in New York.”

The president of Stuyvesant’s alumni organization did not reply to requests for comment. Larry Cary, president of the Brooklyn Technical High School alumni foundation, said the numbers did not highlight a flaw in the admissions system, but rather the general lack of high-quality education for black and Hispanic students.

Jumaane Williams, the city’s newly elected public advocate and a graduate of Brooklyn Tech, said his opposition to completely scrapping the test remains unchanged. “The numbers are abysmal, we knew that,” said Mr. Williams, who is black. “The question is what do we do about it, how do we do it without needlessly pitting communities against each other?”

John Liu, the state senator from Queens who chairs the Senate’s New York City education committee, said any proposal should consider the needs of the Asian-American community. “A desegregation plan can only be effective if the problem is viewed as a whole, and one that is not formulated to the total exclusion of Asian-Americans,” he said.

The question of how to racially integrate the city’s elite high schools underscores how hard it is to tackle educational inequality and discrimination. It is a struggle playing out in real time as the future of affirmative action is being challenged at Harvard University and as last week’s college admissions scandal revealed the extreme ways in which wealthy and well-connected families try to game admissions. 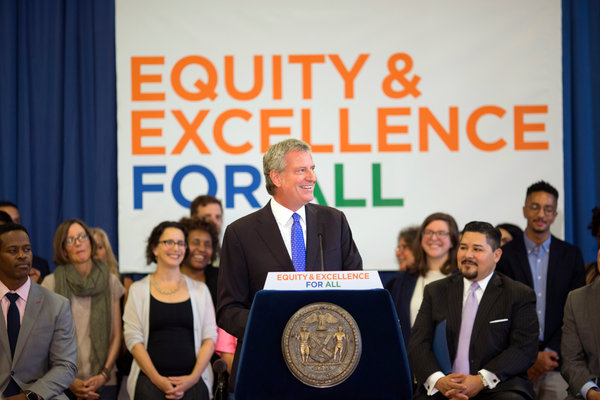 Though black and Hispanic students make up nearly 70 percent of New York City’s public school system as a whole, just over 10 percent of students admitted into the city’s eight specialized high schools were black or Hispanic, according to statistics released Monday by the city. That percentage is flat compared to last year.

Of the nearly 4,800 students admitted into the specialized schools, 190 are black — compared to 207 black students admitted last year out of just over 5,000 offers. About 5,500 black students took the admissions exam this year out of a total of about 27,500 applicants. Of the five specialized schools that were added under former Mayor Michael Bloomberg’s administration, only one, the Brooklyn Latin School, has a larger percentage of black applicants who were offered seats: 57 out of 540.

The number of Hispanic students who gained admission to Bronx Science also dropped from 65 last year to 43 today.

The numbers are a stark reminder that the exam tends to produce specialized schools with classes that do not reflect the school system as a whole, despite years of efforts to use free test preparation to bring more black and Hispanic students into the schools.

The specialized school admissions process has been protected by state law since 1971, but last summer, Mr. de Blasio asked for Albany’s approval to scrap the exam and replace it with a system that admits the top performers from every city middle school.

Though the city has acknowledged that it could implement that system at five of the eight schools — not including Stuyvesant, Bronx Science or Brooklyn Tech, whose admission system is controlled by state law — Mr. de Blasio has argued that such action would create a confusing two-tiered system that would fail to diversify the schools with the fewest black and Hispanic students.

A recent report found that offers to Asian-American students, who now make up about 60 percent of the specialized schools, would drop by about half under the mayor’s plan, while offers to black students would increase fivefold if that plan is approved.

Critics of Mr. de Blasio’s plan have expressed frustration that he did not offer the Asian-American community any concessions, such as a new specialized high school, for all the seats they would lose under the proposal.

The city is relying on a less sweeping part of its plan to help force a measure of integration as soon as this fall: the expansion of Discovery, a summer program that prepares students who just miss the cutoff score for admission into a specialized school.

Though the city has not yet released data about this year’s Discovery class, officials said they believe the plan to set aside 20 percent of seats for Discovery students at each specialized school over the next two years will roughly double the number of black and Hispanic students in those schools.

But with so few black and Hispanic students in the schools, the bigger issue is the future of the test. Over the last few months, city officials have taken their plan to abandon it on the road, trying to sell it in local town hall meetings. They have faced furious parents from the Upper East Side to Bedford-Stuyvesant, Brooklyn, who have at turns accused the city of trying to destroy the schools and of focusing too much on a tiny number of schools at the expense of the larger system.

In Albany, the issue has taken a back seat to more popular progressive legislation, including voting reform and abortion rights.

Democratic leaders in the Senate and Assembly have not signaled any willingness to champion an issue that appears to be a political loser; Assembly majority speaker Carl Heastie recently said his conference had not even raised the matter in talks.

And this past weekend, Ms. Ocasio-Cortez did not take a position on the admissions proposal when she spoke about the specialized high schools at an event in her Queens district.

Instead, she argued for broad school improvement, noting that her father traveled across three boroughs from the Bronx to Brooklyn Technical High School.

“My question is, why isn’t every public school in New York City a Brooklyn Tech-caliber school?” she asked, to applause from the audience. “Every one should be.”