Producing it was a messy, time-consuming affair that did nothing to improve Congress’s reputation for dysfunction. But by the time the House and Senate had agreed on the terms of a pandemic aid package, it showed the ascendance of a moderate new force in a divided Senate and validated President-elect Joseph R. Biden Jr.’s belief that it is still possible to make deals on Capitol Hill.

Along with struggling Americans and businesses, the incoming president was a major beneficiary of the $900 billion pandemic stimulus measure haltingly but finally produced by Congress, which will give him some breathing room when he enters the White House next month. Rather than face an immediate and dire need to act on an emergency economic aid package, Mr. Biden and his team can take a moment to instead try to fashion a more far-reaching recovery program and begin to tackle other issues.

“President-elect Biden is going to have an economy that is healthier,” said Senator Mark Warner, Democrat of Virginia and one of the chief players in a breakaway effort by centrists in the Senate and House that led to the compromise. “This is a significant financial injection into the economy at a time that is critical.”

The group of moderates was essential to the outcome, pushing Senate and House leaders of both parties into direct personal negotiations that they had avoided for months. Had the leaders not moved forward, they risked losing control over the legislation as the compromise forged by the centrists gained momentum with members of both parties. That was a possibility that Senator Mitch McConnell, the Kentucky Republican and majority leader, was eager to avoid in the interest of keeping his tight grip on the Senate.

“I’m glad we forced the issue,” said Senator Susan Collins, the Maine Republican who, along with Senator Joe Manchin III, Democrat of West Virginia, were leaders of a monthslong effort to break the impasse over pandemic aid even as the virus exacted a growing economic and health toll on the country.

Given the slender partisan divides that will exist in both the Senate and House next year, the approach could provide a road map for the Biden administration if it hopes to break through congressional paralysis, especially in the Senate, and pass additional legislation. Mr. Biden has said another economic relief plan will be an early priority.

“I believe it is going to be the only way we are going to accomplish the president-elect’s agenda in the next two years,” said Representative Josh Gottheimer, Democrat of New Jersey and a leader of the 50-member bipartisan Problem Solvers Caucus that took part in forging the compromise. “In the long run, this is the way to govern.”

But the extraordinarily difficult time Congress had in coming to terms over pandemic legislation demonstrated once again just how difficult a task Mr. Biden confronts. Almost every influential member of the House and Senate acknowledged the relief was sorely needed, but it was impeded in part by last-minute Republican attempts to undercut Mr. Biden’s future authority. Some Republicans are already suggesting that the latest package should tide over the nation for an extended period, with no additional relief necessary for some time. 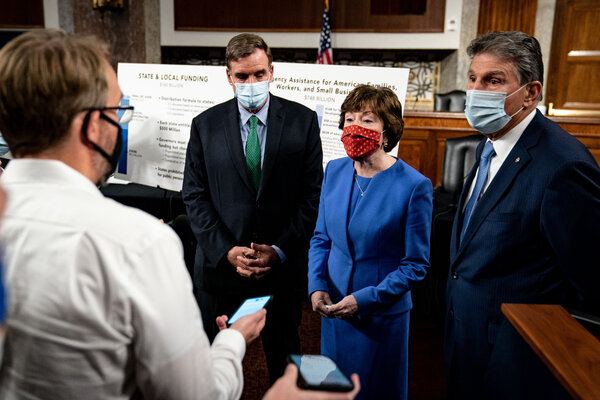 Mr. Biden on Sunday applauded the willingness of lawmakers to “reach across the aisle” and called the effort a “model for the challenging work ahead for our nation.” He was also not an idle bystander in the negotiations.

With Republican and Democratic leaders in the House and Senate far apart on how much they were willing to accept in new pandemic spending, Mr. Biden on Dec. 2 threw his support behind the $900 billion plan being pushed by the centrist group, a total equal to less than half of the $2 trillion Speaker Nancy Pelosi and Senator Chuck Schumer, Democrat of New York, had been insisting on.

Mr. Biden’s move was not without risks. If it had failed to impact the discussions, the president-elect risked looking powerless to move Congress, even before he had taken the oath of office. But members of both parties said his intervention was constructive and gave Democrats confidence in lowering their demands.

“It helped a lot with the Democrats because it told them he doesn’t want to have a worsened economy and more serious unemployment and a shortfall in vaccine money when he takes office,” Ms. Collins said.

Deep disagreements over the spending level had been an impediment since the spring, when Mr. McConnell balked at another round of pandemic relief, saying he wanted to pause and see how the more than $2.8 trillion already allocated was being used. Democrats, on the other hand, were pushing a sweeping, $3.4 trillion measure that would never pass the Senate, including as much as $1 trillion in relief for state and local governments that Mr. McConnell called a nonstarter. Then the rescue plan got caught up in the November election, and any chance for movement died even as the crisis persisted and the economic situation of millions worsened.

With the election over, the centrists renewed their efforts; eight of them met at the Capitol Hill home of Senator Lisa Murkowski, Republican of Alaska, on Nov. 17 to exchange ideas and plot strategy. In contrast to other such efforts in the past, the participants decided to put ideas hashed out in what were described as tough negotiations into actual legislative language — not just a series of principles or talking points. That gave heft to their proposal, and negotiators said it would serve as a model for the future.

“We didn’t just give them a memo with concepts,” said Senator Richard J. Durbin of Illinois, the No. 2 Democrat who participated in the talks despite his role in the party leadership. “We gave them an actual bill.”

The proposal provided concrete evidence of an alternative to the dug-in positions of the leaders in both parties, with substantial bipartisan support in both the House and Senate. Ms. Murkowski said the legislation was never intended to be an all-encompassing solution but instead represented a “lifeline” to get hard-hit Americans through a crisis that Mr. McConnell himself conceded Saturday was a “five-alarm national crisis.”

“We presented that multi-hundred-page package to the public, to the administration, to leadership,” Ms. Murkowski said. “We basically said, ‘Here is a gift. Take it.’ ”

Mr. McConnell was not so eager to unwrap the present. Bipartisan negotiating groups, often known as “gangs” on Capitol Hill, can be seen as a threat to leadership. To the dismay of the negotiators, the majority leader quickly dismissed the compromise legislation. But after months of delegating the negotiations with Democrats to the Trump administration, Mr. McConnell became personally involved and began talks with Ms. Pelosi, Mr. Schumer and Representative Kevin McCarthy of California, the House Republican leader.

While the centrists might have, in Ms. Murkowski’s term, lost “ball control” of the legislation, they were satisfied that their work provided the framework for the eventual outcome. Mr. Schumer credited them with “unlocking” the stalled talks.

“I think we broke the log jam,” said Mr. Warner.

Those who took part in the negotiations saw their efforts as a good example of what can occur when the White House and Republicans and Democrats on Capitol Hill decide they want to compromise rather than trade accusations over who is responsible for stalemate. Members of the centrist group said they had been approached by many other lawmakers interested in participating in the next round of talks.

But pursuing such compromises requires accepting steep political risks, including defying party leaders, breaking with colleagues and being willing to settle for something less than some in one’s party would prefer.

“There is nothing wrong with working together and getting 80 percent of what you want instead of insisting on 100 percent,” Mr. Gottheimer said. “This is about actually governing. It is a different model. It is not the one that gets you clicks, but it is how you a get a bill.”