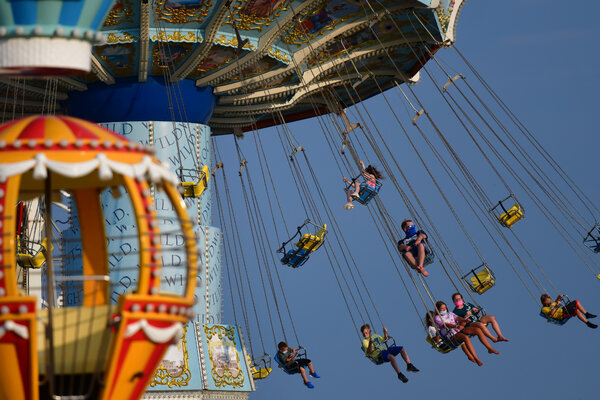 With the U.S. summer tourist season looming and vaccinations gathering steam, summer camps, amusement parks, beachside hotels and restaurants — anticipating an influx of visitors — are confronting a dramatic shortage of seasonal workers. It is threatening to sabotage their best efforts to stay financially afloat after more than a year of pandemic-fueled economic hardship.

Now small business and industry groups are pressuring the Biden administration to relax international travel restrictions and visa application protocols that would allow for more foreign workers to do the jobs that they say American citizens are unwilling to take.

Morey’s Piers, a seaside amusement park in Wildwood, N.J., needs to fill 1,500 jobs, including roller coaster operators, lifeguards and ticket sellers by the middle of June. To recruit, the company has advertised openings on 12 billboards in the region, joined virtual jobs fairs at high schools and tapped its network of former employees.

But so far, it has managed to fill less than a quarter of the positions, and a key source of its seasonal work force in previous years — foreign students from more than 30 countries — is unavailable because of pandemic restrictions. Now executives worry they may have to limit hours or keep certain rides closed for the entire season.

“We have about 350 filled right now so I’m not sleeping at night,” said Denise Beckson, the company’s vice president of human resources. “We’re really optimistic about visitor demand this summer, but we’re very concerned about staffing.”

In March, President Biden allowed a ban on foreign worker programs imposed by former President Donald J. Trump to expire, and approved an additional 22,000 HB-2 seasonal, nonagricultural worker visas. In late April, over 500 companies and industry groups that depend on the J-1 foreign student work visa program, urged in a letter to the State Department to relax travel restrictions and waive certain requirements like applicant interviews in an effort to supplement their American work force.

But even as vaccinations increase in the United States, the push for more foreign workers is colliding with public health concerns over a global coronavirus surge fueled by the rapid spread of more contagious variants. Last month, the State Department announced it will expand its “do not travel” guidance to about 80 percent of countries worldwide, including many that are sources of seasonal foreign workers, citing “unprecedented risk to travelers” from the Covid-19 pandemic.

“What we’re hearing universally from employers and sponsors is that there are not enough Americans interested in what they’re able to employ for the summer,” said Ilir Zherka, the executive director of the Alliance for International Exchange, a lobbying group which sent the letter. “They’re trying to look for ways to incentivize more American employees, but also for support from the State Department.”