JERSEY CITY, N.J. — Of all the toxic dumps in New Jersey, perhaps none was more infamous than PJP Landfill.

It was here, at the edges of the Hackensack River in Jersey City, that underground fires erupted spontaneously for more than a decade, belching acrid smoke so thick it could snarl traffic on an adjacent bridge, the Pulaski Skyway, a key link for commuters to New York City.

Firefighters tried dousing the smoldering land in the mid-1980s with 300,000 gallons of water a day, but residents complained that the spraying did not help.

A reputed mobster who had used the property when it was owned by the Roman Catholic Archdiocese of Newark even claimed that it was the final resting place of the world’s most notorious Teamster: Jimmy Hoffa.

Now, 30 years after the dump was held up as the poster child for toxic nightmares by the New Jersey congressman who wrote the Superfund law, plans for a phoenixlike rebirth await. 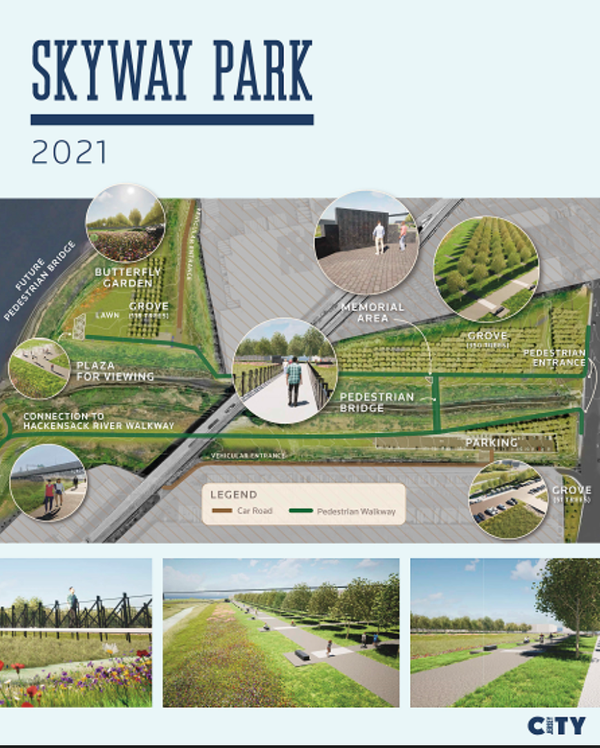 It is about to be added to the ranks of wastelands reinvented as wonderlands, joining Fresh Kills on Staten Island, Mount Trashmore in Virginia and Sai Tso Wan Recreation Ground in Hong Kong.

The site, which was designated a Superfund priority in 1983, is being converted into a public park with one of the nation’s first memorials to victims of Covid-19.

As part of a $10 million makeover, more than 500 trees will be planted in a grove of the newly named Skyway Park — one for every Jersey City resident who has died of the coronavirus, the mayor, Steven M. Fulop, announced on Thursday.

Each person’s name will also be included on a memorial wall, giving relatives of the dead a place to mourn. Many families were unable to observe traditional funeral rituals as the pandemic ravaged the Northeast.

“We wanted to do something significant for those families that didn’t get to grieve properly, and we’re taking a step forward in that direction,” Mr. Fulop said. “It has been a tough year for the city.”

For Mr. Fulop, the pain is personal. His grandmother died of Covid-19, and the City Council lost one of its members to the virus in April, Michael Yun.

Vernon Richardson, who was an aide to Mr. Yun, said the park would “represent the resiliency of the city — everyone from those who died to those who loved them to those who just had a bad 2020.”

The site, polluted by hazardous chemicals when it was used as an industrial landfill in the 1970s, has been remediated and capped to make it safe for visitors, but extra soil will be brought in for planting.

Once the park is complete — likely next summer or fall — walkways will wend along the river, through a pollinator garden and beside green spaces lined with flowers and reedy grasses native to the low-lying wetland area. A pedestrian bridge designed in the image of the Pulaski will connect two sides of the 32-acre site, which is bisected by a stream known as the Sip Avenue Ditch.

A formal Covid-19 memorial installation will be erected beneath the bridge; visitors will be able to walk between the rows of trees on paths that run perpendicular to the main promenade.

“To come into Jersey City from this west side, and to see a grove of trees, is going to be a beautiful thing,” said Mira Prinz-Arey, a Jersey City councilwoman. “It will be improving the quality of life for our residents in the area who have basically no green space at all.”

The idea for the park was planted more than 12 years ago when Bill Matsikoudis, the city’s former top lawyer, proposed buying the property. The $12.7 million purchase was finalized in 2012.

“To see a place that constituted one of the most polluted parcels in the United States of America be returned to nature — a place where trees and wetlands and egrets can make a home — is extraordinary,” said Mr. Matsikoudis, who ran for mayor against Mr. Fulop, a fellow Democrat, in 2017.

The memorial grove of trees, Mr. Matsikoudis added, is “fitting in so many ways.”

“They’re a sign of life,” he said. “They’ll bring oxygen into a community that was choked for so long.”

A public housing complex sits across a four-lane highway from the landfill, at the edge of the Marion neighborhood, an historically Italian enclave.

Decades ago, neighbors held community meetings and demonstrations, demanding action that eventually paved the way for emergency funds that were used to put out the fires for good.

On Thursday, as politicians and environmentalists gathered next to the river, they invoked that past and noted that the wheels of environmental justice often turn slowly.

“In a sad way,” said Bill O’Dea, a Hudson County commissioner who was on the Jersey City City Council in the 1980s, “you have to wait 35 years to see the end of that process.”

The park is a key element of a longer-term goal: creating a walkway along the Hackensack River that would stretch more than 10 miles from Bayonne north to Secaucus. A similar planned walkway, the Hudson Essex Greenway, would connect Jersey City, Secaucus, Kearny, Newark, Belleville, Bloomfield, Glen Ridge and Montclair.

Bill Sheehan, who leads the Hackensack Riverkeeper, a nonprofit environmental group, noted the importance of creating open vistas in communities crowded with tall buildings. Eagles, he said, now nest in nearby Kearny.

“When I was a little boy living in Jersey City, the idea of an eagle anywhere near Jersey City was totally off the rails,” Mr. Sheehan said. “Today we’ve got eagles, we’ve got plenty of fish in the river.”

Still, the site’s industrial past is never far from mind.

The Pulaski’s 3.5-mile black-steel span and smokestacks from a power plant across the river dominate the horizon. Planes headed to and from nearby Newark Liberty International Airport leave streaks of smoky white entrails in the sky. The adjacent lots hold an imposing distribution warehouse and an e-commerce company.

Phillip (Brother) Moscato, a reputed member of the Genovese crime family who grew up in Jersey’s City’s Marion section and died in 2014, reportedly said in interviews that Hoffa was buried in a plot under the Skyway, inside a 55-gallon drum. The body of the Teamsters union boss, who disappeared in 1975 near Detroit, has never been found.

A half-mile away, a large sculpture of a man holding a rolled-up green carpet stands in the shadow of the Skyway’s on-ramp, an image made famous by its appearance in the opening credits of the HBO Mafia hit “The Sopranos.”

Mr. Sheehan said it was time to bury that sordid chapter for good.

“Someday soon, Skyway Park will be an open, natural area along the shores of this awesome and cleaner-than-ever river, a part of the rebirth of the green coast of Jersey City, a stop along the Hackensack River Walkway and a world-class park,” he said.

“Today is only the first step.”