Pearl Chin, the founder of Knitty City, a yarn shop on the Upper West Side of Manhattan that became an inclusive sanctuary for urban knitters — even offering a men’s night — as well as a hub for social activism through the craft arts, died on Oct. 27 in Manhattan. She was 71.

Her husband, Arvin Chin, said the cause was complications of lung cancer.

When Ms. Chin opened her shop, on 79th Street near Amsterdam Avenue in 2006, she had hoped to make it more than a supply stop for yarn. She envisioned it becoming a cozy haven for New York knitters, a place to which they could escape the city’s bustle and devote themselves to therapeutic acts of creation involving only a needle and a ball of thread. And that’s what it became.

“It’s just a piece of string, but you can build so much with it,” Ms. Chin said in a video interview in 2019. “We tell people, Do 15 minutes of knitting every day, and it will change your life.”

She played classical music over the speakers, and Lenny, a miniature poodle who napped next to his water bowl, became an unofficial mascot. (He died this spring.) Catherine Zeta-Jones and Bernadette Peters were said to have perused the cubbies overflowing with vibrantly colored varieties of yarn. 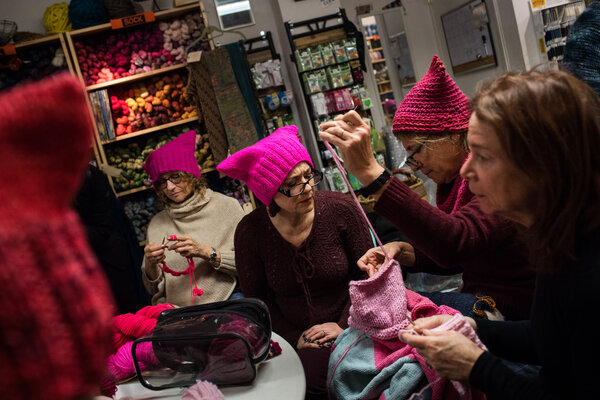 Ms. Chin offered free knitting lessons in the summers at Bryant Park, the gathering spot marked by a wool scarf hoisted over the park’s Gertrude Stein statue. And she hosted a fashion show at the now-closed City Bakery, on West 18th Street near Fifth Avenue, where guests sipped hot chocolate while admiring knitwear from up-and-coming designers.

In recent years, Ms. Chin introduced an activist spirit to her shop, hosting “knit-ins,” in which people crammed inside in the weeks leading up to the Women’s March on Washington in January 2017 to weave hundreds of pink hats with cat ears for the Pussyhat Project. That fall, people gathered to learn how to make prosthetic knitted breasts for women who had undergone mastectomies. Ms. Chin also curated a panel on the history of “craftivism” in America.

“I don’t think that when I started the store I was thinking about the yarn; it was about the people in the yarn world,” Ms. Chin said last year in an interview with Considerable.com, adding that people “would not only come here once a week — they would come every day.”

Pearl Doris Lee was born on Aug. 14, 1949, aboard the SS President Wilson, a passenger ship that was on its way to San Francisco from China. (The ship was near Hawaii at the time.) Her father, Robert Foo Lee, was bringing his wife, Yuet (Fung Chin) Lee, back to America with him. The family settled in Houston and opened a grocery store. Pearl grew up working there with her brother and two sisters.

She attended Jefferson Davis High School in Houston (now Northside High School) and then studied at the University of Hawaii at Manoa, where she earned a bachelor’s degree and then a master’s degree in education. Returning home to Houston for Christmas one year, she met Mr. Chin at a party, and they exchanged weekly letters for years before getting married in 1975.

After Ms. Chin graduated, she joined him in New York, where he was studying medicine at what is now Weill Cornell Medical College. She got a job as a computer programmer for Time Warner.

When she was pregnant with her daughter, she came across a copy of Barbara G. Walker’s “Learn-to-Knit Afghan Book” and caught the knitting bug. She also discovered origami, and her crafting passion grew. In the 1990s, as she raised two more children, she started a wholesale company, “A Thousand Cranes,” and began selling origami jewelry and greeting cards made from traditional Japanese washi paper. She initially ran the operation out of her kitchen until it grew.

Her knitting passion resurfaced some years later, when her daughter, Julie, then in her early 20s, became an avid knitter.

Her children have all worked in Knitty City and her son Zachary is now its manager.

In addition to her husband, son and daughter, Ms. Chin, who lived in Manhattan, is survived by another son, Derek; a brother, David; two sisters, Yvonne and Deborah; and a grandson.

When the coronavirus pandemic hit, Ms. Chin closed Knitty City just before New York City’s lockdown began in the spring. She learned she had cancer in August and was admitted last month to the intensive care unit at Tisch Hospital in Lower Manhattan, part of NYU Langone Health.

Knitty City reopened over the summer, again offering a balm to its customers in an anxious time.

Julie Chin said her mother had believed in the restorative effects of knitting.

“I think my mom saw it as therapy,” she said. “She knew that customers were coming in and just working something out.”