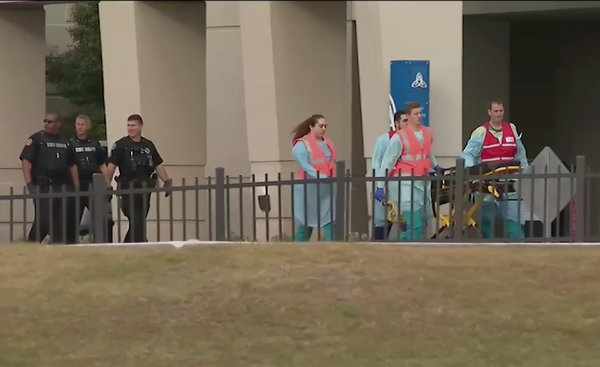 The gunman opened fire in a classroom before 7 a.m.

Three people were shot dead by a gunman who opened fire early on Friday at Naval Air Station Pensacola, the authorities said.

Sheriff David Morgan of Escambia County said one of his deputies killed the gunman at the base, which employs more than 16,000 military personnel and 7,400 civilians. Two deputies were shot, in the arm and the knee, but are expected to recover, the sheriff said.

Capt. Timothy F. Kinsella Jr., the base’s commanding officer, declined to identify the gunman or say whether he was a serviceman. The shooting took place in a classroom building on the base, where training is routinely conducted, he said. Captain Kinsella declined to “speculate” on whether the shooting was being investigated as an act of terrorism.

Kathy Bowers, a spokeswoman for Baptist Hospital in Pensacola, said that the hospital had received eight patients. One of the victims transported to Baptist later died, according to Chief Deputy Chip Simmons of Escambia County. Two other victims died on the base, he said.

The identities of the victims have not been released.

Officials began receiving calls about the shooting about 6:50 a.m., and the base was put on lockdown.

“Walking through the crime scene was like being on the set of a movie,” Sheriff Morgan said.

He added that the authorities were not looking for any additional gunmen.

President Trump and the Florida governor are monitoring the situation.

President Trump has been briefed about the shooting and was monitoring the situation, the White House said. Vice President Mike Pence said in a message on Twitter that he was “saddened” to hear about the “horrible” shooting.

Gov. Ron DeSantis of Florida said Friday morning that he was receiving updates about the shooting at the base and was offering full support to law enforcement.

The base “is a huge source of pride for all of Northwest Florida,” said Representative Matt Gaetz, whose congressional district includes Pensacola.

“I know there are places all over the country where, at times, there is tension between a military mission and a community, but in our home, this is who we are,” he said. “This is what we love, and it’s why our hearts break today.”

The base at Pensacola, on Florida’s Panhandle, dates to the 1820s and is considered by the service to be the home of naval aviation. Since World War I, most Navy and Marine Corps aviators and flight officers have begun their flight training there, and it is where the Navy’s Blue Angels flight demonstration team is based.

Doug Underhill, a county commissioner for the district where the base is, said grief counselors would be arriving for those who need their services.

The shooting was the second this week at a Navy base.

The first, at Joint Base Pearl Harbor-Hickam in Oahu on Wednesday, came as that installation was preparing for the 78th anniversary on Dec. 7 of the Japanese attack that marked the United States’ entry into World War II.

A United States sailor opened fire at a dry dock at the base, the Pearl Harbor Naval Shipyard, fatally shooting two shipyard workers and injuring another before killing himself, the authorities said.

The motive for the shooting is not yet known. It was also not clear whether the active-duty sailor targeted the three shipyard workers — Department of Defense civilians — or fired indiscriminately.

The sailor was assigned to the U.S.S. Columbia, a submarine docked at the shipyard for maintenance, Rear Adm. Robert B. Chadwick II, commander for the Navy in Hawaii, said.