Nasa’s latest mission to Mars has beamed back the clearest ever footage seen of the red planet in a video that even has sound. The US space agency’s Perseverance rover transmitted the clip to Earth on Friday morning.

A camera mounted atop the robotic spacecraft panned around Mars’s surface, showing its vast deserts in broad daylight. Perseverance’s cameras are also equipped with microphones.

Scientists believe Mars to be entirely devoid of life, and the clip was silent, bar the low hum of the rover’s camera arm as it spun the lens around. Perseverance landed on Mars on Thursday afternoon after a 293 million mile flight that took off from Cape Canaveral in Florida in July 2020.

Nasa staff pulled off an extremely complex set of maneuvers to land the $2.2billion spacecraft – the first successful landing on Mars since its earlier Phoenix spacecraft landed in 2007. 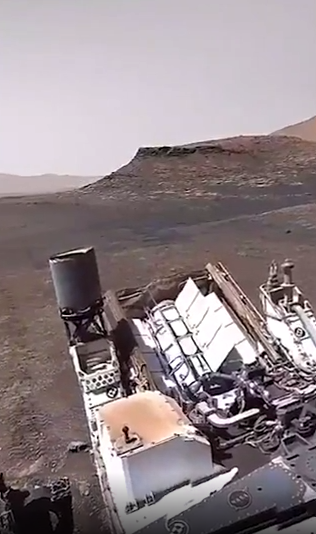 Perseverance will collect samples while on Mars, and leave them in designated spots around the planet’s Jezero crater.

A future mission is intended to return these samples to Earth by 2031, giving humans their first hands-on experience of another planet.

Jezero is once believed to have housed a huge lake, with scientists hopeful that rocks taken from it may indicate signs of ancient life.

The latest groundbreaking mission will see a drone called Ingenuity attached to Perseverance make the first ever flight on another planet.

Ingenuity will have two cameras attached, and will help Nasa scientists learn how to fly aircraft on a planet whose atmosphere is just 1% of the density of that experienced back on Earth.

Perseverence is powered by nuclear energy, with its Mars mission expected to last a year.

It should also provide information that could help humans eventually travel to Mars.

Russia says it plans to send people to the Red Planet sometime between 2040 and 2045, with Nasa also in very early planning to do the same.